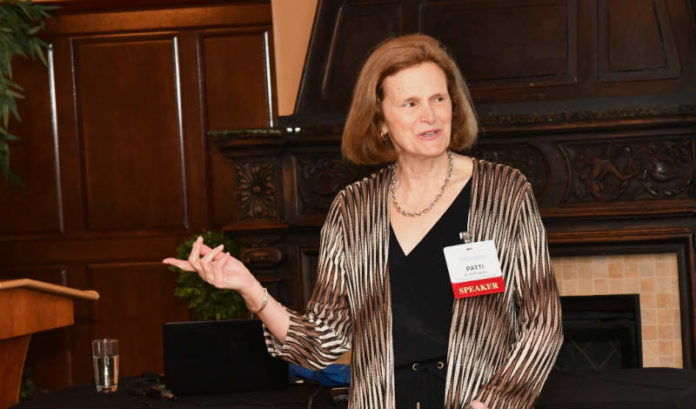 When Dima Ghawi shattered a vase on stage at the NJBankers’ eighth annual Women in Banking Conference, it was not for dramatic effect or to garner attention, but instead was symbolic of shattering one’s own fears and limitations.

The motivational speaker and leadership coach told her story to more than 400 women in attendance last week at The Palace at Somerset Park in Somerset.

From leaving the pressures of the Middle Eastern culture she was raised in behind, to coming to the United States and working her way to leadership roles in companies such as IBM, Ghawi inspired women to shatter their own fears and take on the challenges they face in the workplace.

In a breakout session about “Understanding Unconscious Bias in the Workplace,” Patti Ippoliti, president of PI Associates and assistant professor at Rutgers Business School, said that bias is one of those challenges.

“Unconscious bias refers to a prejudice of which an individual is unaware, and which he or she does not have the ability to consciously control,” she said.

The Rutgers professor said 24 percent of people in the financial services field experience gender discrimination while job searching, something unconscious biases can play a role in.

Additionally, 30 percent of women believe recruitment in the industry is biased toward men and, among the 47 percent of management and professional roles in American financial firms held by women, women only hold 6.3 percent of CEO roles and 22 percent of board positions, she said.

This lack of diversity can be bad for a company’s bottom line, too. She explained the benefits of diversity.

“There’s better performance coming out of more diverse and inclusive teams — it has been researched and it’s proven,” she said.

“… The second (benefit) is there is a significant change in demographics,” she said.

In her presentation, Ippoliti demonstrated how the population of the United States is changing.

In the year 2065, Ippoliti said, the United States workforce is expected to consist of 46 percent white workers and 54 percent nonwhite workers — highlighting the need for inclusion as the workforce becomes more diverse.

To promote diversity and inclusion and avoid unconscious bias, she said to question first impressions, understand how different experiences can impact behavior, use objective criteria in workplace decision making and hold people accountable.

Ghawi said the time is now for women to break their own fears and limitations in the workforce, and, as it grows more diverse, there will be a shift to focus on women, as they are a largely untapped network in the field.

“Don’t doubt yourself, push through it … the path will never be easy,” she said.