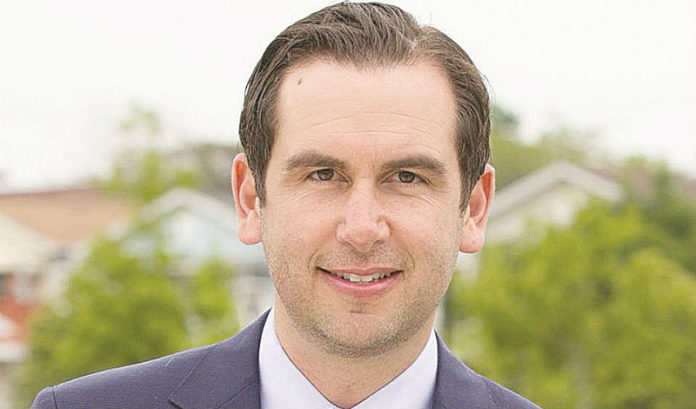 It has been 20 months since Jersey City Mayor Steve Fulop announced his support for Phil Murphy to be the next governor of New Jersey.

It was shocking news at the time; many still considered Fulop one of the front-runners.

And it led some to believe Fulop’s political career was over — even though he was just 39 at the time.

Fulop, in a recent meeting with ROI-NJ, explained his emotions on that day — and why he decided to drop out of the race.

“When we did that press conference for Phil, I wasn’t in a great place mentally, because I was torn,” he said. “I had built a lot of relationships around the state, I learned a lot about some of the different counties, and then I made this decision, and it wasn’t really a great place for me, to be honest.”

Fulop said he came to the realization that there wasn’t a path to victory for him. A realization, he said, that came when he realized the other supposed front-runner, state Senate President Steve Sweeney, also wasn’t going to run. (Sweeney dropped out of the race eight days later.) “Ultimately, people ask me why I made the decision not to run,” he said. “There were all these crazy theories about it. I was going to be called as a witness to Bridgegate; didn’t happen. There were health issues, there was a scandal. None of that stuff materialized now that we look back a year and a half later. It was really just a simple calculation, and nothing more than that.

“I did not believe that Senate President Sweeney was going to run for governor. And I didn’t think he was because he re-engaged in a fight, again, with all the public-sector unions at the time — if you remember, we’re talking in the fall of 2016 — over the quarterly payments of the pensions. I thought the landscape there was very difficult for him. I said to him that I thought he had problems with the Democratic base, there was a really tough route for him, if any route for him to win, and, ultimately, he would have come to that conclusion.

“And, because I’d haven’t been shy about criticizing some of the political bosses in New Jersey, I thought ultimately Steve Sweeney’s relationships would never go with me, because I’ve always been outside the machine. So, I thought they shifted to the guy who had tons of money and was sort of a blank canvas, Phil, at the time. I thought that the route was difficult for me and I would have to choose between giving up this job or running for office. I couldn’t do both.”

“I like this job,” he said. “So, I made a decision and said, ‘I like what I’m doing,’ and I wasn’t willing to risk it. That was really it, ultimately. It was not some big thing — it was just me thinking through what the math was to get there, and was I really willing to walk away from a job that I like for something that I thought was a difficult route, for the reason that Steve Sweeney wasn’t going to run.

“If Steve Sweeney stayed in the race, I thought there was a route for me based on some of the policies that we did and being outside the political infrastructure that existed in the state. In a two-man race where all of the political structure was with someone who had a lot of money, it was a very difficult route for me. So, I thought, ‘Go endorse Phil Murphy,’ and people would go in that direction and create that push that ultimately did happen. I think I had a big part in helping Phil close everything out really quickly, ultimately.”

Some have said the decision to drop out so suddenly — and without telling many other Democratic leaders — will hurt Fulop’s chances at higher office moving forward. Fulop doesn’t see it that way.

“I got here with no help from anybody other than residents,” he said. “None of these political machine people helped me along the way. All these people, none of them were out there publicly saying they were with me.

“It’s easy to say that you’re with somebody when you’re whispering at a small dinner table amongst friends. But everyone who was doing those whispers was not out there publicly saying, ‘I’m 100 percent with Steve Fulop.’ They feel they are entitled to some sort of head’s-up, and I just don’t see it that way.

“It was a tough decision, there was no right way to do it. But I had to make a decision that I thought was ultimately the best for Jersey City and ultimately the best to move Phil into a position where he would be successful. If I had told 30 people, ‘This is what I’m thinking of doing,’ it wouldn’t have worked out the same way, for sure. People probably wouldn’t have felt the pressure to move around Phil. There would have been no sense of urgency. People would have made their own deals. It would have been very difficult.”

The move, he said, has only helped his relationship with Murphy, which he says is “good.”

Fulop said Murphy is doing better than some are saying.

“I think he’s very fair and earnest and trying to do the best job,” he said. “There’s definitely a learning curve on this; you’re dealing with some tough personalities. I think the insiders might have mixed feelings about his performance until now, but his track record in life is overwhelming being a success story, whether it’s running for governor or being an ambassador or Goldman Sachs. Whatever he’s really engaged in, it seems it’s worked out fairly well for him.

“I think the people who are criticizing him — I’m sure it hasn’t been the best six months from a political standpoint, but I’m not sure he’s been as involved in that or cares about that. We’ll see where it goes, but I wouldn’t count him out after six months of this job.”

Fulop said he has been rebuilding his own brand since dropping out of the run for governor.

“It took some time to slowly rebuild here,” he said. “We started on the committee seats, we started to really focus on blocking and tackling here, and slowly getting back some of that energy and fire that we had that initially got me here. And, most importantly, just trying to play mistake-free, not making the same errors that we did when I was sucked into this conversation around the governor’s race.”

It’s why, he said, his outward demeanor has changed.

“The last year has been really, really great,” he said. “Historic numbers in Jersey City on the mayor’s race, big plurality, 78 percent. I feel that we’re in a good place politically and governmentally, so, maybe it’s a little bit more freedom to do what I want.

“But I just think I’m in a better place mentally overall. I think that’s probably what people are seeing.”