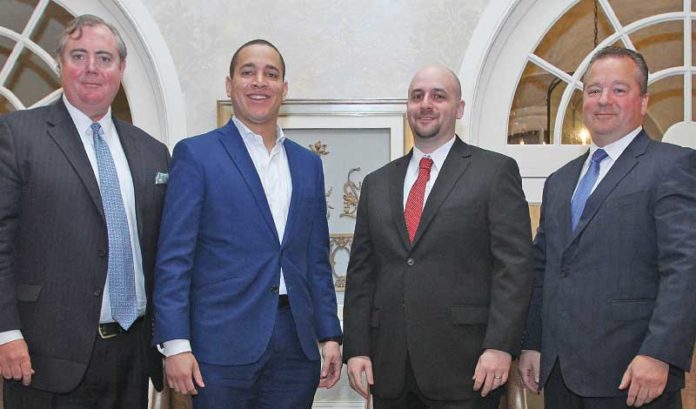 A new administration brings new development ideas. And new federal tax laws impact everything. That’s why we brought together four experts for an ROI Thought Leadership Series panel at North Jersey Country Club in Wayne. Here’s a look at some of their remarks.

ROI-NJ: Let’s start with the biggest question in real estate: How important are incentives to the real estate community — and how will changing (or eliminating) them, as Gov. Phil Murphy has indicated may happen, impact the sector?

Nevins McCann: In talking to the Murphy administration, they are facing major budget issues. And, when those tax credits start coming on line, it increases the budget every year to make up for those payments. I think the Murphy group thinks it was an enormous giveaway. I did a number of Grow New Jersey deals myself, and it did bring in companies we otherwise would not have had. That’s why Gov. (Chris) Christie and his administration thought it was important to keep those projects going and keep the jobs rolling. That’s not going to happen under Gov. Murphy’s administration. What’s going to change? We don’t know. We’ll have to see.

Andrew Somple: During Gov. Christie’s administration, businesses were comfortable here. We’ll have to see how that goes.

Simon Filip: You have to look at the new tax laws and how it will impact the Grow New Jersey programs. The tax code provisions that have reduced the corporate business tax seem to undermine that type of tax incentive financing program. Grow New Jersey is going to have less appeal.

ROI: OK, let’s move to another big issue in the sector: cannabis. Many have said those in real estate will benefit as much from the expansion of the marijuana industry as those in cultivation and distribution of the product. What is the appetite for real estate in the cannabis world?

KD: National companies here are excited, and they are willing to pay a premium for the space. But, then, they kick it up to the CEO who sits (outside the state) and it gets blocked. They can’t do the deal because of what they hear from (Attorney General Jeff) Sessions and how they are going to crack down on it. As long as the federal government continues to crack down, it’s going to be difficult for the local groups — if they are a part of a national company.

AS: Our phone is ringing off the hook looking for warehousing. The cannabis industry coming in is a new business. It’s a new industry. So, there’s lots of potential opportunity.

NM: I think what Gov. Murphy is struggling with is bringing in revenue to the state. I was behind a big push to bring gaming to northern New Jersey. It’s a no-brainer, because the market is up here. That’s revenue dollars that unfortunately we’re not taking advantage of. With cannabis coming in, he’s thinking this will be another revenue producer. Expanding the medical tripled or quadrupled the number of people eligible. What we are seeing is the big companies coming in — they like the market, they like the demographics, they like where we’re located. And they are looking for warehouse space.

ROI: Let’s switch to affordable housing. How are the new rules impacting an industry that has been waiting for new guidelines for decades?

NM: It’s definitely upsetting the apple cart. And 90 percent of the developers would rather not have to deal with it, but it’s becoming a reality. In Jersey City, they really want to push that downtown has affordable housing. And there are no (payments in lieu of taxes) unless you do affordable housing. It causes pause on a project to figure out how to do it, because they are not used to doing it. It’s not stopping projects, but it’s certainly causing pause as they have to figure out how to do it, how to make the capital stack work.

ROI: Speaking of new rules, how is the new tax law impacting the industry?

SF: The most popular concern now is the new 199A deduction. Under the new tax code, they lowered the corporate rate to 21 percent, so they had to give something to the small business entities. This allows for a 20 percent deduction on qualified business income. We get a lot of questions: Do I qualify for this 199A deduction, how is it going to affect my income taxes and after-tax cash flow? And they included a provision for 199A for real estate. Rental projects do qualify for the 199A deduction, but it’s very limited. You need to see how it works for you.

ROI: What else could slow things?

AS: Unemployment. Companies may start having trouble getting people. When Amazon wants to open another fulfillment facility, they might have problems getting people. Look at the American Dream project, it is supposed to produce 20,000 jobs. If unemployment is 4.5 percent, where are they going to get those people from? And, if we’re going to raise minimum wage, where is the money coming from?

ROI: OK, the next trend. We’re actually hearing a new trend is the return of an old one: condos. Any truth to that?

NM: Yes, the condo market is growing. For the last 10 years, it’s just been multifamily, multifamily, multifamily, which has done well. There’s been a lot of talk about whether there is too much on the market and whether it can absorb all those units. We’ve come to realize that there isn’t a concern about absorption, because kids are coming to New York or Philadelphia every year after graduation looking for jobs and they are looking for places to rent. And we’ve come to realize that they may not want to leave.

They are looking to stay in those urban areas if they can, but there hasn’t been that much product for condos. Some of the wise developers are starting to see that opportunity. It’s not the condo glut that we had 15 years ago, but it’s starting to come back.

AS: I think you may start to see this in areas that are not considered the hottest urban areas. Consider Hackensack. I understand the appeal of Hoboken, I understand Brooklyn and I understand Jersey City, but we have 2,000 to 2,500 apartments coming out of the ground right now. I think the conversation changes if it’s for sale. It gives somebody the opportunity to live in an urban area.

SF: It makes sense from a tax element. The cost of homeownership has actually increased. There’s not going to be that big benefit of owning your own home. This could be an alternative.

ROI: Any other trends?

KD: Here’s how hot New Jersey industrial real estate is: We’ve done three projects recently where they are taking office buildings in suburban areas and tearing them down and turning them into big-box industrial warehouse to service the city. That’s going to be an emerging trend that’s going to continue.

We asked our panelists for thoughts on the future of business in the state:

Kevin Dudley: I was in New York. I was one of the group that was talking about moving to New Jersey, so me and my wife and kids moved out to Ridgewood for the schools and all those things. So, I love it here. It’s a great place for business and industry to thrive. And I think even with these changes, because of the city, because of e-commerce, because of the port, we will be sheltered a little bit.

Simon Filip: There have been a lot of changes in the past few months, and I think everyone should call their accountant and look at their real estate projects: How do they affect you and your clients? Underwriting, what is the after-tax cash flow going to be to your clients? Is that something they are comfortable with. What are the other rules regarding 199As and Opportunity Zones? There are a lot of new things that everyone has to get comfortable with.

Nevins McCann: Born and raised in New Jersey and I’m bullish on the future. I do think there are budgetary issues ahead of us for the state. I think we are well-positioned and well-situated to weather this storm and we’ll find ourselves back on top shortly.

Andrew Somple: Born and raised in New Jersey. The problems that we have are a lot better than we had in 2008. For the first time in my career, I had some sleepless nights about getting some financing done on a couple of our projects. We’re not there. Our problems are growth problems. We’re between New York and Philly, Washington and Boston, so we’re pretty insulated. I’d just like to see an administration to think that the driver in all of this is business.