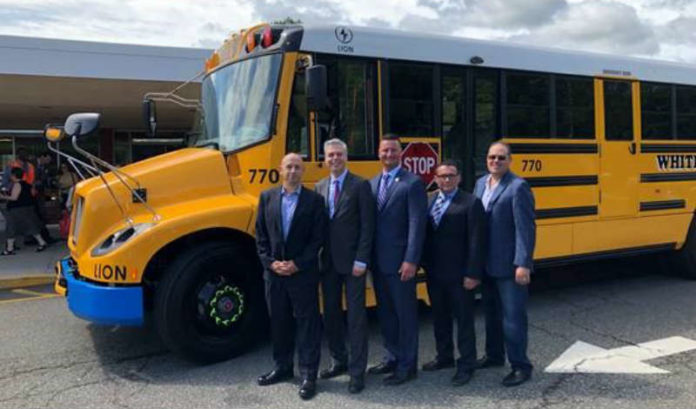 Electric school buses are coming to the East Coast — and a New Jersey company is leading the way.

Alex Cherepakhov, chairman and CEO of Flanders-based First Priority Group, presented a demo bus Tuesday morning at a media event in White Plains, New York. Next week, the company will deliver five buses to the school district, which will begin using them next fall.

First Priority Group, which began deploying electric school buses in California at the start of 2017, will have nearly four dozen on the road once the shipment arrives in White Plains.

It’s a number Cherepakhov said makes First Priority Group the leader in the sector in the country.

“This is evidence that the environmental message is not only getting through, it’s starting to spread out,” he said. “It’s an example of the combination of politics, business and child welfare coming together.”

The buses are manufactured by The Lion Electric Co. and First Priority Group. The buses cost approximately $380,000 to produce. Traditional buses cost about $100,000.

Cherepakhov said First Priority has delivered more than 40 buses to all parts of California. A number, he said, that is growing.

“Our first deployment was 29,” he said. “What we’re finding in California is that, when superintendents get them, they soon want more.”

Cherepakhov said he’s confident that will be the case on the East Coast, too.

All of this begs the question: Why not New Jersey?

Stunningly, a seemingly outdated law is holding things up.

Cherepakhov said he is eager to bring electric buses to New Jersey, but he said the company (and the state) need to work around a bus-size issue that is preventing deployment, he said.

“New Jersey is now the only state in the country that says the maximum width of school buses is 96 inches, which is the width of a commercial vehicle,” he said. “These buses are 102 inches.”

Cherepakhov said a movement in the Legislature this year to amend the width requirement didn’t go far — but he’s confident it may soon. And he’s also working on plans to build buses that are of the smaller size.

“We have not yet rolled out anything in New Jersey, but we expect to later this year,” he said. “If that rule was able to be changed today, there could be electric school buses on the road tomorrow.”

Cherepakhov said he can be patient. He’s confident his company will be the top player in the market because it not only sells the vehicles, it provides service and support, too.

“First Priority has more electric buses deployed than everyone else in the country combined, by a fairly large margin — and we expect our inventory on the road to increase substantially by the end of the year,” he said. “We feel comfortable doing that because of our ability to service them.

“That serviceability and being the support for school districts as they roll out this new technology is, to me, the critical link of why First Priority is the answer.”

Cherepakhov said his company is ready to grow with the movement.

“This is really the first movement East of the electrification of school buses that started in California.”

Report: Murphy to select UNCF exec Bridges as next secretary of...