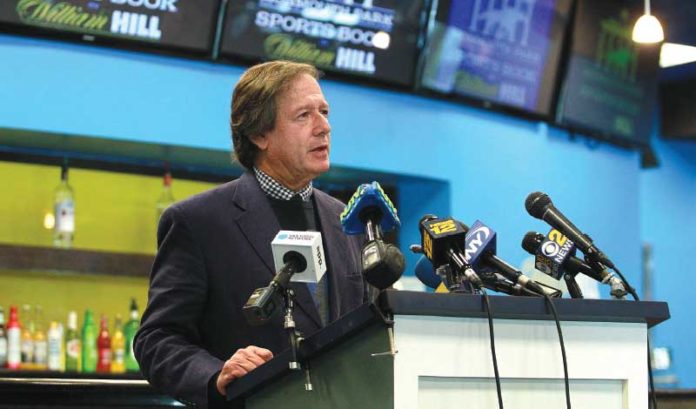 Monmouth Park CEO Dennis Drazin wasn’t worried when the state lost its chance to be the first to implement sports betting, nor was he worried when Gov. Phil Murphy took a whole weekend to review the legislation — bypassing a chance to bet on the NBA Finals.

“I’ve been a supporter,” Drazin said. “Listen, I was focused on getting him to eventually get here to make the first bet, which he’s doing. He’s a Monmouth County guy. He lives across the river from where I grew up. I think it’s important to him to let Monmouth Park be a leader in this, and he delivered on that.”

Murphy did more than that. He delivered the first (legal) sports bet in New Jersey history, putting $20 on Germany to win the World Cup and $20 on the New Jersey Devils to win next year’s Stanley Cup.

Monmouth Park, and the state, are hoping it’s the first of many bets and proves to be a much-needed revenue generator.

Drazin, meanwhile, sees it as a savior for Monmouth Park.

Drazin sat down with ROI-NJ prior to the opening bet last Thursday and discussed the seven-year saga that led to the historic day, as well as his thoughts on the future of the horse racing industry and Monmouth Park.

ROI-NJ: Did you ever lose hope or worry this day would never come?

Dennis Drazin: I had a 95-plus-percent confidence level. And you might say, ‘Did you ever worry that you were wrong?’ I never did. You might’ve said in the early years, when we kept losing, that possibility certainly was out there. I wasn’t as confident. I always thought we were right legally, and intellectually, but we kept losing. But, once I heard the Supreme Court arguments on Dec. 4, I knew that we were going to be able to go forward, so I didn’t see any risk in going forward at that time.

ROI: During those years, you were forced to get creative in order to keep the racetrack afloat, and also invested $3 million in the sports bar and grandstand expansion. How did you do this?

DD: We did free play, we did fantasy sports, we did real sports-bar-type, without doing sports betting, so we became popular as a venue for people to come to. We did some music here, we got crowds here. We tried to create a database to market it better. We do good horse racing business here, so, even if sports betting never came, it was a good thing for the track. So, this was a good investment either way. In addition, William Hill is contractually obligated to build a $5 billion-plus venue on the clubhouse side, which will be like a Las Vegas-style sports book, so that will increase the capacity we will have. We will also have kiosks.

ROI: Even though everyone knew you were fighting this battle, they weren’t all prepared to join in on Day One, with the exception of Borgata. How do you feel about being the first out of the gate?

DD: Originally, we moved forward for reasons that others could not. Others were all concerned — I’m the only one that doesn’t have a license in other states, so I didn’t have regulatory concerns that I might have from elsewhere. And everyone else did. They all kind of said, ‘You’re leading the charge, let’s see what happens to you.’ And most of them didn’t think I could win. At the end of the day, I felt very strongly that we would win; the others thought I was chasing a wild dream.

ROI: Is it going to help your brand?

DD: We probably couldn’t have gone out and spent $5 million to $10 million to get the national press that we’ve gotten being the leader in this fight. So, Monmouth Park already has a recognizable name and a recognizable brand, and I think that’s going to help us in the process.

ROI: When you first started the legal battle, racetracks and casinos in the state were having a rough time. The legislation allows you both to partner now. Is that likely?

DD: New Jersey had a glorious history with both casinos and racetracks, until the surrounding states started to do casinos and racinos. The casinos learned over the years, probably 20-30 years ago, they were all about gaming and taking in the money through games. But, now, in the past 10 years, they’ve refocused and said, ‘Non-gaming revenue represents a significant percent of our income,’ and they’ve focused on developing that aspect of the business. And I’ve been looking at that ever since we took over here. The online may not be as good for your revenue, but it brings people out to the racetrack. The online multiplies the venues. So, it dilutes the market a little bit. So, it’s all about the branding, of how you market your property.

ROI: And that spills over into sports betting, too, right?

DD: Unfortunately, we don’t have casino gaming, because that’s a monopoly in Atlantic City. But all the surrounding states have hundreds of millions of dollars in casino revenue supporting their infrastructure and they don’t have to worry about the things I have to worry about. But, now, we’ve been given the opportunity with sports betting, so we can play on an even playing field. At the end of the day, this is good for both casinos and racetracks — so it’s a symmetry and a common goal, and even though they weren’t there before, they certainly are pressing it now. In the past, there hasn’t been a working cooperation between casinos and racetracks, so I think, as a state, we’ll all benefit from it.

ROI: How competitive is the market going to be?

DD: As time goes on, a year from now, I think the casinos will be on board. But I think Monmouth Park represents about 10 percent of the state. If you take that $400 billion (illegal industry) and take it to how much of a market share is New Jersey — it’s probably a $10 billion market. So, 10 percent of that $10 billion, that’s about $1 billion in total annual revenue. That’s a significant amount if you look at the win on that, even after we pay our taxes. I’m going to have enough money to do the things I want to do for the horse industry.

ROI: How does horse racing benefit by adding the sports wagering product?

DD: We can increase our days, we can offer better purses, we can help the breeding industry come back. The jobs will be saved — racing alone is 13,000 jobs. Casinos are bigger. We preserve 176,000 acres of open space, we are a $4 billion industry, and racing is important to New Jersey, as is open space, and this is going to give us security that we don’t have to worry about tomorrow. One thing people have to understand is, this is a $400 billion illegal industry now that is run by the offshore companies and bookies with mob ties, and, whether I like to think this or not, I think the truth is many of our horse players are betting sports also.

ROI: The sports leagues are still upset and tried to get a cut of the revenue through an ‘integrity fee.’ Thoughts?

DD: The marketing of this is key. You have to make sure you safeguard all the integrity of the program. So, we’re focused very much on integrity and making sure that we handle it properly. The last thing you want is to have some untoward result as a black shadow. But the leagues have their own problems. Right now, the leagues know it’s a $400 billion illegal industry; they would have you believe that, because it’s legal, they suddenly have more costs. I don’t think they are going to spend a dollar more preserving integrity in the legal market than they were before. But, there’s a lot of criticism, they get a lot of things wrong. We talk about, for example, the finals in basketball. The Cavaliers playing the Warriors — at the end of the game, there was a referee decision that made a difference in the game. People don’t have recourse on that … when the leagues come out the next day and say, ‘Our refs blew it,’ the public isn’t comfortable with that. What happens is, I’ve talked to our Las Vegas partners, they pay off the debts, then, when the leagues come out the next day saying they were wrong, you have some unhappy customers. You have to do something to make them happy — sometimes, they have to pay off those bets or comp them. I think the leagues need to do a better job.

ROI: Tell us about the weekend before the bill was signed. You didn’t pressure the governor the way your state representatives did. Why?

DD: My communications with the governor over the weekend were trying to be helpful. Lending my expertise. If he had any questions. I probably have more expertise than anyone else here, so I was trying to help him get through the process. He told me he got the bill Friday at 3 o’clock. He wanted to read it, which is reasonable. He wanted to have his counsel and the (attorney general) look at it, he wanted to get this right. He kept stressing this was important for New Jersey, and that he was as anxious as I was to get started. I made it clear to him that I wanted to have his back because, throughout the campaign, one of my favorite expressions from him was he’s got our back and he’ll do what’s right for New Jersey. And I believed him. So, I wanted to assure him that, despite all the others attacking him, if he needed me to say anything, do anything, support anything, I was on board. There was no pressure from me. I was patient. I waited seven years.