Home Lifestyle Immigrant is enjoying running restaurant, even if it’s not where she expected...
Facebook
Twitter
Linkedin 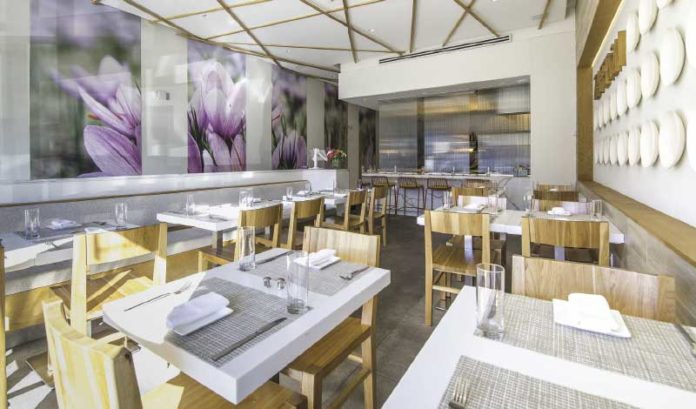 Soody Nelson emigrated from Iran to New York City to embark on a career in banking and finance that would span three decades.

Now, she is an unexpected restaurateur in New Jersey.

“Operating a restaurant is not something I ever imagined doing,” Nelson said.

Despite her upbringing and strong connection to Persian food and culture, Nelson’s move from Wall Street to Main Street was rather surprising — especially to her.

“I did not appreciate all that goes into the restaurant business,” she said. “I expected things to go as smoothly as they had in my prior career.

“But many things must work together perfectly for a restaurant to be a success.”

After more than one year in business, Zaferon Grill in Verona not only is thriving, but also is a step in the right direction for Nelson to integrate her old world with the new.

Nelson is one of seven children her parents sent abroad from Iran.

“They always had emphasized education and our exposure to other cultures and languages,” she said.

When Nelson was in her early 20s, she said, she traveled to the United States to pursue a Master of Business Administration in 1975, before beginning her work with companies such as Deutsche Bank and American International Group in 1978.

Then the Iranian Revolution began.

“My mother and my youngest sister, who was at the time just 14 years old, were the only members of my family left in Iran,” Nelson said. “But there were talks of closing borders and of girls being attacked.”

Luckily, her mother and sister were traveling in Europe as the uprising intensified — and Nelson took it upon herself to demand they not return.

“My mother’s family tree in Iran dates back over 700 years, but she was a very courageous woman,” she said. “She agreed to come stay with me in New York with just the suitcases they had packed for their holiday.”

Nelson said she helped take care of her family until they relocated to Texas.

“We all were working hard and doing whatever we could, including my mother, who had not worked since she was in her 20s and was then 58 years old,” she said. “She assimilated by cooking for restaurants, completing alterations, gardening — anything she could.”

Eventually, Nelson said, most of her family would settle in the U.S.

“Everybody did well and raised their families, but it was still very tough for a long time,” she said. “We were totally uprooted.

“The only photos we have from our old times in Iran were the ones we brought with us.”

Despite her family’s flight from Iran, Nelson built a lengthy career for herself in banking and finance before leaving the industry in 2009 as a managing director at Standard & Poor’s.

“I always had created financial products and managed one-of-a-kind transactions, but I was ready to switch when the recession hit,” Nelson said. “The industry had changed tremendously, and all the fun and creativity of my old job was no longer possible.”

It wasn’t until 2015 that Nelson’s previous life would catch up with her, she said, when an old acquaintance whom she had known since living in Iran approached her with the idea to start a restaurant group.

“I said, ‘OK, let me do some research and create a business plan,’” Nelson said. “I said, ‘If you operate the restaurants, and we serve healthy, organic food that is slightly upscale, I will be your business partner.’”

They selected Verona for their first restaurant’s location due to the proximity of her business partner’s residence.

“It is a very informal town with deep roots — and it absolutely was the right place for our concept,” Nelson said. “The town did not have many other restaurants except for casual Italian and pizza, but, because of the diverse population and food culture in nearby Montclair, people still gravitated toward the surrounding area — where rent is cheaper.”

Nelson said she also selected and designed a casual environment for the restaurant so as not to create hesitation amongst any potential diners.

“I had dined at many fine restaurants and holes in the walls all over the world,” she said. “I always felt that one should not have to be in a formal setting to enjoy a nice, healthy meal.”

Three months prior to opening, Nelson said, the restaurant was coming together nicely.

Then the news: Her business partner’s health was failing, and she would be expected to own and operate the restaurant alone.

“There was about to be a huge learning curve,” Nelson said. “But food that comes from the heart and soul always will be good through downturns and upturns.

“If you start with a good business model, food always will be viable.”

Zaferon Grill in Verona opened in February of last year.

It now employs nearly a dozen and seats 35, with tickets for two averaging $50.

“People have been phenomenally generous and supportive here in every way,” Nelson said. “Once they come in, even though they might think it is formal from outside, we generally take care of them by giving them fine food and service in a comfortable environment.

“They almost always come back.”

“My parents owned land with a chicken farm and a garden for our own consumption,” Nelson said. “I grew up eating fresh eggs and bread every day, so this concept is very much in line with my childhood.”

“I truly believe the Persian proverb that a healthy mind is in a healthy body,” she said.

The harmonious environment Nelson created at Zaferon Grill makes it easy for her to come to work every day, she said.

This despite her never having had any prior experience in the restaurant industry.

“My clients used to be the largest 250 banks and financial institutions around the world,” Nelson said. “But, in a restaurant, everything happens much more quickly, you get feedback whether you like it or not, and people come in with all sorts of expectations.

“Still, I have to say, by all accounts, we have been very successful.”

“I also would like to create some products that draw inspiration from my mother’s dishes, such as commercialized sauces,” she said. “That, I believe is my path.

“But first, we must digest this one.”

Soody Nelson, owner of Zaferon Grill in Verona, said she began working in banking and finance with an 18-month visa.

“After that, my company applied for me, which made it a lot easier for me to build a substantial life and career,” she said.

Others today cannot do the same, Nelson added, especially when it is easy enough to hide in a kitchen.

“Many people who work in the kitchen often come here for a job and the money, because they cannot find such security in their own country,” she said. “But I personally think that, rather than forcing employees to work undocumented in the shadows, we should keep providing them with extendable work visas.

“We need the workforce; they need the jobs; and, if they come here and work under visas, they still must pay taxes to contribute back to the country supporting them.”

The dream that America was built on, Nelson said, is otherwise in danger of fading.

“We simply are not as open to allowing people to come here legally or giving them as easy of pathways,” she said. “But, when someone comes in that is undocumented, they cannot assimilate. They cannot learn the language or get on with society as well.

“This not only can be very damaging to them in developing their full potential, but, also, a business thrives only when the people making things happen are happy to be a part of it.”

Soody Nelson, owner of Zaferon Grill in Verona, said she learned after more than 30 years in banking and finance and just one in the restaurant business that what energizes and encourages employees to come to work can vastly differ.

“There are no promotions or profit sharing, and bonuses are very rare,” she said. “Everyone also is operating on a daily schedule rather than thinking about the weeks ahead.”

Nelson said it is therefore important to her that her employees are as focused and thorough as they can be when working in her restaurant.

“So, first, I insist on everybody getting fed before their shift starts,” she said. “I also offer catastrophic health insurance and always have paid $11 minimum here, because I would feel very uncomfortable if someone worked for so many hours and still could not afford to live in this part of the country.”

Nelson said she also wants her employees to feel safe and is trying to learn more Spanish to be able to provide further guidance and mentorship.

“Many times, the wait staff and the people working in the kitchen are from Latin America,” she said. “And I really appreciate all of the hard and detailed work they do to run the restaurants.”

It is unfortunate, Nelson said, that some Americans do not take as much pride in that sort of work, particularly in this part of the country.

“To me, it is an honor that people want to work here and so, I want to treat them well,” she said. “I want my employees, no matter where they are from, to feel as if they are each given the opportunity to reach their full potential.”

Americans, Soody Nelson said, may think negatively of Iran because of the current political rhetoric between the two countries.

“But, if a stranger sees you in Iran and asks if you are American, you then will be asked if you have a place to stay,” she said. “If you do not, they will invite you to come to their home and they will give you the best they can afford.”

Food, especially, Nelson said, is a trademark of Iranian hospitality.

“In Persian culture, people don’t necessarily need to be invited to a meal,” she said. “They stop by your house and you invite them to eat.

“We regularly had friends and relatives dine with us, so, while our table always was set for 10 or more people, my mother cooked for twice that in anticipation of unexpected and welcomed guests. She would whip up a fast feast creatively and spontaneously.”