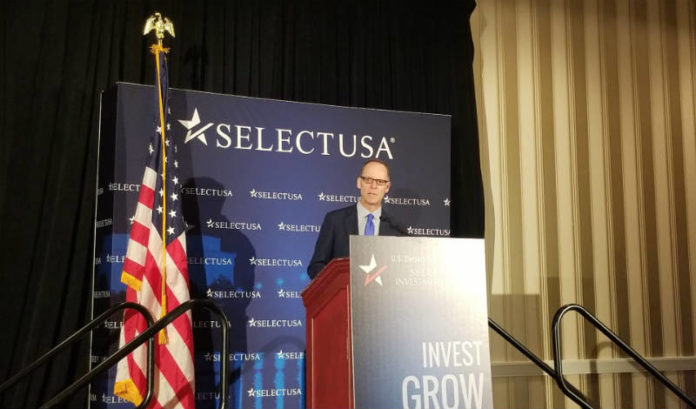 Utah is marketing its airport as an inland port — and calls its startup cluster as “Silicon Slopes.”

Wisconsin is bragging about its “Wisconsin Valley,” which exists between Chicago and Milwaukee.

And New York is bragging about its $16 billion in decreased taxes and its credit rating rising.

It’s pretty obvious when you walk the floor at the fifth annual SelectUSA Investment Summit this week in Washington, D.C., that New Jersey has plenty of competition.

In fact, the competition is getting so great that the National Governors Association is trying to help sort out the process.

With a focus on foreign direct investments, or FDI, into states becoming a key focus of governors around the country, the National Governors Association, which has partnered for a second year with SelectUSA at the summit, has launched a program focused on FDI.

NGA Global, the new program, creates a bridge between states’ economic development arms and NGA staff members, to facilitate relationships across the world between companies and world leaders.

The current federal climate is making global leaders and delegations uneasy about commitments. When asked about how states can smooth over some of these issues, Pattison said, essentially, governors’ hands are tied.

“At the state level, the governors are in charge just of their states, because its subnational. And they are very much welcoming and encouraging all legal investment, and they want to be cheerleaders for their states.”

That being said, Pattison said states that identify countries and regions with initiatives and goals that match the state’s are the most successful.

“That’s something that we can really enhance that a lot of states recognize is important right now,” he said. “Facilitating the right match … is really starting to work well in creating economic development.”

Read more from ROI-NJ on the summit: