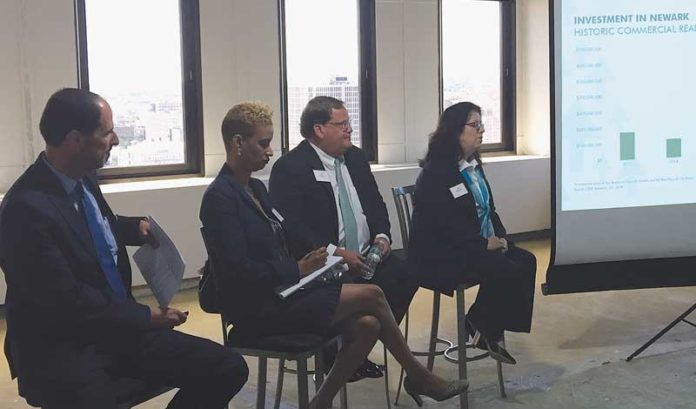 Newark developers and city officials love to talk about the explosion of real estate opportunities throughout the city.

And, while so many new properties are being built, officials at CBRE said companies would be remiss if they overlooked one of the city’s longstanding office landmarks: the four buildings that make up the Gateway Center.

Speaking earlier this week at a panel discussion sponsored by CBRE, “Rising, the Newark Office Market Story,” on the top floor of Gateway 2, CBRE officials said the buildings not only have some amenities few others can match, they are in the process of adding other amenities that could make the buildings regain their prominence.

“This is a building that was built 40 years ago, and it’s still ahead of its time,” Dudley Ryan, a senior vice president who has represented Gateway 2 for more than two decades.

“The building was a design built by and for AT&T as Western Electric’s Northeast Regional headquarters. It was designed by engineers, for engineers.”

Because of it, Ryan said the floors of the building were created with a duct system for power cables you will find in few places today.

And you get more power as a result, he said.

“We typically quote 6 watts per square foot, but we can easily do 8 watts or more as long as tenants justify the need. For many of our tenants in the building with mission-critical operations (including Broadridge Financial, which just moved in), part of the attractiveness of the building is that pre-built infrastructure for the density in today’s office needs.”

The building also has two other advantages.

Ryan said the dark fiber cable that gives Newark some of the fastest internet speeds in the world goes “right by our front door.” In addition, the building is on the same power grid as Public Service Enterprise Group, which has its headquarters next door.

Because of it, Ryan said the building recently received a Wiredscore of 99 (out of 100), making it the only building in the state to get a platinum ranking.

All this being said, the four buildings are decades old.

And, while the buildings have different owners and different leasing agents, they are often viewed as one entity.

An entity that is just beginning to get a much-needed facelift.

“There is an unbelievable opportunity for the new owners,” CBRE Senior Vice President Jeremy Neuer said. “And it will be amazingly creative for all four buildings. When you look at the trend in the market, which is Class A buildings providing over the top amenities and retail, that is not the way it is now. It is old, it’s tired.

Jeff Babikian, an executive vice president at CBRE, said the time is right.

For years, Babikian said, there was concern about the areas surrounding the buildings — making employees in the building not want to interact with the city.

Babikian said there were exhaustive studies regarding the experience, especially for women. Those concerns, he said, are no longer valid.

“(People are) now going out and saying, ‘What’s the problem here?’” he said. “You didn’t have that feeling five or six years ago. There’s the difference and, boy, Gateway needs it.”

“The workforce in Gateway has started to come out and make their way further up Market (Street) because there are more and more restaurants opening,” she said. “But as such a landmark in the downtown core, it’s an important investment to make.”

“It’s not just one or the other,” she said. “I think they can and they should be thinking about the façade … making it more exciting. This is the gateway to the city, it should look like it.”

Ryan noted the presence of an art museum in Gateway 2 as well as regular jazz events.

That experience, they all agreed, needs a fresh look.

“I think we just want to make sure that Gateway comes into the year 2018,” Glover joked.