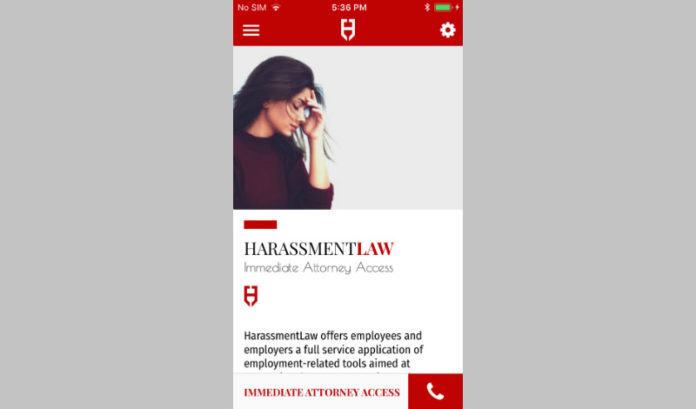 It was late at night when his client heard a knock at her hotel door, Marc Garbar, an attorney at Bertone Piccini in Hasbrouck Heights, said.

This is how many stories begin, he added.

After practicing employment law for 23 years, Garbar said the account of his client being inappropriately touched by her boss on a business trip — and the added support from the #MeToo and #TimesUp movements — finally compelled him to get involved one step further.

“I wondered, if and when potential victims are in situations like that, what should they do and where can they turn for help?” Garbar said. “There are many challenging situations in which employees, and yes, employers, may feel that they are damned if they do, damned if they don’t.

“After all, if employers are never properly educated on sexual harassment and discrimination, this will never end.”

Garber said he partnered with a family friend to develop HarassmentLaw, a mobile application available for free on the Apple App Store and Google Play, over the last year and a half.

“HarassmentLaw is designed to offer employees and business owners immediate attorney access and relevant, employment law-related information,” he said. “It is like having a virtual employment attorney in your pocket.”

Anyone, whether that be an employee with a complaint or an employer facing an allegation, can use the app to connect with Garber or a member of his legal team 24/7.

Garber suggests that employers, especially, use the application to learn how to prevent such issues altogether.

“Many small- to medium-size businesses often face these types of challenges, because they often do not have human resources departments,” he said. “And, if a verbal or written complaint is made, there is no handbook listing the next steps to take.”

“I think the reason why each of those industries have so many allegations is because of the significant gender disparity that exists between the people working as receptionists, nurses, waitresses and more, and their supervisors,” he said. “We need to address that issue, too.”

Grewal has tough words on price gouging — and businesses that...

Managing contracts in the time of the coronavirus pandemic