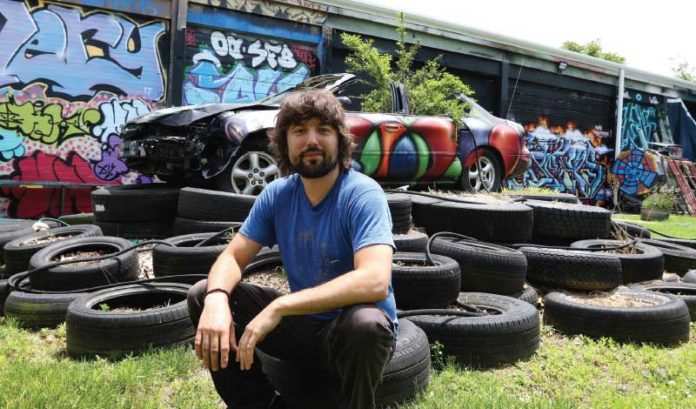 It’s in the most jarringly nonchalant tone that Tom Szaky will describe a plan to launch a new line of business for his Trenton-based company at the 2019 World Economic Forum in Davos, Switzerland.

What a change 15 years can make.

The CEO of TerraCycle went from shelving his studies as a Princeton University sophomore as he risked a startup with a college buddy to having casual conversations about solving the world’s problems.

Szaky has experienced a great deal since leaving Princeton in 2003. Chief among them is seeing TerraCycle win a recent United Nations climate change award, one of about 200 environmental and social awards it has received since its inception.

Along the way, his company grew its revenue consistently to the $35 million it’s at today. That growth gave way to a hiring spree that brought TerraCycle to around 250 employees. At the same time, the company made its first acquisition this year, purchasing a Chicago-based recycler of fluorescent bulbs.

That’s all the more impressive considering TerraCycle is an outlier in industry that’s in decline due to global trends in recycling, such as China halting imports of recycling materials.

“Recycling is doing very badly as an industry around the world,” Szaky said. “I think it’s a terrible thing for the world overall.”

TerraCycle has proven resilient because of its creative approach to the recycling industry. The waste it collects and finds new purposes for is generally considered not recyclable at all — a long list of disposable products that includes diapers, candy wrappers and cigarettes. The company has collected more than 5 billion pieces of this type of waste globally.

The lightning in a bottle success of TerraCycle can be explained in part by an increased consumer consciousness when it comes to environmental issues, especially among younger demographics. Szaky is heartened by that trend. And it has no doubt inspired many of the corporate partnerships that have brought the local company to international prominence.

One of those relationships is leading to the production of the world’s first recyclable shampoo bottle, made with plastic collected on beaches. The program, which the multinational Procter & Gamble Co. will be introducing through its Head & Shoulders brand, was announced at this year’s World Economic Forum.

Litter in the world’s waterways is being recognized as a problem in light of new reports that describe garbage patches larger than Mexico in the waters of the South Pacific. The United Nations has made a goal of addressing it. And at this month’s meeting of G7 nations, most of the world powers agreed to make plastic waste recyclable by 2030 to combat this pollution.

“What we’re doing at TerraCycle is running the largest supply chain for ocean plastics; it’s being collected from every continent in the world — from ocean, rivers, lakes and beaches — and processed into high-grade plastics that can be used in various products,” Szaky said. “I’m devastated with what’s happening with marine plastic. It’s a crisis, and what we’re doing isn’t the answer, just part of a solution. No one can do it on their own, it has to be a concerted effort.”

Rather than literally digging trash out of the sea, Szaky would prefer it didn’t end up in waterways to begin with. That’s why his company — after the previously alluded-to World Economic Forum unveiling next year — will be scaling up a program to move products and packaging from “disposable to durable,” as he described it.

Following its world-stage debut, the still somewhat mysterious initiative will go live in Paris and New York with the involvement of some big, although yet-unannounced brands.

“Some of the world’s biggest retailers and companies are going to be giving you the option of moving away from the concept of waste by introducing durable supply chains for all their products,” Szaky said.

TerraCycle is already being associated with a wider array of multinational companies all the time. Last year, it worked with Target on a unique baby car seat recycling program. This year, it announced new pilot programs with toy manufacturer Hasbro, automaker Subaru and other global corporations.

The company also is forming stronger ties with local governments across the globe, allowing it to play a significant part in collecting nonrecyclable waste — pens, coffee capsules and more — in more than 20 countries.

To make room at home for its expanding business operations abroad, TerraCycle recently bought two buildings surrounding its Trenton base. Together with its hip, street art-adorned headquarters, the buildings compose an early form of what Szaky calls a “TerraCycle campus.”

The company’s road to worldwide relevancy is promising for Trenton in a way that hasn’t been lost on its leaders. Look no further than the street its headquarters is on — Trenton’s mayor changed the name to TerraCycle Way.

Even with its growing global garbage dominion, TerraCycle isn’t throwing out plans to be part of the city’s revitalization.

“We want to do important things for our communities; I don’t think we could pick up and go to San Francisco and say we’re really fulfilling that,” Szaky said. “We want TerraCycle to be a company that stands for social and environmental good in everything it does. For us, it’s about leaving the world better place, ideally while also making money — and, in fact, in that order.”

TerraCycle’s Tom Szaky hasn’t communicated with Gov. Phil Murphy yet about New Jersey’s waste issues, but he expects that he will sometime soon.

He has, however, made a connection with Christie Whitman, a former Garden State governor and former EPA chief. She’s even helping co-author a book on waste elimination that Szaky has coming out at the end of the year. It’s called “Future of Packaging: From Linear to Circular.”

“She reached out to me after hearing about us and came down for a visit,” Szaky said. “One thing led to another, and now we worked on this book together. I’ve been glad to collaborate with her.”

Getting the call: How Orange entrepreneur landed his product on Walmart.com