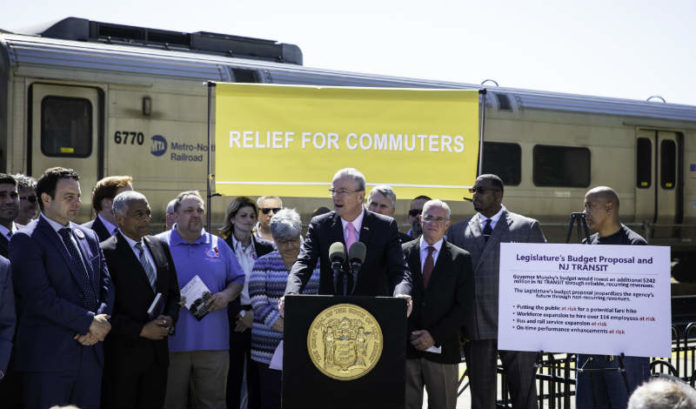 Gov. Phil Murphy, in the first sign of a potential compromise that could avoid a shutdown of the state government, sent a letter to the legislative leaders of both houses late Tuesday, suggesting a way modified versions of both the corporate business tax and millionaire’s tax could be implemented. (To read the letter, scroll down.)

The letter, addressed to Senate President Steve Sweeney (D-West Deptford), Assembly Speaker Craig Coughlin (D-Woodbridge) and both houses, asks for a modified but recurring corporate business tax hike, as well as a modest increase in the marginal tax rate on personal income in excess of $1 million, along with the two-year, phased-in restoration of the 7 percent sales tax rate.

The modified business tax hike comes with the caveat that it does not reach the 13 percent that legislators have proposed for companies earning more than $25 million in the state, which would give New Jersey the title of highest business tax in the country.

“This surcharge must be at a rate that does not make New Jersey an outlier nationally, as the bill that is on my desk currently would,” Murphy said in the letter.

Both tax increases have caused significant concern for the business community, since both, on their own, created a likelihood of top earners and high-revenue businesses leaving the state.

The millionaire’s tax, although popular based on recent polls, was also a problem because it jumped to more than 10 percent, according to Gary Bingel, a tax attorney with EisnerAmper.

Murphy’s proposed compromise may be more digestible. Murphy had proposed raising the tax on the highest earners from 8.97 percent to 10.75 percent.

The compromise would change how much revenue the state sees from both taxes. Previously, the Office of Legislative Services estimated the corporate business tax would provide $800 million, and the millionaire’s tax (according to a review prior to the federal tax reform) would net between $790 to $850 million.

The Office of Management and Budget estimates the corporate business tax, based on the original bill, to raise revenue in the $550 million range, while the millionaire’s tax is estimated to rake in $765 million.

Murphy also said in the letter he is prepared to accept compromises from the Legislature, including Sweeney’s school funding formula and Coughlin’s tax amnesty program and reinstatement of the homestead rebate.

To read Gov. Murphy’s letter, click on the image below.

FreeCOVIDTestsNJ.com: Why marketing leader bought this URL — and then redirected...

Quinnipiac poll: Booker still behind Biden in early 2020 poll of...