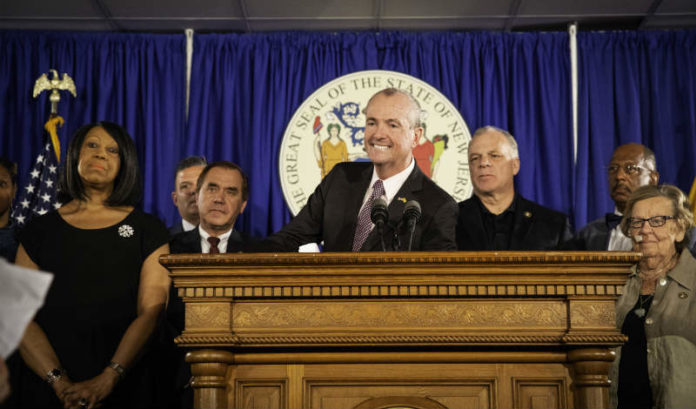 After another day of negotiating, state legislators voted Sunday night to pass the Fiscal Year 2019 budget, which was signed by Gov. Phil Murphy shortly before midnight.

A budget deal, which was agreed upon Saturday night, was slightly modified Sunday to include more specifics surrounding the combined reporting provision of the corporate business tax.

The millionaire’s tax, which applies to individuals earning more than $5 million, was included as an amendment in the earned income tax bill, sponsored by Assemblywoman Angelica Jimenez (D-West New York), which passed earlier Sunday.

On Saturday night, the governor and the legislative leaders announced an original deal, which outlined how a millionaire’s tax and corporate business tax would be implemented in the state.

There were concerns about the corporate business tax, specifically the technical details of how the tax would be collected. Legislators waited for the Office of Legislative Services to update the details of the regulations, which would redefine how both multistate and state-headquartered corporations would handle income reporting for all entities within the state.

One of the changes that was made was to exclude the “transaction between members of a combined group” as part of the entire net income, according to the bill.

“This subparagraph only applies to interest paid, accrued or incurred by a taxable member of a combined group to related parties that are not members of the combined group,” the bill said.

These are some of the specifics that tax experts said could determine how businesses would be affected.

Norman Lobins, a Deloitte multistate tax services professional, said part of the problem in estimating the revenue is that every business is structured differently.

“Every corporation files on its own and pays its New Jersey tax, and corporations that don’t have business in New Jersey, don’t, even if they’re part of the same corporate family,” he said. “I’m not sure how the state would have visibility to those entities that are not filing a return (in New Jersey).

“And then you’ve got to do a detailed calculation of those companies together — the ones that are filing and the ones that aren’t filing — and combine that information to come up with a new number and comparing that with what the companies have filed individually.

“It’s a big task. I’m not sure how they have that detail available.”

Lobins said that, even though some of the companies are filing under combined reporting in other states, each state has different nuances.

“You still have to look at it individually,” he said. “That includes, what companies are included, U.S. or foreign, how much is included, and what’s the apportionment, how do you handle intercompany transactions — any number of things can be different.”

The Legislature had details of what the governor was looking for on June 6, according to a source with knowledge of the negotiations, but who was unauthorized to speak publicly.

Many of those items were not included in the first draft Sunday morning and, by 10 a.m., the Legislature went back to the governor with some changes to the framework.

The result of the 10 a.m. approach was mixed. The governor agreed to some provisions, but blocked others that were too big to include at the last minute, according to the source.

Meanwhile, officials for the New Jersey Business & Industry Association and the New Jersey Chamber of Commerce were frustrated that a complex issue like combined reporting was being shoved through the Legislature in order to balance the budget.

“At some point, it became a bargaining chip,” Michele Siekerka, CEO and president of NJBIA, said.

And the business community had been lobbying hard against the inclusion of combined reporting from the beginning.

A combined reporting bill was first introduced by Senate Budget Committee Chairman Paul Sarlo (D-Wood-Ridge) at the start of the year, and Murphy referenced it in his inauguration. But, since then, things had been quiet.

Sarlo did publicly address it at one point, acknowledging his bill was imperfect, especially because it did not consider the effects of the federal tax reform, but saying that a “cleanup” version could be passed later.

As the June 30 deadline for a budget agreement loomed, it became clear a battle was building up that included both the millionaire’s tax and the corporate business tax in some form, paired with tax amnesty and a possible reinstatement of the 7 percent sales tax.

On June 6, the governor included combined reporting in the CBT bill.

But business and tax experts explained to legislative leaders why it was too complicated to craft in a short period of time.

Tom Bracken, CEO and president of the state chamber, said it’s hard to explain the issue in a few sentences.

Which is why the revenue estimate is likely to be extremely conservative, according to some experts.

“That’s why something like this shouldn’t be done in the 11th hour,” Siekerka said. “We’re forcing a process that isn’t the complete process to analyze this.”

Michael Egenton, vice president of the NJCC, said a thorough review was done and several technical changes were made — but there is still more to be done.

“We have got commitment from leadership that those technical changes can be discussed in a post-discussion,” he said. “This is the reason why we didn’t want a rush job to begin with. But I want to acknowledge that this was better than previous drafts.”