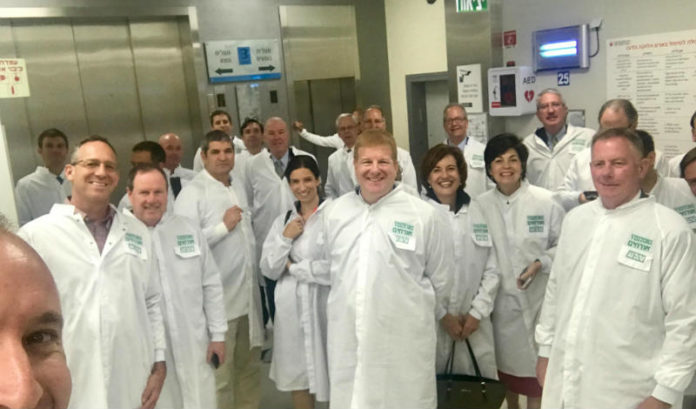 The move is expected to create 832 high-paying jobs in New Jersey while retaining the 232 existing jobs the company already has in the state.

“The presence of global life sciences companies like Teva Pharmaceuticals is critical to New Jersey’s ability to strengthen a thriving innovation ecosystem,” Murphy said in a statement.

“We are thrilled to expand our welcome to Teva, and its more than 1,000 employees, in the Garden State — the place to be for the world’s most competitive life sciences companies.”

Make no doubt about it, this is a big win for the Murphy administration — especially coming on the heels of the announced raise in the corporate business tax.

Not that the new tax will impact Teva right away.

The New Jersey Economic Development Authority approved performance-based tax credits for Teva through the Grow New Jersey program at its June 2018 board meeting.

Tim Sullivan, the CEO of the EDA, said Teva’s relocation is part of the state’s desire to create an innovative economy.

“Nurturing the growth of strategic industry clusters is central to Gov. Murphy’s mission of reclaiming New Jersey’s leadership in the innovation economy and strengthening the state’s economic competitiveness,” Sullivan said in a statement.

“Teva’s long-term commitment to New Jersey is the latest evidence of the enduring strength of our life sciences industry and New Jersey’s value proposition to the world’s leading companies.”

Currently headquartered in North Wales, Pennsylvania, Teva Pharmaceuticals sought to consolidate its operations into a more centralized location to drive efficiencies and maximize the advantage of being part of a thriving life sciences cluster, the company said in a release.

Teva, which will expand its existing Parsippany-Troy Hills location to nearly 350,000 square feet, expects to transfer and create 843 jobs and retain 232 existing positions. The median annual wage associated with the more than 1,000 positions is $128,073.

Brendan O’Grady, an executive vice president and head of North America commercial for Teva, said the move makes sense for a number of reasons.

“While Teva will retain a significant presence in Pennsylvania, reducing the number of sites supports our drive to continue to improve productivity and efficiencies,” he said.

“We’re pleased to expand our presence in New Jersey, having closer proximity to a vibrant business hub and a dynamic life sciences environment — all while increasing jobs and preserving many existing roles.”

The company has a global product portfolio of more than 1,800 molecules and a direct presence in 60 countries, including 30 locations across the U.S. and its territories.  As a manufacturer of specialty and generic pharmaceuticals, Teva said it provides both new and innovative therapies and works to make quality health care accessible.