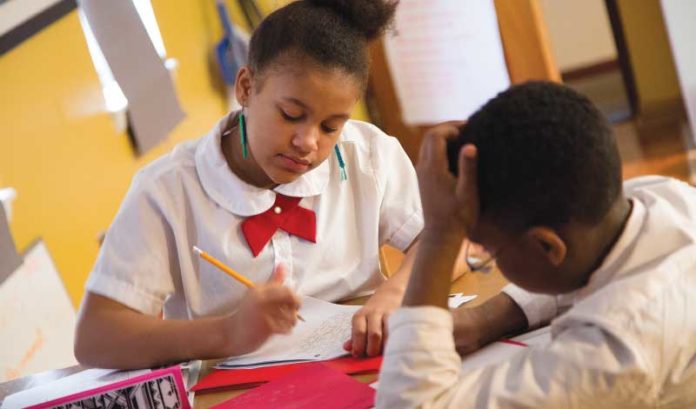 Founded by former journalist Tim Whitaker in 2009 on the premise that teaching kids to write is the most direct way to confront the literacy crisis in the Philadelphia area — and, now, Camden as well.

The mission of Mighty Writers’ Camden location will be to teach Camden kids ages 7 to 17 to think and write with clarity so they can achieve success at school, at work and in life.

Our goal has always been to reach as many kids as possible with the power of writing. In addition to opening a new program in Camden at the Nick Virgilio Writers House, we’ll also be looking to add our programs to two new Philadelphia rec centers in the coming year.

We teach kids to write through daily after-school writing academies; workshops, nights and weekends; and teen scholar writing classes. We also offer SAT Prep and college initiative programs for our high school populations. We are launching in Camden with several one-day summer writing workshops for neighborhood students. In September, when the school year begins, the Camden location will begin offering Mighty Writers’ signature Academy program and eventually launch evening and weekend classes, as well. Classes will be free, open to all students, and cover a wide variety of subjects. We will also be looking to offer bilingual classes for Camden’s large Spanish-speaking community.

In the past few months, we’ve begun bringing Mighty Writers into recreation centers for kids that can’t travel to one of our sites. We recently launched an early childhood writing program for 3-to-5-year-olds called Mighty Toddlers that was a hit in our communities right from the start. We’ve also announced plans for our first literacy festival (to take place the last weekend of September 2018). Called MightyFest2018, the festival is designed for writers of all ages from Philadelphia, Camden and beyond.

We raise money through grants from foundations, individual donations and corporate support. We have two major appeal seasons a year.

Over the last decade or so, writing has taken a back seat in schools, well behind math, science and standardized testing. We believe you can’t be much of a science or math whiz if you can’t articulate and summarize your findings clearly. When kids learn to think clearly and write with clarity, their self-esteem soars and future success looms into view. There is no greater tool for future success than the ability to write.

Accounting ROI-NJ Staff - February 7, 2023
Glenn Friedman; Lori Roth CEO; Global managing partner Prager Metis They have an office in the metaverse — and will help you get one there, too Paula FerreiraTim...

Kean University’s Farahi says 2020 will be his last year as...