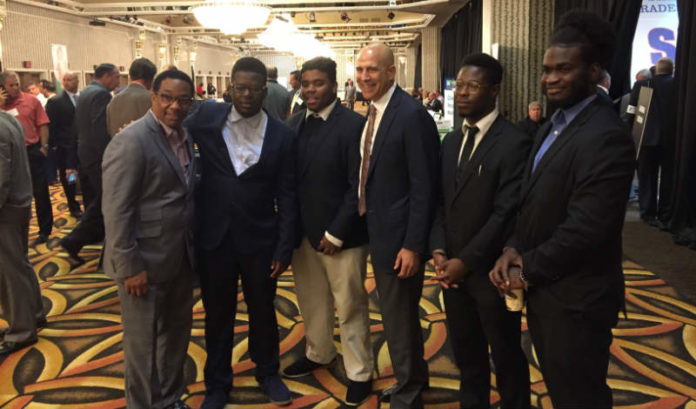 It would have been easy for Gov. Phil Murphy to recognize Joe Jingoli for his efforts in helping to build the Hard Rock Hotel & Casino Atlantic City as well as the Gateway Project, two efforts that anchor opposite ends of what Murphy is calling the “new spirit of Atlantic City.”

But, when he took the podium on the first day of the annual New Jersey State Building & Construction Trades Council convention Tuesday morning, Murphy did not praise Jingoli & Son Construction for what it built — but for how the company built it.

Jingoli, as is a staple on all of his projects, gave young local residents not only jobs, but the training necessary for a career.

“I want to give Joe and Jingoli & Son a shout-out for bringing the train-to-hire program to both this job site and the Gateway Project,” Murphy said. “Because of their commitment to onsite training and education, dozens of local residents now quite literally have tools for a new career in the building trades.

“It’s partnership and programs like this that will keep New Jersey a strong and proud union state.”

The effort illustrates one of the key workforce initiatives Murphy has laid out for his administration as the governor. He has continually preached his appreciation of the apprenticeship program he saw in Germany during his time there as U.S. ambassador.

Now, Murphy has found a way to act on the issue.

“Building trades have shown the way for effective apprenticeship programs, and now we will have the means to help expand on this model,” he said. “New Jersey was quite literally built by union hands. And we’re going to need more of them to help build the places where new businesses will take root and grow.

“It’s a future that our administration is going to be proud to be a part of.”

Murphy said the future is now for the construction industry and union workers in the state.

Murphy is looking to continue that wave.

“Our first order of business will be to make sure that we have the skilled workforce necessary to continue and propel this trend,” he said. “One of the key investments being made in our new state budget is our $34 million commitment to workforce development to train the next generation of union hands.

“And an integral part of this will be the creation of the New Jersey Apprenticeship Network, to reverse the decline in investment in apprenticeship programs that we saw over the last administration.”

Murphy detailed the apprenticeship program he is helping to build and improve.

“The New Jersey Apprenticeship Network is a $10 million, focused investment that will bring together multiple departments to coordinate not only on improving our current apprenticeship offerings, but also to create new initiatives,” he said. “What’s exciting is that this is not just a new investment, it’s also a reimagination of what we can do to make our current dollars do even more.

“(The network) will build upon the New Jersey Department of Labor and Workforce Development work through the past years in providing hundreds of thousands in state grants in the youth transitions to work programs to give high school juniors and seniors a jump-start in a career in the skilled trades and for the New Jersey Builders Utilization Initiative for Labor Diversity.”

N.J. unemployment remains stable, edges up to 3.5% as private sector...