Home Industry JCP&L head to customers: We heard you and we’re acting on what...
Facebook
Twitter
Linkedin 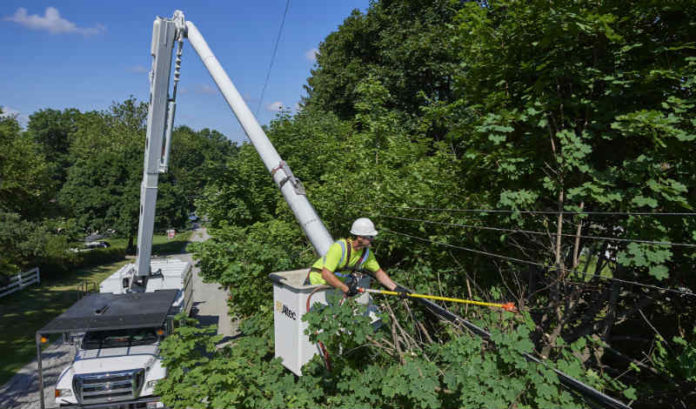 Jersey Central Power & Light President Jim Fakult said the company was planning to file a request with the Board of Public Utilities for an infrastructure plan even before it was called out during the damaging storms that hit the state in March.

The episode, he said, just made JCP&L bring more focus to its plans.

Fakult made that point clear in discussing the $387 million Reliability Plus plan the company filed with the BPU on Friday.

“In the aftermath of the storms, we went to a lot of public hearings and got a lot of feedback from our customers and committee leaders and elected officials,” he told ROI-NJ.

The Reliability Plus plan targets investments above and beyond its regular annual investments to enhance JCP&L’s service reliability and resiliency, Fakult said.

All of the improvements, he said, are geared toward power distribution.

“People have said that’s where the most value is and that’s where we’re investing the money: 100 percent in distribution,” Fakult said.

For JCP&L, that means a lot of trimming trees.

“By far, the largest cause of outages from the March storms and the May storms were trees,” Fakult said. “Better than 25 percent of this investment is going to be in additional, aggressive removal of danger trees and trees that can affect our system.

“Bottom line is, removing the cause of outages is really our priority. We think it’s one of the top values we can (provide) for our customers and that really got driven home from the March storms.”

Trees, Fakult said, historically are the biggest problem for utilities. They are even more so in New Jersey right now.

“People are better understanding the dynamics of tree damage,” he said. “In a lot of cases, what we’re going after its wider more aggressive clearing around our lines. We’re also going to target ash trees, particularly in North Jersey.

“The state is somewhat under attack from emerald ash borers. Some ash trees are weakening and dying, so we want to remove the ones along our line while we’re still able to.”

Fakult said the plan is about more than just trimming back trees; it also includes technology upgrades that will help JCP&L better handle the situation when a tree takes out a line.

“Embedded in this program is also significant investment in new technology that will prevent outages even when a tree does affect a line, because it will allow for rerouting of power — we call them circuit ties,” he said. “There’s also some new fuse protectors that we’re installing.

“We understand we’re not going to be able to remove every tree and every branch, so there’s a good investment in technology and other utility hardware that also will dramatically improve reliability. Tree removal is the biggest component and the biggest cost, but, to me, it’s still a balanced approach. This is focused entirely on our distribution system, not our transmission system.”

Fakult feels the increased interaction with the public has helped increase the awareness of how harmful trees can be.

“Damage, diseased trees do a lot of damage,” he said. “Given the chance to explain to our customers while we’re doing it, we think they’ll understand it and support it. To do nothing is not an option. We’ve got to make these investments, and we think our customers will appreciate it, especially for a minimum investment.”

An investment is a nice way to say there will be a fee to customers. Upgrades are not free.

The plan calls for an approximate 25-cent increase to consumer bills every six months over the four-year period of the plan. When it’s finished, it will be an increase of $1.89, Fakult said.

JCP&L said it expects the plan’s economic benefit to customers and businesses from enhanced reliability and resiliency will be $1.9 billion over the estimated life of the equipment installed through the program.

Fakult is hopeful the BPU will approve the plan. He feels it’s good for the state.

“After … analyzing our distribution system and performance and taking a lot of the lessons learned from the storms, we put together what I think is a very good program,” he said.

“The board approved at the end of last year a mechanism to allow utilities to invest and recover these investments. We want to continue to work and build and add on the work we’ve already done in improving the reliability of our system.”

Here’s a list of key contents of the JCP&L Reliability Plus plan, according to the company: