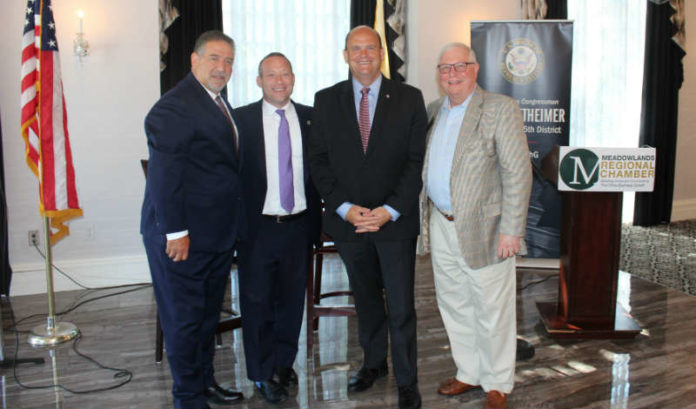 Most Democrats are dreaming of a Blue Wave.

The Problem Solvers Caucus has a different dream: a Purple Wave.

U.S. Rep. Josh Gottheimer (D-5th Dist.) is lobbying along with Rep. Tom Reed (R-N.Y.) for more moderate candidates to win in 2018. The co-chairs of the caucus made their case at a recent Meadowlands Regional Chamber of Commerce event.

“I get punished by my leadership all the time; they don’t like when we cross the aisle,” Gottheimer said. “But there is a growing number of us who are showing up there and saying, ‘We’ve got to govern again.’

“That means, we are going to get beaten up a little bit by our respective parties. That’s fine. I don’t work for the national party. I work for here, the 5th District.”

The two congressmen lead the 48-member caucus, which is split evenly between the two parties. It works closely with the advocacy group No Labels, and is pushing for greater focus on the centrist “silent majority.”

In a climate where corporate interests and business influence in politics are coming under scrutiny, the duo are convinced they have the solution — and welcome business support.

The caucus, which formed in 2017, has been pushing a centrist agenda — including bipartisan solutions to problems, as well as reforming the rules to allow more bills to get to the floor.

“We don’t need everybody,” Gottheimer said. “We are working on our caucus changing the rules so we can actually bring more things to the floor and have more debates.

Gottheimer said there is more common ground than people realize, but it takes work and political courage to grow the support.

Reed said there are members who are afraid to join the caucus because they might lose their next election.

“But, when you’ve got folks that are putting $50 million on the table, to say, ‘We’ll stand with you and watch your back,’ that gives them a tremendous amount of political courage,” Reed said. “We’ve had some major stakeholders, people that influence the agenda, that are standing up and saying, ‘Enough is enough,’ and they are not just going to talk the talk, they are pulling out their pocketbooks, they’re pulling out their resources and they are saying, ‘We are going to stand with you.’”

But, as the progressive left wing is growing, as seen in New Jersey, there is a push against taking money from traditional, corporate donors.

Just this year, U.S. Sen. Cory Booker (D-N.J.) announced his rejection of corporate donors, and Alexandria Ocasio-Cortez, who unseated an incumbent in her House primary in New York, won on the same platform.

Gottheimer views that as too far left.

“We are facing a moment where the extremes on both sides are the loudest. The silent middle, even though they are still the largest bloc, that’s not what gets heard the most. That’s not what breaks through … because it makes better news.

“The fight is always more exciting. I know it’s less exciting television, I got it, but actually … about what we need to do as a country moving forward. In the business community, you do this every day. You actually have to work things out. If you just went to the office and screamed at the person across the table and walked out … you’re not going to hold your job too long. You actually solve problems. So, tell your elected officials you want (them) to work with the other side.”

Jim Kirkos, CEO and president of the Meadowlands chamber, said that is why he invited the two congressmen to the event.

“That’s what people want, that’s what our members tell us,” he said. “Everyone is really tired of the fight. We are tired of the bickering. Something needs to get done. Let’s promote this, let’s do more of it and maybe we can get more candidates and more elected more officials that are willing to not be so extreme and do that.

“I thought it was important for our members because, though we are not a political-endorsing entity, there’s a place for organizations like ours to make statements that it’s really important to us.”

Fulop on Stack’s loss to DeGise in fight to become Hudson...