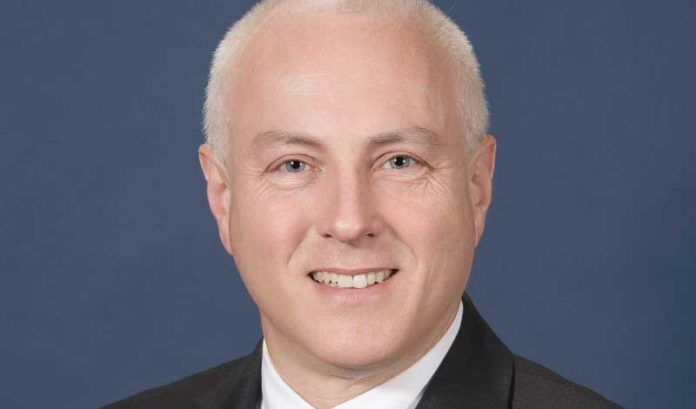 Stephen Welby, the new executive director at the Institute of Electrical and Electronic Engineers in Piscataway, will be the keynote speaker at the New Jersey Tech Council’s annual meeting this Wednesday in New Brunswick.

He recently chatted with ROI-NJ on what he will discuss that night — and about the ways he’s helped advance technology and help the country.

ROI-NJ: Your career has been fascinating. The IEEE is a group that bills itself as the world’s largest technical professional organization for the advancement of technology. So, there’s that. And you previously worked in President Barack Obama’s administration for eight years as an assistant secretary of defense (essentially serving as the top engineer on projects most people can’t dream of), you have worked with Silicon Valley startups and those venturing into sci-fi areas such as lasers and robotics and artificial intelligence. It sounds like quite a journey.

Stephen Welby: I’ve been very lucky over the years to be in the company of very smart people doing very cool things.

ROI: On Wednesday, you’re the keynote speaker at the New Jersey Tech Council’s annual meeting in New Brunswick. What can we expect in your presentation?

SW: One of the themes I want to talk about is how almost all the major problems in the world looking forward, be it energy, food, caring for an aging population, security, aging infrastructure, are all both challenges and opportunities for smart folks and companies to help not only change the world, but change the world for the better. And all of them are, fundamentally, in my mind, engineering problems.

All these things are going to require technical solutions. And it seems as though the world is strangely arranging the way to challenge our technical capacity?

I was going to talk a little bit about this belief, just introduce it to folks, because I think that’s part of the solution.

ROI: How specific can you get with so many issues to discuss?

I think there’s opportunities to think about the challenge of addressing privacy and trust in an era of data and how data is the most valuable resource available to us. And then, finally, maybe talk a little bit about artificial intelligence and how the virtual capabilities in those areas are challenging our ideas about ethics.

ROI: Let’s talk about this idea from a perspective of all of these challenges which are opportunities. Is this an issue that private industry needs to solve, is this a public problem or a combination? And are we getting enough government funding or private companies saying, ‘Hey, here’s where I can step in and solve that,’ as far as finding the solution. Where does all of that need to come from?

SW: I think the answer is, ‘All of the above.’ I think there’s opportunities here for entrepreneurs to make smart investments, to be rewarded for taking risks and probably make the world a better place. I think there’s challenges here in government policy in helping to encourage innovation. I think there’s a challenge here in terms of interaction between governments and government policy. How do we open the world and address a free flow of ideas and free flow of opportunity? That’s something that doesn’t seem very popular in current politics, but I think it’s a big picture kind of question. I don’t think it’s a question about government or private industry. It’s about how do we catalyze change.

ROI: Let’s take it from another angle: The United States versus the world. Are we leading in this research and effort to change? Are we trailing? Are we where we are we supposed to be? Or are other nations somehow moving ahead in a better way. Where does the U.S. rank?

SW: I’ve got great confidence in the people in this country and the people of New Jersey. I think if one looks at what the gross domestic expenditure is on research and development, the U.S. numbers are still the biggest, when we look at both private and public investment. But we’re seeing powerhouses like China, Japan, South Korea and India increasingly driving R&D investment.

I think the United States has to recognize that it’s not a given that the U.S. will be the leader in technology. It’s a competition, and it’s a competition that has to be fought every day. It’s got to be in our educational policies. We’ve got to make sure the best and brightest students are thinking about careers in science technology. It’s got to be in policy that supports entrepreneurship and returns for those who take risks. And it’s got to be a competition of ideas that’s not about closing doors, but getting into the fight, competing and may the best idea win.

I think that’s the playing field on which were competing. We established a U.S. predominance in the postwar era and I think we’ve been resting on our laurels a little bit over the last few years. I think we’re going to have to tighten our belts and get out there and compete again.

ROI: Let’s turn more specifically to IEEE in New Jersey. You took over as executive director within the last year. Why were you interested in the role — and what influence can you have in it?

SW: I was in the Obama administration for eight years and left on Inauguration Day with the change of administration. I took a few months off and was doing a little bit of consulting and was talking to a few folks about taking a kind of more traditional executive role in a large corporation. When the IEEE search committee approached me and asked if I talked to the board about the role that they were looking for, it became a compelling opportunity. Certainly, the stock options at a not-for-profit are nonexistent, but I think the mission is enormously important. In the first six months of doing this, I’ve been able to travel the world and talk to young people in Asia, in South America and all over the United States and Canada, about technology about education — about how they can contribute as technical leaders in their communities.

Generally, the role has enormous potential to help shape our future as the world’s largest technical professional society. It’s a kind of a secret that’s hidden and tucked away. We’re just up the road from New Brunswick in Piscataway, with a global operation center headquartered in Manhattan. We have offices in New Jersey and (Washington) D.C., California, Singapore, Beijing, Bangalore, India and Austria. I know I’m missing some, but it’s a global footprint. We have 417,000 members representing almost every field of engineering, computer science, lawyers, doctors, etc. I’m working on the forefront of the technology that’s going to shape our future. I believe it has a long and glorious history dating back to Graham Bell and Edison — some Jersey history — and really has the opportunity to shape the future in an important way.

That’s why I was excited when I was offered a position, excited to come on board to help think about its future. How could it increase its impact? How could it help support technical professionals around the world who want to create change? How can it help shape the future of the profession and our professional fields? And I’ve been very excited to be with the dedicated volunteers across the world.

ROI: So, let’s backtrack. You mentioned eight years of the Obama administration. Eight years in any administration is double what most people do. So, it sounds like you were engaged and liked the work. Talk about what you accomplished and how rewarding it must have been if you were there for that long?

SW: It was 2009 and I was living in Tucson, Arizona. I flew back to Washington and was surprised when I was offered the job as a deputy assistant secretary of defense, to be effectively the chief engineer of the Department of Defense. I was the first person to serve in that role. It was newly created and an opportunity to look across the entire portfolio of work the department does, from fighter aircrafts, space systems to medical systems to advanced communications to microelectronics, you name it. The department has an enormous clinical program and I was effectively responsible for execution of the development aspects of that program. All the technical review of all of those programs.

We had a great team at the Pentagon that supported 96,000 engineers spread across the country. It was a great opportunity to kind of shape the department. I think we really succeeded over a few years of helping to change the cost curve on nature programs and increase the likelihood of success, to be able to take some challenge programs and turn them around, to make some tough calls on programs that probably weren’t going to succeed. And then, in 2015, I was asked if I would consider the role of assistant secretary of defense, the chief technology officer in the department. I was nominated by President Obama and confirmed by the Senate and served the last two years’ administration as the chief technology officer of the department and ran a $12.5 billion research budget.

I got to work on a set of challenges both in support of our troops and solving global problems, as well as creating new opportunities with allies and partners. I think the thing I was most excited about during that timeframe is the effort that we put together to try and reach outside the Pentagon and engage nontraditional industries, particularly startups and small businesses, to try and get more innovation into the department. We launched an office in Silicon Valley to engage the entrepreneurial spirit of folks who would normally not think of government or the Defense Department as potential customers. We took off our coats and ties, put on our hoodies and went to visit a different crowd.

ROI: Dress code aside, that must have been interesting. We’re guessing most entrepreneurs don’t head to Silicon Valley with hopes of working with the Department of Defense. How did that go?

SW: We got a lot of young people to take some time off what they were doing and think about our problems as well. I think there’s been some success stories of companies that found kind of adjacent markets and the fence that have aided their original business ventures in interesting ways. I know that it’s a complicated topic, and we’ve seen the recent news about Google and how their AI program has gotten some pushback from that community. I think we need to to be looking at our best and brightest entrepreneurs and our best and brightest technology and ask, how can they contribute to the safety of the citizens of this country? And I think we did a lot of things to try and reduce the complexity of bureaucracy involved in working with the department.

I was pretty excited by that work. We really drove a spirit of innovation into the department. I’m happy to see that it continues after I’ve left and that there remains a drumbeat of a need to continually innovate. The willingness to think about how we compete in the technological realm has really a grown some roots.