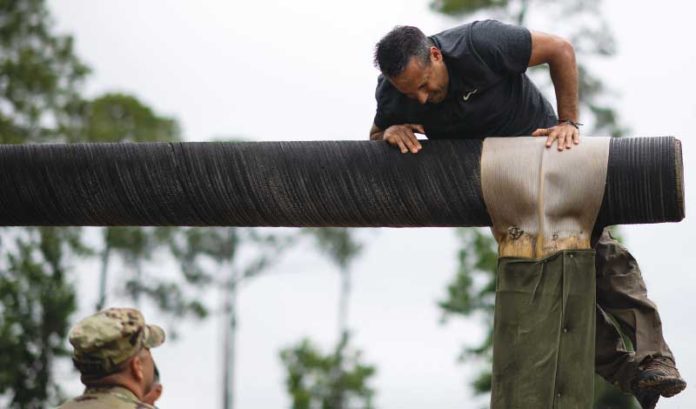 As he tried to keep pace with the drumbeat of drill instructor shouts, John Harmon Sr. thumped down from high obstacle course walls … and reached a new low.

It occurred then to the 58-year-old business leader that the life of Marine Corps recruits at boot camp may not be right for him.

“Pride might’ve gotten the best of me,” he admitted. “My mind was telling me one thing, but my body was really starting to tell me another. It’s not easy, take it from me. I probably could’ve opted out.”

Harmon was there sweating — alongside doctors, lawyers and other businesspeople maybe equally past their athletic prime — in military scenarios that were only simulations. But the experience as a whole was something that the CEO and president of the African American Chamber of Commerce of New Jersey thinks nobody should opt out of.

It was part of this year’s Joint Civilian Orientation Conference, or JCOC, a program that few know of — despite it being the oldest civilian outreach initiative of the U.S. Department of Defense.

It’s prestigious, as well. It recruits influential private-sector leaders as well as big names from public agencies and the nonprofit world. They learn about different branches of the military, not just through tactical exercises, but by talking with service members and officials in the country’s armed services.

Harmon and the other 35 participants in this year’s program even got briefings from some of the military’s top brass, including Secretary of Defense James Mattis. A question-and-answer session with Mattis at the Pentagon was the introduction the industry leaders got to the weeklong program back in June.

Michael Cherenson, executive vice president at SCG Advertising + Public Relations in Parsippany, was part of that cohort, one of those selected through a scoring panel process that narrows down an exclusive group from a pool of around 200 nominations.

“I shared my journey with top-notch civilian leaders from both the public and private sectors — a veritable ‘who’s who’ of those heading some of our nation’s largest, best-known or impactful organizations,” Cherenson said.

The program brings in these sector leaders and executives to better educate them about what the military does, who does it and, importantly, how the military’s resources are being used, said Col. Paul Haverstick, director of Office of the Secretary of Defense outreach.

“With a budget of $700 billion, the Department of Defense is one of the largest economies on the planet,” Haverstick said. “People like to know where that money goes, especially businesspeople. And they have an understanding, because they have large budgets, too.”

At the same time, the group’s immersion in military life is hoped to give participants — who, as a rule, don’t have enlisted backgrounds — a better grip on the role of armed services in society.

Certainly, the program’s purpose wasn’t lost on this year’s band of local participants.

“Less than 1 percent of U.S. population serves in the military, and even those who do are often part of a military family,” Cherenson said. “So, there’s growing divide between the worlds of the military and civilian population.”

The JCOC program’s approach to bridging that gap involves thrusting people into some tense situations at several different military installations.

On one stop at Fort Bragg, North Carolina, participants took part in a mock hostage situation demonstrated by a special operations division of the Army. The episode concluded with the group being ushered to safety on Chinook helicopters.

“It really was a whirlwind tour,” Cherenson said. “As much as I was amazed by the might and the power of our military, it was the people that most impressed me. All these men and women who are professionals from all walks of life. They’re truly are proud of what they’ve done, and they’re open to talking about the trials and tribulations of serving.”

And some of the most impressive service members they interacted with along the way were very young, Cherenson added.

“Here are some of the country’s most powerful CEOs, learning from some 22-year-old who is commanding 25 people,” he said. “But no one thought to question it. We all went in with a willingness to absorb as much as possible. And we were all so engrossed in the experience.”

Harmon, aside from the firsthand appreciation he got for the physical fitness of the military’s men and women, noted that it was instructive to observe the leadership qualities of these millennials in action, given the plethora of commentary in the business community about the work ethic (or lack thereof) of this demographic.

He feels like he’s been armed with a new view on the potential of millennials.

“To see the young people in all branches of the military that are given a high level of responsibility in managing and navigating assets of the U.S. government — assets with several zeros behind them — well, that gave me a different perspective,” Harmon said. “I was inspired by the level of trust they demonstrate, as well as the readiness to get the job done.”

“I saw for myself characteristics that any employer would love to have in an employee: professionalism, discipline and amazing organizational skills,” Harmon said. “That’s a big takeaway for any business leader.”

Everyone took away from the experience something a little different. For Cherenson — coming from the public relations background — there was a lot of inspiration to be found in the talk about strategy the military uses to establish connections with communities.

Like the military’s outreach department hoped, the regional executives who attended the program this year are already talking about spreading the word.

“This opportunity has exposed me to a whole other network of people that I hope to stay in touch with,” Harmon said. “I’ve spoken with them a few times since. But I really want to sit down with this influential cohort to figure out how we can use this experience to do some great things in our community together.”

There’s a great deal that 99 percent of us can learn from the less than 1 percent of all Americans currently serving in the military (of note, 70 percent of eligible Americans cannot serve, due to poor health/fitness, addiction, a criminal record or related issues). Here are several key items: