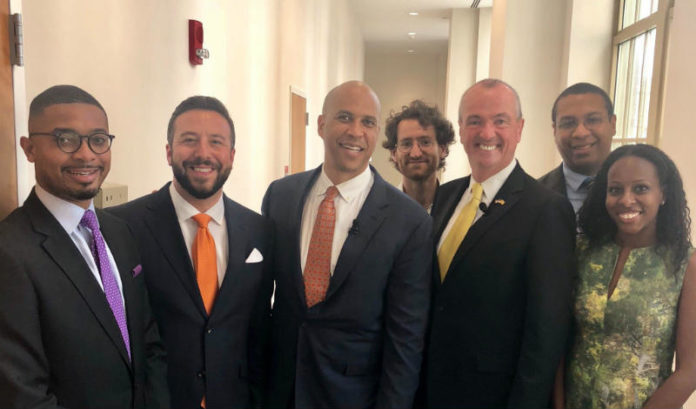 As the U.S. Treasury irons out rules and regulations for Opportunity Zones, U.S. Sen. Cory Booker and Gov. Phil Murphy joined forces Monday to tout their potential to the business community in New Jersey.

The event, hosted by Choose New Jersey, highlighted the potential of 75 areas in the state (spread among all 21 counties) they are eligible and could soon benefit from the investment program, which was passed as part of the federal tax reform bill in December.

“Innovative new tools like the Opportunity Zone program are the catalysts New Jersey needs to bring new investment to our communities in need,” Jose Lozano, CEO and president of Choose New Jersey, said. “Today’s forum is a significant step in bringing government, business and community leaders together to share their vision on moving New Jersey forward.”

Booker (D-N.J.), one of the sponsors of the bill, along with Sen. Tim Scott (R-S.C.), referenced the efforts by both Newark Mayor Ras Baraka and Murphy, saying the two understood what it takes to grow the economy.

“We wanted to get investments in areas that were struggling at a certain level,” Booker said. “(The governor) really went down and picked areas … that were going to help do what I think is part of your bigger plan, governor, which is — you understood the same things Mayor Baraka understands — which is that you’ve got to grow your tax base.”

And by numbers that are hard to believe, Booker said. When people understand they can reinvest their gains — with the potential to not pay tax on them — Booker said the money will pour in.

“The capital you’re going to attract to the state of New Jersey will not be measured … in the billions of dollars,” he said. “There are literally trillions of dollars being held by people who have capital gains obligations.

“A significant amount of it is in households in America. People have stocks. If they sold those stocks, they’d be hit with capital gains tax. Corporations as well, there’s about $6.1 trillion between individuals and corporations. “

Rather than getting hit with the tax, these entities and individuals can get a tax break if they invest in designated Opportunity Zones instead.

Doing so, Booker said, will help areas that still haven’t recovered from the economic downturn.

“We are a nation seeing all this recovery, but it’s not a geographically equally-distributed recovery. Genius in this country is equally distributed. There are as many geniuses in Camden as there are in the San Francisco Bay Area.”

“This isn’t a rat hole idea picked from the far right or far left. This is simple business economics of us understanding what governs the investment psychology of people in this country.”

Murphy agreed, adding that the zones are a game-changer.

When asked if the government should be playing such an active role in economic development at the local level, Booker retorted that government has, in fact, always played a role.

“We can’t sit here in Newark and be historical about the role of government in destroying New Jersey’s cities,” he said.

Booker cited the history of the Federal Housing Administration redlining loans, which manipulated the system to disenfranchise certain communities and undermine economic development, he said. New Jersey is now the fifth-most-segregated state for African-Americans in the country, and fourth-most-segregated for Latinos.

“That was by governmental design and the legacies of bigotry that have touched every element of policies,” Booker said. “We have got to understand that the idea of a free market is a little bit ludicrous. We don’t want a free market; we’ve seen what can happen when corporations can do whatever they want.”

“NJBIA thanks Choose New Jersey, Gov. Murphy and Sen. Booker for today’s informative discussion. While the success of the Opportunity Zone program may ultimately depend on private investment commitment in each community, we feel strongly it can be an effective economic development tool that will help small businesses grow and create private-sector jobs in some of the state’s most economically challenged cities.

“NJBIA feels this program can be a great opportunity for public-private partnerships and an effective part of a comprehensive economic development strategy.”