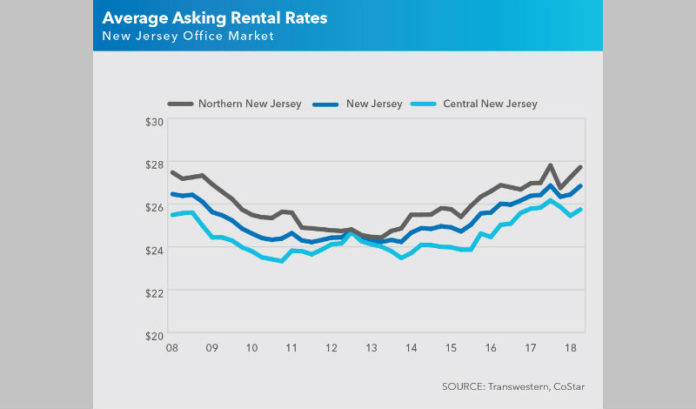 The report suggested the rebound comes from strong quarterly and year-over-year rent increases in Newark, the Parsippany submarket and the Union/Parkway corridor.

The market experienced more than 500,000 square feet of positive absorption, while the vacancy rate improved slightly from 15.3 to 15 percent, the report said. In 13 of New Jersey’s 21 submarkets, positive net absorption occurred this quarter, with rents rising in 17 of them. In Newark, asking rents exceeded $30 per-square-foot. This is the second time since 2001 rents in Newark were this high.

“As expected, deals that were in the market during the second half of 2017 have finally come to fruition, and the New Jersey office market is poised to improve further as tenants that recently signed new leases take occupancy,” said Matthew McDonough, Transwestern managing director. “Office landlords that are investing capital to create vibrant environments are being rewarded with increased activity, which has led to the influx of higher asking rents.”

Large transactions in the second quarter helped the market recover, the report said. Leases from Integra Life Sciences, Ralph Lauren and Mars Wrigley helped spur the quarter, while Plymouth Rock will soon move into a location once its modernization is complete.

The market also showed diversity, as companies from various industries signed large office leases. Also, companies are looking for spaces with expansion options, which the report suggests is an indication of a growing economy.

“As the economy continues to grow, many developers remain hopeful that millennials will return to the suburbs, even if it is at a later age than that of past generations,” said Transwestern’s Matthew Dolly, New Jersey research director. “Grow New Jersey incentives are creating opportunities for the redevelopment and transformation of aging office product, which is having a profound effect on the state of the market, as evidenced by the large deals that were completed during the second quarter.”