Home Lifestyle Teaching the Hispanic community how to network and grow a business, one...
Facebook
Twitter
Linkedin 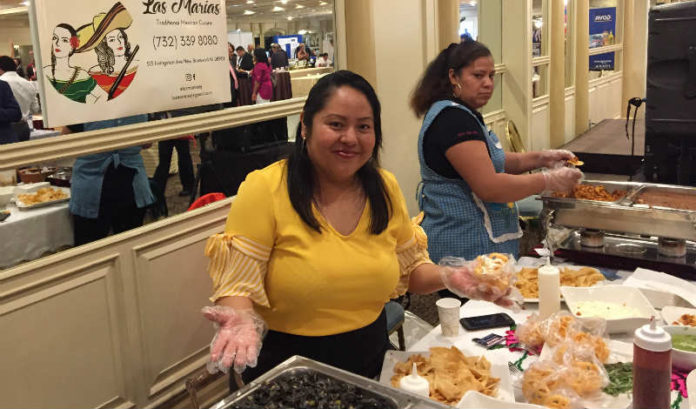 Maria Nieves looks up from behind the table where she is serving samples from Las Marias, her Mexican restaurant in New Brunswick.

Many people in the room felt the same way. Meet the new-age “angel investor.”

De La Hoz was making the rounds at the 2018 Hispanic Business Expo at the Pines Manor in Edison.

Tuesday night, torrential downpours — as exhibitors were just starting to arrive — didn’t hurt attendance. More than 1,000 people came to meet Hispanic businesses as well as enjoy the culture of the community, as plenty of food, music and dancing was available throughout.

De La Hoz, a member of both chambers, said the event is a key moment for Hispanic entrepreneurs because it teaches them something he said is missing in their culture: networking.

“Networking is something we don’t practice in Latin America,” he said. “In the U.S., everyone will say, ‘networking, networking,’ but no one will tell you how to do it.

“The idea is for people to come to this expo and learn how to develop relationships in order for them to do business in the future. The majority of tables are not selling anything. They are just building their base — and building the confidence in how they can market products to a general market.

“Networking has three steps: Visibility, credibility and profitability. Our community needs to learn that.”

De La Hoz, the vice chair of the board of directors at the Hispanic chamber, is working with Carlos Medina, the head of the group, to change that.

Many of the booths were manned by graduates of the Hispanic chamber’s 15-week entrepreneurship training program.

“We used to try to help everybody; right now, we are focusing on the ones who have high-growth potential, because we cannot accelerate everybody,” De La Hoz said.

And they are bringing in all the help they can.

The two keynote speakers: Google specialist Ricardo Martinez of the Braven Agency and Tayde Aburto, the CEO of the national Hispanic Chamber of E-Commerce came from out of state to talk to the exhibitors about marketing through the internet. More specifically, marketing to the right people.

But it was here that De La Hoz made another note.

He and Medina are teaching entrepreneurs that they need to reach outside of their communities if they want to truly grow.

“Our goal is to help them reach a broader audience,” he said. “Las Marias was the first Mexican restaurant in New Brunswick that focused on the general market. They don’t market to the Hispanic or Mexican community.”

It’s not as easy it seems, De La Hoz said.

“We have to teach them: It’s not about going back to your roots, but opening up your mind,” he said. “What we do is teach them how to offer products to the general market. The price is different, the presentation is different, they restaurant needs to look different.”

Nieves is a believer.

“I do everything he tells me,” she said. “He has helped me from the time I started to now. He helps me with everything I need.”

And he’s helping others, too.

He points to other Hispanic companies at the event, including Senor Sangria, which just landed a $650,000 loan to expand, he said.

De La Hoz feels the entrepreneurs he had practicing their networking skills will be able to do the same down the road.

He is helping to make those connections, too, inviting financial institutions to the event.

“The majority of the financial institutions that are here, are here because they have an interest in the fastest-growing market in New Jersey, but they don’t have a clue how to interact with them,” he said. “This is the perfect scenario.

“When you come here, the music and the food is culturally sensitive. That’s what makes this unique.”

The event, he said, is simple.

Lina Llona, president of the Middlesex County chamber, said her group is happy to help make these connections happen.

“This year’s event easily sold out of table space, with representatives from 148 area businesses in attendance,” she said. “This expo has become an annual, not-to-miss event, as it goes far beyond networking to encourage more culture and diversity in our ever-changing work force.”

And De La Hoz is happy to play his role — even though it may make him the only angel investor who doesn’t get paid back in cash.

“The work Carlos and I do here is for free,” he said. “The reality is that we will believe entrepreneurship is the tool we have to overcome poverty.

“We have five times the opportunity to save money if we own a business than if we have a job. That is our mission.”

Ilitch organization to buy up to half of Ocean Casino Resort,...