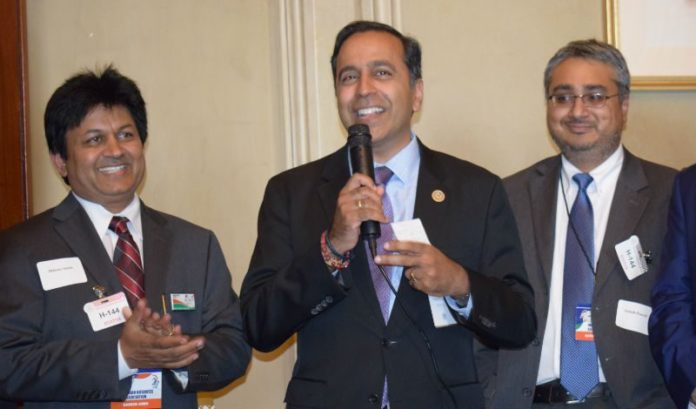 A group of South Asian business leaders is trying to leverage the growing presence of its community in New Jersey and federal politics to create new relationships at the national level.

Satish Poondi, an executive board member of the nonprofit IBA and a key coordinator of the trip, said the idea was inspired by the New Jersey Chamber of Commerce’s annual Walk to Washington train ride. He hopes to make the bus trip an annual event.

“The goal was to get industry leaders from an assortment of sectors in the South Asian communities to meet with national leaders and to start building a relationship at the national level,” he said.

“I think that we’re at (a point) where we can have, if not as large, a similar event to Walk to Washington that is geared towards the South Asian community. Today was the pilot, and our goal is to include more people to make this a larger event.”

Poondi said he can see the potential of the event.

“To have more and more buses of South Asians, leading South Asian policy and industry and retail people, join together to come to Washington and express our thoughts, our challenges that we’re facing,” he said. “It’s something we think we can make our own and cater to the South Asian community.

“It takes time. Like everything else, it doesn’t happen overnight. I think we’re on the right trajectory to make the impact that we are looking for.”

It met with a steady stream of New Jersey’s delegation and other House leaders.

Noticeably absent were three New Jersey Democrats, Rep. Frank Pallone and Sens. Robert Menendez and Cory Booker — all of whom are staunch advocates for minority communities and longtime supporters of South Asians.

The event coordinators deemed the trip a success.

And, even though national advocacy groups already exist, representing the needs of the South Asian communities, the IBA and some of the Congressional representatives said there is still more work to be done.

“We’re at a point where immigrants don’t feel as welcome as they did before, and people who want to emigrate here have second thoughts,” Krishnamoorthi said. “That’s not good for America, long-term, because we rejuvenate ourselves through immigration.”

Krishnamoorthi stressed the positive impact South Asians and other minority groups can have.

“We welcome innovators and entrepreneurs and scientists and engineers and people who really bolster our economy and create jobs,” he said. “At the end of the day, that’s what really, in my opinion, we have to keep stressing to everybody — that immigration is a net-plus for everyone. Not just for the people that are coming here, but for everyone. Our Congress needs to look like America.”

“There are so many South Asian (and) Indian communities across America … and yet we don’t see enough representation relative to their numbers,” she said. “America is better when everyone who has a seat at the table where decisions are being made looks like America.

“So, without having the voice of Indian-Americans, you are missing out on a very vital voice. For people who have contributed so much to this nation, you need to hear what their concerns are, and it has to do with so many issues, whether it’s on small business, or whether it is on hate crimes, religious diversity issues, immigration, of course — gigantic issues.”

Some of the attendees on the trip expressed concerns about the lack of understanding that national leaders have about the South Asian communities and their needs.

This is why Poondi feels trips such as this one are so important.

“There shouldn’t be any limitation on the number of organizations that are trying to inject the South Asian thought process into public policy,” Poondi said. “That being said, IBA has a unique opportunity, because we are not limited to one sector, but we have supporters and members that run across the board in all sectors, so we are able to have a comprehensive discussion of policy, not just limited by sector, but also a cross-section of the community.”

Poondi stressed the South Asian community needs and wants to be involved in every issue.

“I think it’s important for us to have a seat at the table on any number of issues, not just related to the Indian community, but all sectors of the economy that have an impact on our communities,” he said.

That includes retail, tourism, finance and health care, he said.

Lavarro, the Jersey City council president, said he was surprised by the bipartisan showing of congressmen at the event Tuesday.

“I was pleasantly surprised that both sides of the aisle saw the opportunity and value in supporting the Indian and Asian-American community, saw that they are vital, particularly in business, and vital to the economic engine of New Jersey and the fabric of America,” he said. “It’s been no surprise to me, knowing the impact the community — immigrant communities — have had economically in Jersey City for decades now.”

And the ability to attract more than a dozen representatives on its first trip shows the potential the group has.

“I think they can definitely make an impact and the opportunity to expand IBA not just in New Jersey but throughout the entire country. Asian-Americans are the fastest-growing in the entire United States … and that was mentioned more than once by the congressional representatives,” Lavarro said.