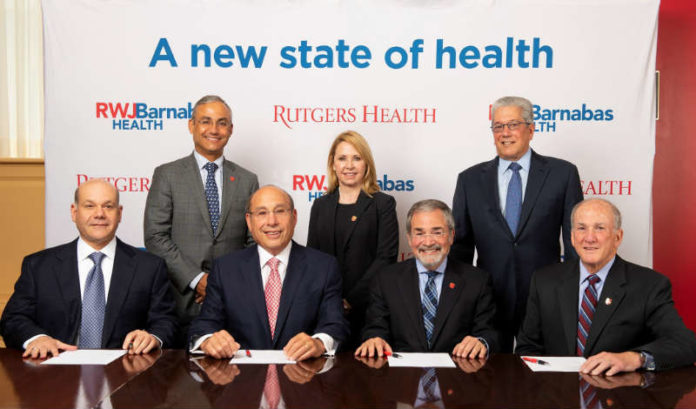 RWJBarnabas Health and Rutgers University announced a new billion-dollar public-private partnership to jointly operate an academic health system Tuesday, one year after making the original announcement that they would do so.

The partnership creates a strong working relationship between the two entities and will edge out other schools that want to work with RWJBH. On the flip side, it also edges out other health systems that have worked with Rutgers.

As part of the new strategy, a joint-employer multidisciplinary health group will be created, including 1,000 Rutgers and 2,500 RWJBH employees. It will provide an additional revenue stream for the medical school and gives both entities access to the other’s facilities and resources.

For Rutgers, that means students getting greater access to integrated learning opportunities, as well as support, from a $10 million investment from RWJBH, to stay in the state after graduation.

But the true revenue growth will come from clinical research, from attracting more federal research dollars, leaders of both institutions said.

“It is transformational, indeed,” Ostrowsky said.

“Through this partnership, we have formed the largest and most comprehensive academic health system in New Jersey and are well-positioned to take our place as a national leader in patient care, health science discovery and innovation,” he said.

An initial $100 million investment from RWJBarnabas, followed by more than $1 billion committed over the next 20 years, is dedicated to enabling the joint venture to double federal funding grants, increase clinical research, integrate the academic environment with clinical environment, create new jobs and helping keep more physicians in the state.

Ostrowsky said the investment comes from the profit margins the health system has been able to maintain and helps to support the financial challenge of a medical school.

Strom said that, since the restructuring of medical schools in 2013, the university went from 2,000 to 5,500 students applying to medicine, with an average class size of 170 students. Only 50 physician assistants are accepted out of 2,000 applicants per year.

A new satellite campus at RWJBH in Monmouth is another program the venture is likely to create more of.

The investment from RWJBH is not a charitable one, both sides said.

The clinical trials are a key component for both parties. Rutgers gets access to a larger patient population to attract greater funding for trials, and RWJBH gets access to the network that the school has already been recognized in.

“There are currently fewer clinical trials happening in New Jersey than Kentucky, and much of this is industry in New Jersey,” Strom said.

In addition, Ostrowsky said, there will be new health care professions and new facilities for care built.

He said there will be great focus on social services and creating more “neighborhood-focused heath care venues.”

Strom said this helps adapt to the revolution happening in health care, which puts more burden of services on team care rather than just the physician.

Traditionally, physicians could bill for services, which is why they were the point of entry for health care, Strom said.

Ostrowsky added that a number of real estate ventures will take place, including a new home for the Rutgers Cancer Institute, which will be complete in three to four years, as well as a new ambulatory site near Robert Wood Johnson University Hospital in New Brunswick.

How all these projects will be funded, through a mix of philanthropy, debt or capital investment, is yet to be determined, but Ostrowsky said he anticipates interest from donors and investors.

This is the latest contribution from RWJBH, which just invested $18 million in the new athletic campus at Rutgers.

The funding for the new venture includes: