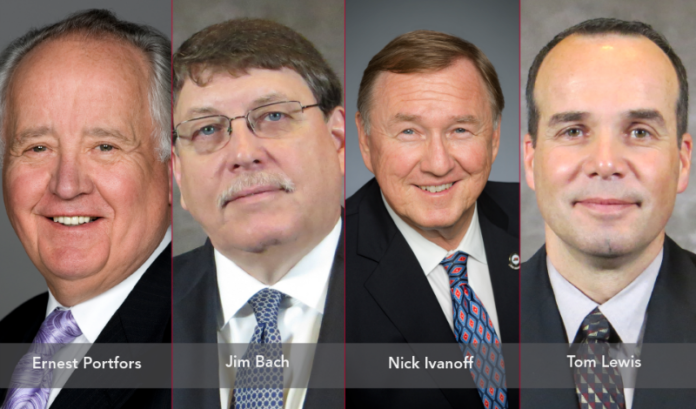 Morristown-based Louis Berger, an infrastructure and development firm, announced Monday its board chair, Ernest A. Portfors, has retired. It also announced the addition of three new board members.

With these changes, the new board of directors includes the trio as well as David Abrams, Martha Clark Goss, Lawrie Haynes, Nicholas J. Masucci, Donald Platner and Jim Stamatis.

“I wish to thank Ernest Portfors for his exceptional leadership and invaluable support over the past decade as the company mounted extensive modernization efforts,” said Stamatis, Louis Berger CEO and president. “Building on Ernest’s contributions to our company and our culture, the exciting addition to our board of three talented leaders with deep knowledge of our industry and of Louis Berger bodes a bright future for our company. Jim Bach, Nick Ivanoff and Tom Lewis embody our spirit of community and bring wide-ranging experience and expertise as well as a deep commitment to the company and its vision.”

Portfors joined the board in 2008 and became chair in 2016. Before that, he was chair of Louis Berger affiliate Klohn Crippen Berger from 2006 to 2011, following leadership roles at the company, including CEO and president, senior vice president of engineering and vice president for the Pacific region.

Bach has been with Louis Berger for 35 years in various positions. He is currently president of the company’s international division, having previously served as chief operating officer for Louis Berger’s headquarter operations and for its U.S. division, head of the U.S. operations business segment, and principal-in-charge of projects for the Port Authority of New York and New Jersey.

Ivanoff is executive vice president of the company’s U.S. transportation market segment. He previously was CEO and president of Ammann & Whitney for more than 20 years. He’s served in a number of leadership roles at the American Road and Transportation Builders Association, including chairman from 2014 to 2015.

Lewis is president of Louis Berger’s U.S. division. He’s been with the company for 25 years and also served as group vice president for the U.S. domestic business segment. Previously, he was managing of the environmental and disaster management services practice area.

Catalent invests $14M to expand manufacturing at its facility in Germany