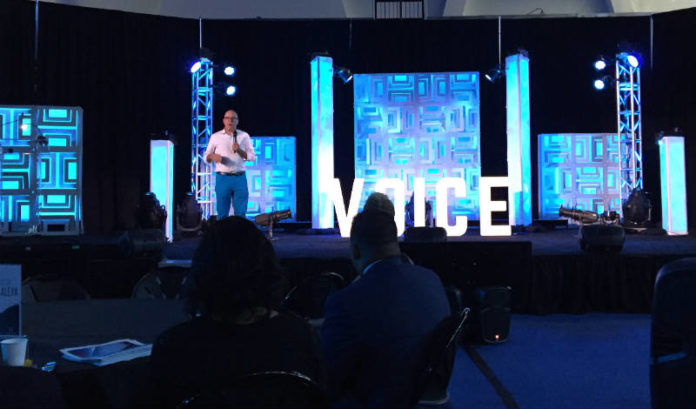 It probably wasn’t the opening the more than 1,000 people who poured into the Wellness & Events Center at New Jersey Institute of Technology on Tuesday morning for the VOICE Summit were expecting.

But here they were — at the urging of Pete Erickson, the founder of Modev and creator of the biggest voice technology conference in the country — putting down their phones and all their electronic devices and actually talking to the person next to them.

That’s right, a conference built around presenting all that voice technology and artificial intelligence not only is, but will be, started with human-to-human conversations.

Erickson made the audience introduce themselves to a stranger, and then tell that person a personal strength and weakness.

“The point that we’re making with this exercise is to put us all at the same level — to understand we all have great strengths and great weaknesses, but that, at the end of the day, we’re all simply human,” he told the audience.

For Erickson, it’s a point that can’t be lost in the rush to this new technology.

Why? Because it is the first technology that actually is like humans. Because of it, he said, we need to remember how to act like humans.

“We’re getting technology that is actually the closest thing to us that we’ve ever invented,” he said. “I started thinking, ‘What is it about voice technology that definitely has a different feeling?’

“It struck me that it’s really the first tool that we invented outside of using our hands. Communication is absolutely fundamental to the core of who we are. And, now, we’re inventing technology that is communicating with us; so, something about it really does feel different.”

Dave Isbitski, one of the lead creators of the technology for Amazon Alexa, agreed.

“I was fortunate enough to be with this product from the beginning,” he said in his opening keynote. “I was employee No. 1 in our sales marketing group.

“And I’m convinced at this point now, almost four years later, that the most important thing about this technology wave right now is people. What we all just did — when we broke down whatever boundaries existed before we opened our mouths and we introduced ourselves to each other — is huge.”

Isbitski said the voice technology that spurs products such as Alexa are different from those in the past.

Mainly, he said, it’s because technologies of the past did not impact everyone.

“What’s really exciting to me now is that (it impacts) people who have been left behind, when the technology barriers had done that,” he said. “My mom still prints out emails to my dad, but he talks to Alexa all day long. He asks for weather, he asks for music.

“It’s amazing how many boundaries that have opened up. We’re all part of that.”

Isbitski, an alum of NJIT, said voice technology is finally providing the answer to a course he had at the school a few decades before.

“I had a class about the technological divide that was either going to change things for the better or the worse,” he said. “And that it was really up to us, as people going into the industry, to make technology accessible.”

Alexa, he said, does just that.

And he pointed to both ends of the spectrum.

“I’m seeing the rise of the voice-first generation with kids,” he said. “Some of you parents here who have little ones, who maybe cannot read and write yet but are having conversations with Alexa.

“It truly is that first generation where human beings are interacting with AI every single day.”

That impact of that interaction is permanent, Isbitski said.

“As the years go by, where you’re going to see a lot of innovation (is from) people who naturally work alongside human beings and alongside AI,” he said.

This technology, however, is not all about the future.

Isbitski implored the developers in the crowd to think of past generations, not just future ones.

“That audience is here now with voice,” he said, referring to seniors. “You can create some amazing and empowering experiences with them.”

Some are as simple as the human interaction that started the morning session.

Isbitski talked about taking Alexa to a retirement community to see how seniors would interact with the new-age product.

The person said: “When you get to be 93 and a half, and you hear something besides your own voice, it helps you get through the day.”

Hard to be more human than that.

When it comes to misogynistic behavior: Words are nice … actions...