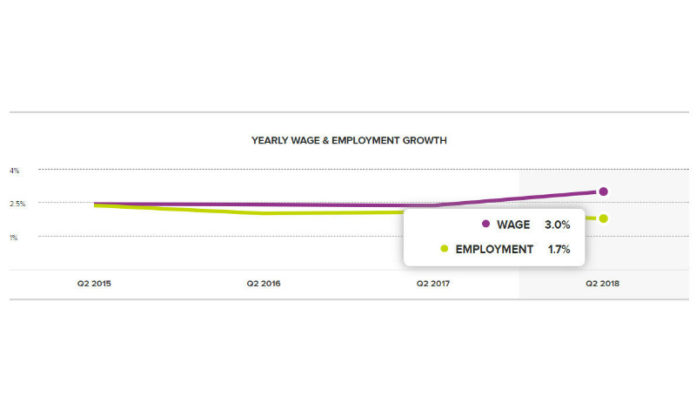 Wage growth for U.S. workers in the past year grew by 3 percent, according to an ADP Research Institute Workforce Vitality Report released Wednesday.

The growth, an increase of 80 cents, to $27.46 an hour, was driven by strong wage gains for workers in the professional and business services industry. The industry represented almost 17 percent of the workforce (3.4 percent wage growth, $35.04 per hour), Roseland-based ADP said.

Among industries, information led the way in wage growth, up 5.5 percent to $41.77 an hour.

“We’re seeing interesting shifts in labor-market dynamics this quarter,” said Ahu Yildirmaz, co-head of the ADP Research Institute. “Employment growth for new entrants has dipped to -0.1 percent, while it has increased by 4.5 percent for those who are 55 and older. In addition, job switchers who are 55 and older are seeing wage growth of 6.3 percent which is 1.5 percent higher than the prime workforce group who are 35-54. This shift suggests employers are searching far-and-wide for skilled talent and workers who were once sitting on the sidelines have begun to return to the labor market in response.”

On their own: Community banks are doing well — but they...