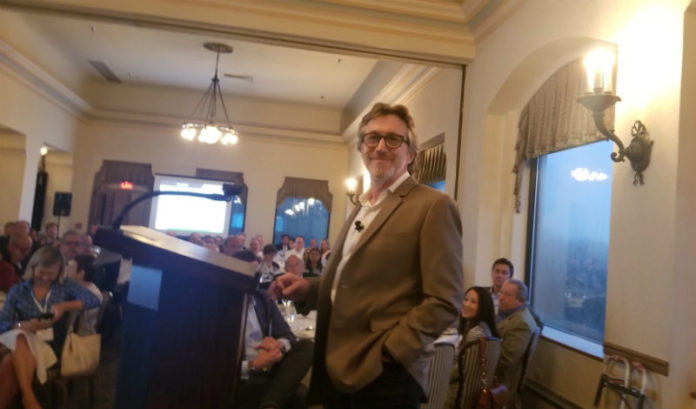 To many companies, corporate social responsibility often involves writing a check to a nonprofit.

He’s received significant recognition for the past decade after choosing Newark as his company’s headquarters, and is credited with helping the city’s revival.

At an annual dinner for the New Jersey chapter of the Association for Corporate Growth, Katz shared Audible’s inspiration, history and growth.

Today, the company employs 2,000 people in centers around the world and provides 25 billion hours of programming.

Newark, Katz has said, was a two-pronged win — socially and financially — that depended on a double-bottom-line strategy. The move in 2007 had its critics, who thought he would lose employees. Instead, the company has grown.

First, it presented an urban renaissance opportunity — a pathway to pulling up the underprivileged by providing internships to local students and providing jobs that can be filled in by locals.

Second, the company was located near New York City, with a direct train line into the financial district, which has helped make it easy to attract more than 20,000 artists for book recordings.

All that without any tax subsidies.

“I didn’t even know to ask for any subsidization, I just knew I wanted to do this,” Katz said.

He was aware of the problems the state faced with outmigration.

“We don’t make (staying) here attractive enough. Part of this is branding, part of this is … how do you catalyze change,” Katz said.

“It’s literally like, if you’ve ever been to Iceland, when you go out camping, (shove) a stick in the ground and steam comes out — there’s dark fiber in Newark,” he said.

That is one of the biggest draws, since putting in dark fiber would cost millions in New York City, and therefore be more costly to use.

Despite his optimism, Katz found politics tripping up his ambitions in the early years of growing in Newark.

“I get sucked into being chair of the Economic Development Corp. by my friend Cory (Booker, then the mayor) and I begin to see the state is literally these little principalities and everyone has got to be in the room and looking backwards by degrees. I didn’t see that political system was going to create enough change for impatient people like me,” Katz said.

The entity has seen significant buy-in from some of the biggest companies in the city.

To date, it has seen interest from 2,300 companies, of which 46 companies have received $13 million in investments.

Meanwhile, at Audible, Katz has realized some of the impact he envisioned a decade ago.

“A well-paid tech job gets you five service-level jobs and two professional jobs. A manufacturing job gets you zero. Just the way it is,” Katz said.

It used to be you could ask employees where they last worked, and it would be something like Google, he said.

But his employees come from all walks of life, including some who have been homeless.

That, Katz said, is infinitely better than writing a check.

“Our work in Newark, it’s really become the main reason people want me to appear and speak at events. I think corporations in particular are getting more interested in this grand experiment of weaving the purpose of the company into urban transformation,” he said.

The inspiration came from his world views as a journalist and working for Rolling Stone.

Embedded with people from all walks of life, Katz learned to look for meaning behind actions.

“In many ways, what Audible is about what a company can mean versus what it does,” Katz said. “For larger scale corporations, its mostly about what you do every day, not about what it actually means. That thinking process is worthwhile to keep in mind.”