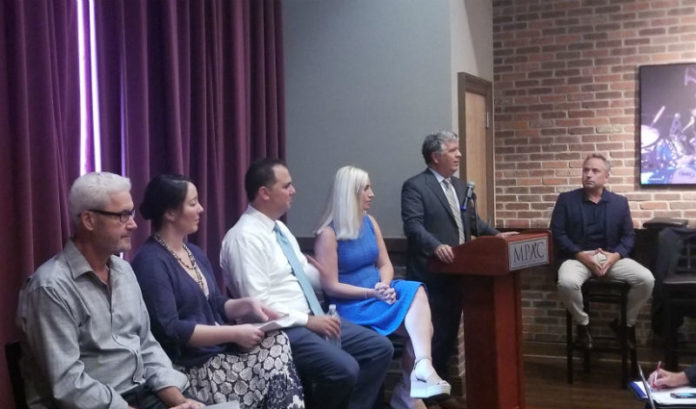 The company gets a tax break, meanwhile the residents are stuck footing the (ever-increasing) bills of the municipality.

It’s often the fiercest argument against tax abatements and tax incentives provided to companies in any municipality.

In reality, however, incentives are a powerful tool elected officials are increasingly using to help build their municipalities.

“I find this to be one of the most contentious issues we deal with at the local level,” she said.

Collum spoke to an audience of about 80 at a joint American Planning Association New Jersey chapter and New Jersey Builders Association meeting in Morristown last week. She was on a panel of mayors talking about tax abatements and how they affect municipalities.

“I think it first starts with, despite all these people in Trenton making laws, they’ve never hired a PR firm,” she said. “I mean, honestly, who ever came up with the idea of a ‘tax abatement?’ Why isn’t it called an ‘economic revitalization incentive?’ ”

Poor marketing aside, Collum explained how the PILOTs help companies afford social responsibility, while also providing their host municipalities with what is often the equivalent of taxes.

“(A) PILOT works because a project would not happen otherwise,” she said.

Projects, Collum said, everyone not only wants but now expects.

“If you were talking about a two-story building, with a lot of surface parking, with green features, with walkability in front of it … all these things you hear,” she said. “(If you’re) envisioning what people want their communities to be, guess what, you’re talking about a unicorn.

When residents hear new construction is coming to town, the demands start to stack up, she said.

“They want all these different public amenities: ‘Can the developer give us a million dollars for a park? Can the developer also provide money for more parking off-site?’” Collum said. “By the time I show them the picture of what the building is, it’s a high-rise in New York City. I’m like, ‘OK, is this what you want?’ They (residents) are like, ‘No, now it’s too dense.’ ”

The long-term tax abatements, such as PILOT agreements, ideally, provide the perks to the community without developers and the commercial property owner feeling financially burdened. The amount paid to the city is typically a percent of gross revenues, and usually amounts to more than what the city would see in property taxes.

“These exemptions not only save a developer in real estate taxes, but could provide an increase in the fair market value of the property as a result of higher net operating income,” according to a 2017 post by Livingston-based Wiss & Company.

Archer Law has explained that PILOTs can last as many as 30 years or as few as five years — depending on the purpose of the abatement.

In affluent South Orange, that became an interesting conversation prior to Collum’s election.

“South Orange has an average household income of over $130,000 and is regionally very affluent, very diverse, super progressive — we’re not even talking Hillary (Clinton), we’re talking Bernie (Sanders). We are people who have wealth, but care about others tremendously,” Collum said. “With that said, in my first election … I’m like, ‘We need a tool that’s bigger than our one redevelopment zone. What should we do?’ ”

The then-unpopular idea of a town-wide rehabilitation zone was born — mimicking efforts in areas such as Camden and Newark. Collum received intense pushback by critics shouting that she was devaluing the town and the expensive homes in the process.

In fact, the opposite happened. South Orange soon attracted significant redevelopment and the real estate market continues to thrive.

Similar stories have been seen around the state.

Atlantic City has seen an increase in the taxes collected from casinos since a PILOT agreement has been put in place. This has provided greater stability to the area, which suffered from casinos shuttering and the city facing multiple tax appeals in the past few years — its revenues were in flux, placing a greater burden on the city’s residents.

The borough of Emerson is moving forward on a project that includes a PILOT program that would net the town $10 million more in revenue over the 30-year term than if it relied on property taxes alone.

At the end of the day, transparency about the agreement is key, Collum said.

“My recommendation is to make sure you are honest, you are brutally honest,” she said. “Don’t play the game of taxpayer giveaway.