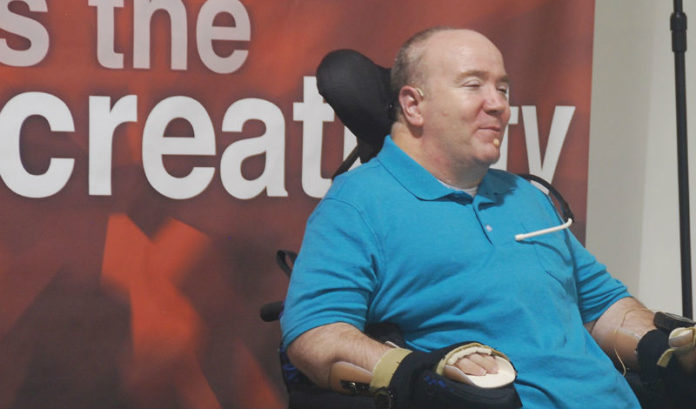 Billy Keenan said he had it all.

“At that moment in time, I was living my best life,” he said. “My wife and children were happy and healthy. At 46, I was in the best shape of my life. I was a competitive triathlete and surfer for the last decade.”

Then, in September of 2013, he experienced something almost everyone else only has nightmares about.

Keenan crashed on his surfboard in a catastrophic accident.

“I paddled out for a few hours of dancing on the ocean,” he said. “And I sat straddling my board looking up into just beautiful waves coming at me. And I saw a wave on the outside and I turned my board around and paddled like crazy to catch the wave. The wave came, I stood up and I was riding the crest of a beautiful wave. Literally on top of the world …”

Keenan, a retired military serviceman, well-known musician and high school history teacher, doesn’t slow down the story. He keeps going, knowing everyone in the audience of approximately 75 people is hanging on his words – wondering how the person they are listening to became quadriplegic.

It wasn’t as dramatic as you would think, Keenan explained.

He hit his head on a sandbar and was paralyzed instantly.

“Two and a half weeks later I woke up to the dark night of my soul,” he said.

Keenan was diagnosed with incomplete fractures to his C-1, 2, 3, 5 and 6 spinal segments with a spinal cord contusion at the level of C-4. The doctors told him he would never again use his arms or legs, and even beyond that, would likely never be able to breathe without a ventilator.

“Nothing will hit you harder than life,” he told the audience in the latest of the inspirational talks that have become a major part of his life.

This one took place last week at Marketsmith Inc. in Cedar Knolls.

“And the story that I bring to you today is all about everything that’s happened to me and the fact that through it I’ve managed to find a way to keep moving forward.”

Keenan focused on that specifically: through all the trials and tribulations he managed the keep moving forward.

His story began on that day.

He said he received a call from Steven McDonald, the NYPD patrolman who was shot in the line of duty in 1986 and paralyzed. The shooting left him quadriplegic.

McDonald, Keenan said, had been through exactly what he was going through.

“It was only a 10-minute conversation, but he said, ‘Billy, God has a plan for you. There’s a reason why you survived. You have a role to play here. And when you’re strong enough, when your rehab is done, you’re going to find a way back to life.”

And that’s exactly what Keenan has done.

It hasn’t been easy.

For Keenan, it meant simply learning to breathe on his own.

And that’s precisely, again, what he did.

Within four months, his medical staff turned off his ventilator and he’s been breathing on his own ever since.

That was his marriage.

Divorce rates in the spinal cord community are roughly 90 percent, he said.

In Keenan’s case, he said, “I ended up in that very unlucky 90 percent.”

Caring for a quadriplegic takes its toll.

“Things became quite bad for me at home,” he said.

“My health had declined so precipitously under the care of my wife that my mother, who was then 72 years old, had the step in as my primary caregiver,” he said.

This, despite one surprising fact.

“My wife was a registered nurse,” he said.

But against even the darkest of times, he said nothing could stop him from his goal to go back and teach.

“Nothing could stop me from waking up the morning of Tuesday, Sept. 8, 2015, rolling down my driveway onto a Rockland County trips bus, getting on a wheelchair lift, driving to North Rockland High School and entering my classroom for the first time, resuming my career teaching full-time 10th grade history two years after a spinal cord injury,” he said.

He was finally, once again, feeling on top of the world — of course, with a few technological tweaks that made teaching more adaptive.

“I made several adaptations, but the biggest one was using technology to make my job doable,” he said. “I got the school to give me a set of 30 Chromebook computers. Then all the student essays were done on Google Docs and they sent them to my Dropbox. My teacher’s assistant would put each essay on a Smartboard and I was able to read and grade them in that way.

“I taught beautifully and successfully for almost two years.”

“It was a devastating blow.”

But, he said all he could focus on was going back to work.

“With all four doctors around me, they said, ‘Billy, I’m very sorry, but your body can no longer stand the rigor of teaching five days a week.’

“So just like that, the thing that brought me back to life was gone.”

From there, he started to take in as much “enlightened content” as he could get his hands on, he said.

And he came across this quote: “When you’re faced with adversity, you have two basic choices. Curse the darkness or light a candle.”

And in that moment, he decided to light a candle.

Although retired, he went back to the high school a couple of days a week to share his story of overcoming obstacles and problem solving with 12th graders.

The impact he had on these kids, he said, was immediately something he knew he wanted to continue with. A path to fill the shoes of Christopher Reeves, actor turned lobbyist for people with spinal chord injuries, who died in 2004.

“(Finding a way forward) is a possibility, an ability that everyone in this room has,” he said.

“So, when the storm comes and when your suffering is upon you, I want you to remember the man in the wheelchair who found a way to keep moving forward.”

Survey: 83% of consumers are cutting back on personal spending, travel due to inflation

Editor's Desk
Tom Bergeron -
July 6, 2022
State Sen. Vin Gopal said he won’t give up the fight when it comes to getting relief — any relief — for the business...