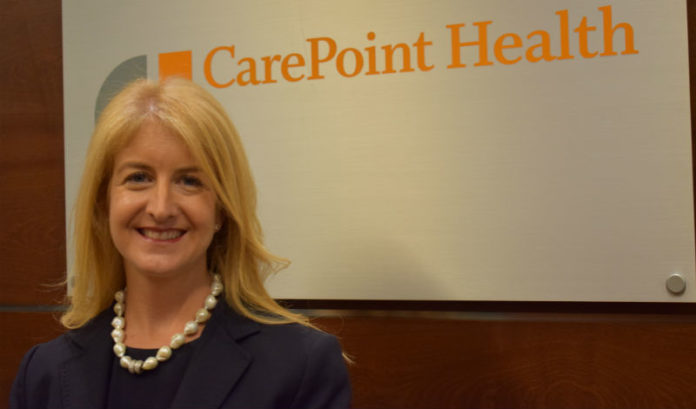 Dr. Natasha Deckmann has spent two months learning everything she can about her new role as CEO of CarePoint Health.

Deckmann, who started at the end of May, has made dutiful rounds through each of the three hospitals in the system: Bayonne Medical Center, Christ Hospital in Jersey City and Hoboken University Medical Center.

Deckmann brings an interesting background to the job. She has served in a variety of roles at health care companies, most recently overseeing $2 billion in revenue while leading Optum Health’s Population Health Solutions.

CarePoint has just gotten over a tumultuous time.

It has battled a number of negative perceptions over the past decade. After being rescued from bankruptcy in 2008, the for-profit company was embroiled in a lawsuit with the state’s largest health insurer, Horizon, and has a reputation for having among the highest Medicare bills in the country.

For its part, the Hudson County-based system has defended its impact, pointing to the property taxes and jobs it has brought to the state.

Deckmann, who said she still is developing a strategic plan for the system, sat down with ROI-NJ in her first interview since taking the job.

ROI-NJ: You’ve walked in after a number of battles have taken place. How do you plan to handle that while moving forward?

Natasha Deckmann: I certainly came in aware that there had been (issues) in the past. And obviously I wasn’t here for that. I think that times are changing. I think we have a team here who has spent a lot of time investing in the communities and demonstrating their commitment to the communities. That’s not something that you can shift the tone overnight.

The board and the leadership have been pretty clear around embracing this new chapter, embracing where we are today, embracing transparency, embracing some of the changes (needed to take us) back to what’s demanded of us with health care.

So, there’s a commitment to hopefully getting some more positive recognition for what we do. I think if we spend dollars on marketing or other things, we want to make sure its effective and people understand that there’s more to us than what might have been written in the past.

ROI: Why did you want to take on this role?

ND: In my last role, I really focused a lot on population health and I served literally every aspect of the health care industry. So, I had employers that were clients, payers, both UnitedHealthcare but other payers, state Medicaid, the federal government as well as health systems.

Systems was sort of the new emerging area for us. It was our biggest growth area and it’s certainly something that I felt I had the opportunity to do more with. So, when it was explained to me that the leadership here, the board, was not only committed to the mission of care, but also was ready to embrace the changes that are happening and was open to being more at the forefront of helping to continue to deliver quality care oriented around the consumer in a lower or more cost-effective setting, that was inspiring to me.

And so, if I could help lead that transformation, that’s an awesome next chapter for my career. I’ve been in really big organizations that had a lot of (divisions). In this, I have the ability to put more of my own stamp on this place.

ROI: What’s one of the interesting things you’ve learned so far?

ND: Each of the three cities have their unique kind of community feel. In my career, I’ve always believed that you can never truly understand a business unless you’re in the middle of it. There are just the intangibles that you can’t pick up over the phone. All three of these hospitals also have people that have worked there for generations. So, it’s been really enjoyable. I’m a people person. It’s been really enjoyable to learn about the communities, learn about the connection with our three facilities and see the differences and the pride. Hudson County has a lot of pride.

ROI: How do you see the task of maneuvering through the changes of the industry today?

ND: We are a little bit smaller in the context of Jersey. The nature of our ownership and the nature of our status means not only do we contribute to the communities and to the state and federal (governments) because of taxes, but we also have the ability to be a bit more nimble.

Health care is this rapidly changing dynamic industry that everyone’s trying to get into. Sometimes, health systems get a reputation for being slow to react, being bureaucratic and being old fashioned.

ROI: As a for-profit, you have a greater focus on the bottom line. How does that play a role in an environment where there is a lot of pricing pressure on all areas of the industry?

I believe there’s obviously lots of opinions on the ACA and health care reform. And, like anything else, there are aspects that were well thought out and there are aspects that any political party will agree needed to be redone. That doesn’t mean that we don’t have our own work to do to make sure that we’re delivering value in the right way and in a fiscally responsible way. One of the things that we’re exploring is the concept of bundled payments.

ROI: The hospitals have received some of the highest charity care payments in the state, in large part because of the very diverse immigrant population. How are ongoing national pressures, and searches by immigration agents, affecting business?

ND: It’s factually the case that some of what’s happening in the United States is happening in our communities. And we’ve seen volume impacts because of that very thing, because of the federal administration driving an agenda that has impacted people not coming to the hospital because of those types of searches. So, understanding that is important.

ROI: What do you see as one of the biggest issues in health care?

ROI: You mentioned the strategic plan is not complete yet, but what are some of the ideas and goals, or even approaches, you have?

ND: I’m very hypothesis-driven because of my consulting background plus being a physician. So, I don’t have a strategic plan yet and I don’t have everything mapped perfectly — and I think that’s good, because I’ve wanted to take the time to learn and listen. I can tell you that we are committed to the idea of being a community hospital. We’re not going to suddenly become a (Memorial) Sloan Kettering or a hospital for special surgery. That’s not the profile of our hospitals.