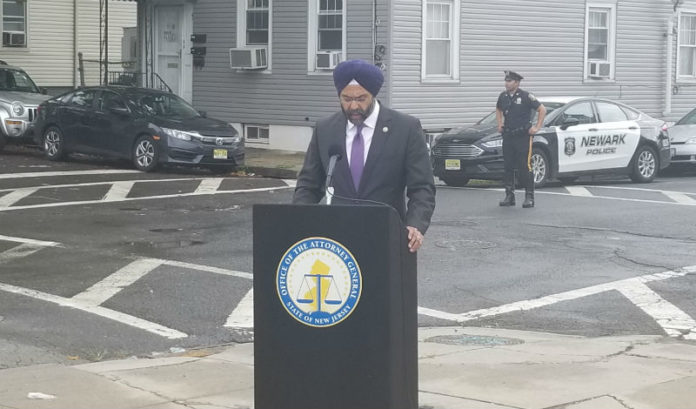 Grewal and McCabe were joined by acting Gov. Sheila Oliver and stood against a backdrop of homes built by REI Corp. and F&M Development Group in Newark, on a site that was polluted by an old cigarette lighter manufacturer, Ronson Metals.

Grewal explained the basis of a suit.

The cases are the first to be pursued by the state in a decade, Grewal and McCabe said.

New Jersey has laws on the books to press property owners to clean up sites before they sell to a new owner if there is contamination. McCabe, however, said companies have ignored instructions to do so, as they did on this site in Newark.

“As a longtime career attorney at the U.S. Department of Justice and then with the EPA, I worked closely with the New Jersey Attorney General’s office on a number of landmark cases and I was always impressed with the dedication and the ability of the New Jersey legal team,” McCabe said.

“So, I was surprised to learn upon arriving at DEP in January that New Jersey had filed no new natural resource damage cases in the entire eight years of the Christie administration. Today, we are changing that.”

McCabe, however, stressed the importance of doing so now.

“Natural Resource Damage (NRD) cases are important,” she said. “They are a primary mechanism for restoring our natural environment when it becomes polluted or damaged by industrial or other human activities.”

When asked how long it would take to prosecute these cases, Grewal said it was unknown.

“There are deep pockets, sometimes on the other side, when it comes to these NRD cases, so you can see in the Exxon case still dragging on until June, and 10 years in that case almost,” he said. “We hope it doesn’t take that much time.”

Others named in the suits include:

Not as easy as ABC: Ex-state attorney, now with CSG, explains...