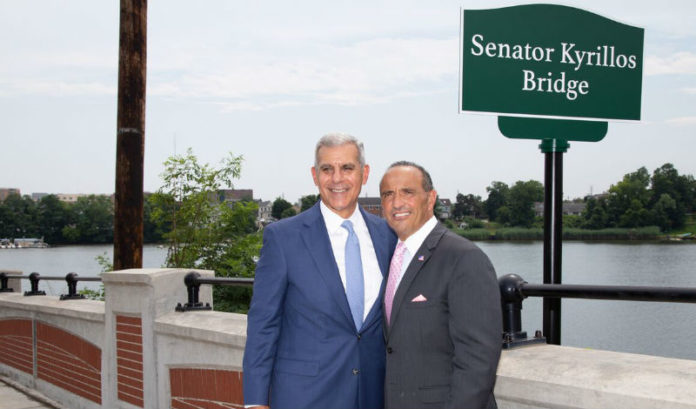 The Monmouth County Board of Chosen Freeholders unanimously approved a resolution renaming the bridge the “Senator Joseph M. Kyrillos Bridge.”

Kyrillos, who served two terms in General Assembly before joining the Senate in 1992, said it was one of the biggest honors he’s ever received.

“The greatest privilege of my life has been representing the people of Monmouth County and the great state of New Jersey,” he said. “Today’s dedication in recognition of that service means so much to me and my family. I’m deeply humbled by the actions of Freeholder Director Arnone and the Monmouth Board of Chosen Freeholders, as well as the confidence of leaders from both parties here today.

“I’ve always tried to work together across party lines to accomplish important things, and I hope this beautiful bridge can symbolize how we can and must be joined together to keep our state and country strong.”

The bipartisan group of elected officials who attended the event spoke of Kyrillos’ impact in the Legislature and Monmouth County.

Arnone said the decision to rename the bridge was an easy one.

“The dedication of this bridge in honor of Joe Kyrillos is fitting since he has always been an outstanding supporter of county infrastructure projects,” he said. “We cannot thank him enough for his service and commitment to Monmouth County residents over many years.”

In recent years The Monmouth County Department of Public Works and Engineering oversaw reconstruction of the original bridge, built in 1921, that created a safer roadway for drivers, pedestrians and cyclists. The bridge connects Middletown and Red Bank and traverses Swimming River.