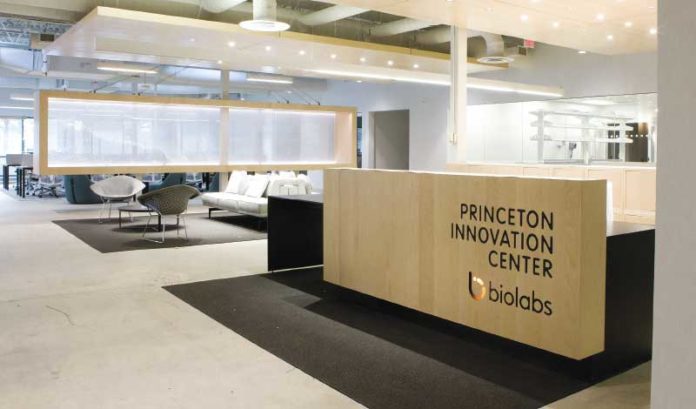 Even before scissor met ribbon at the Princeton Innovation Center BioLabs, companies were lining up to get into the brand-new incubator space.

It only opened two months ago, and seven companies with investment dollars backing them have already fully moved in, according to the center’s director, Nishta Rao. And up to 10 interested entrepreneurs tour the center each week — hoping to catch a glimpse of a facility that is fast filling up.

“Mind you, this is the summer — so I’m actually expecting things will pick up even more,” Rao said. “But we’ve already been going nonstop since opening. We’re pleased that in a short period of time we’ve gotten ahead of our own projections.”

Rao said she realizes it’s not an overnight Kendall Square — the Cambridge hotbed where entrepreneurs compete for spots at some of the country’s top biopharma incubators — but it’s still a sign of the burgeoning nature of the Garden State ecosystem.

And these platforms are desperately needed, according to a white paper released this month by the Institute for Life Science Entrepreneurship. The nonprofit organization’s report provides an inventory of current resources for entrepreneurs and highlights trends in the local biopharma incubator space.

Key among its findings: The state’s limited mix of incubator spaces are all at or near capacity.

According to the report, even though there are around 1,000 biopharma companies in the state — including 13 of the industry’s Top 20 companies — that collectively make for a large physical footprint, there was a significant unmet demand for incubator facilities serving this industry. That’s true even with the launch of new innovation spaces, the report claims.

Rao said herself that she expects capacity issues will be experienced by her only 2-month-old Princeton incubator “much quicker than anyone anticipated.”

You won’t hear any surprise about that from Thomas Richardson, president of the Institute for Life Science Entrepreneurship, which offers incubator space as well, out of Kean University.

“I think that’s why you’re seeing more of these initiatives now, because a lot of people recognize there’s such a huge need for more of these incubators,” Richardson said. “Those that already exist are not readily able to take in more people.”

Right now, there’s not a great plethora of incubator spaces dedicated to biopharma in what’s known as the world’s medicine chest; Richardson’s organization listed only six facilities in its report. And the state’s older incubators have been full, or nearly full, for years.

Anne-Marie Maman, president of the New Jersey Business Incubation Network and the executive director of the Princeton Entrepreneurship Council, the capacity issues are only becoming more apparent.

“I’ve been looking at this for many years and there’s an interest today that’s more robust than it was even three years ago,” she said.

Maman’s guess at what contributes to the recent need for more of these spaces is a trend toward consolidation in the industry. With midsized firms getting swept into the industry’s biggest companies in a flurry of deals, entrepreneurs have been freed up to lead new enterprises.

Whatever the cause, Maman is hopeful that Gov. Phil Murphy and his team will provide the necessary incentives and resources to keep these entrepreneurs in the state.

“From what I’m seeing, the governor is moving quickly on this, which is terrific,” she said. “He’s talking about some changes that we’re happy about in the incubator community, such as the talk about a revival of the Commission of Science and Technology. It was around, but had been defunded. That could provide seed funding to early-stage companies. And it’s an indication of a willingness to support this needed space.”

Paired with that is the new administration’s support for the Hub in New Brunswick, a massive renovation project that will build on the startup resources that surround Rutgers University.

At the same time, businesses such as Celgene Corp. are participating in incubator development. That Summit-based company announced plans at the start of the year to open a 16,000-square-foot facility it’s calling the Thomas O. Daniel Research Incubator and Collaboration Center.

Vincent Smeraglia is on the advisory board of that center as well as the Economic Development Authority-affliated Commercialization Center for Innovative Technologies, another resource for biopharma startups. He expects investments in incubators on the part of the state and private entities to pay dividends.

“Life science research is highly risky, and in the case of an incubator like the EDA’s center, rates are subsidized in a way that gives these companies a better chance of surviving,” he said. “If even just a very small percentage are really successful and grow into large companies, that can have some dramatic effects on the New Jersey economy.”

Smeraglia is also executive director for strategic alliances at Rutgers University, which aims to build collaborative relationships with other universities and organizations. It’s an important role, because as incubators begin to proliferate, it ups the need for bridges between institutions.

Jeanne Nevelos, executive director of the South Jersey Technology Park at Rowan University, yet another biopharma jump-starter, said that’s a regular topic of conversation in the state’s incubator community.

“The state has so many different resources, between all the incubators, accelerators and tech parks,” she said. “So, in addition to trying to spur entrepreneurial activity across the campus, a big part of our job is to connect folks with that larger network.”

Nevelos said she’s been inspired by Princeton’s new incubator and some other recent endeavors. She believes the infrastructure available to biopharma startups in the state is moving in the right direction.

For its part, the South Jersey Technology Park — which, no surprise, is nearly fully occupied — serves an important function as South Jersey’s only incubator for biopharma companies. As Richardson noted, New Jersey’s incubators are spread out, which amplifies accessibility issues for the sector’s entrepreneurs.

In a move that might be replicated elsewhere, the South Jersey Technology Park is planning now for an expansion that could keep up with the state’s increasing incubator demand.

“I’m proud that we’re tapping the potential of our existing building,” Nevelos said. “But now we want to take it to the next level. We’re at the point now of figuring out what that will look like.”

Reach Nishta Rao of the Princeton Innovation Center BioLabs at: nishta@biolabs.io or 609-423-1540.

Reach Thomas Richardson of the Institute for Life Science Entrepreneurship at: trichardson@ilsebio.comor 908-737-1922, ext. 102.

NJCU partners with Google program to train 200,000 Latino Students in...