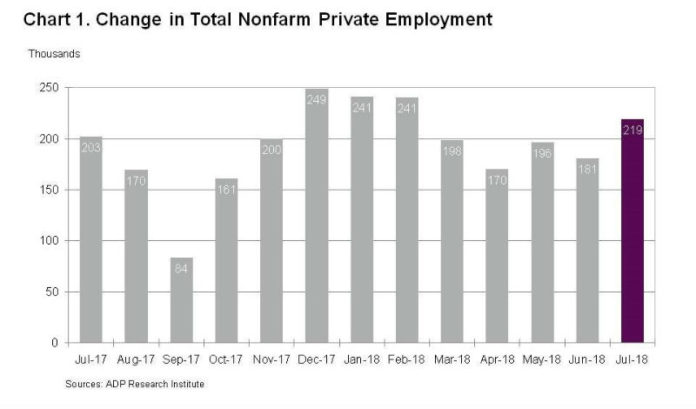 Private-sector employment grew by more than 215,000 jobs in July, according to Roseland-based ADP.

The payroll and human resources company said in its monthly ADP National Employment Report the number of jobs grew by 219,000 positions from June to July, approximately 42,000 more jobs than last month’s figures.

“The labor market is on a roll with no signs of a slowdown in sight,” said Ahu Yildirmaz, vice president and co-head of the ADP Research Institute. “Nearly every industry posted strong gains and small business hiring picked up.”

Mark Zandi, chief economist of Moody’s Analytics, said, “The job market is booming, impacted by the deficit-financed tax cuts and increases in government spending. Tariffs have yet to materially impact jobs, but the multinational companies shed jobs last month, signaling the threat.”

Among the top sectors surveyed by ADP, the service-producing sector led, adding 177,000 new positions compared with 42,000 in the goods-producing market.

Under the goods sector, the manufacturing sector was on top, adding 23,000 new jobs, while construction added 17,000 and natural resources/mining added 3,000.