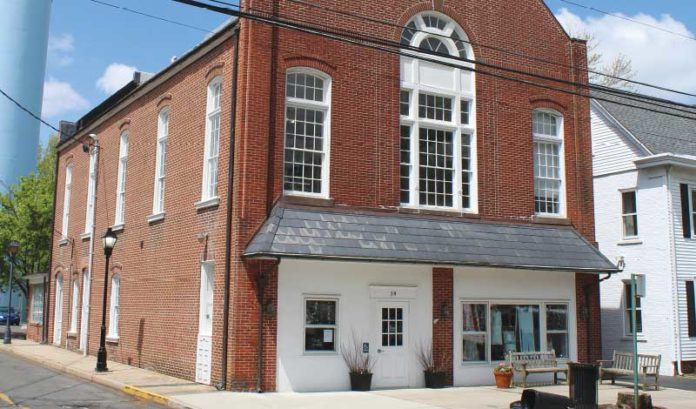 Along Pennington’s Main Street is a building once used as a city hall as well as a fire department. The brick facade of the storied structure fits with the charming character of the small town.

That building — in the center of town, next to historic homes and the town’s long-running shoe cobbling business — now houses some of the most innovative biopharma research in the state.

Inside a building from the past, the clinical-stage OncoSec Medical Inc. is focused on developing tomorrow’s cures: the future-looking area of immunotherapies.

“It’s an amazing sequence of events that led to these developments in immunotherapy, which I think has the potential to supplant chemo-radiation in cancer treatment,” said the company’s CEO, Dan O’Connor. “It’s a privilege to lead a company that is helping move the needle for patients.”

OncoSec is developing drugs which can be delivered directly into cancer tumors to help stimulate the body’s own immune system to attack the disease. While chemo has been live-saving for some, O’Connor said, it comes with much higher risk than immunotherapies have demonstrated.

The solution OncoSec is working on addresses the 70 percent of patients that have tumors that are deemed to be “cold,” which means immunotherapy drugs are not able to be completely effective. The state’s pharma giant, Merck, is collaborating with OncoSec on this new treatment tool.

For a number of reasons, OncoSec wanted to be located close to New Jersey’s concentration of drug developers. So, the company moved its headquarters from San Diego to its Pennington base this year, said Sara Bonstein, the company’s chief financial officer.

“We saw the benefit of being in the middle of a biopharma hub from an investor perspective,” she said. “There’s such good access here to scientific minds and resources that it made sense to set up our office here.”

It’s not the only company in the industry to set up in an unlikely location. In fact, Bonstein said, there’s a long history of this in the region; the global biotech firm Celgene established its base in the former Summit Middle School.

“You’re certainly seeing a lot of companies setting up in nontraditional office parts, both here and outside of New Jersey,” she said. “There’s a push in biotech for doing something different and exciting. So being in a more unique area is part of that.”

The trend of these businesses moving into once-rundown buildings in towns scattered throughout the state presents an opportunity to put these landmarks back on a town’s tax rolls.

There’s a lot of potential that the state could see more of it. Bonstein said biopharma companies, which tend to pour all available capital into the drug discovery process, often don’t want to commit to luxury, high-rent spaces.

“The nature of biotech is to be as lean as possible,” she said. “We were able to very economically set up shop here. (O’Connor) had this office up and running in weeks.”

The appeal in the Pennington base was simple, as O’Connor explains it.

“What attracted us to the building is that it had been vacant for a long time, and so we got a really competitive rental rate,” he said. “Our goal is always to use resources to get data to further develop our drugs to hopefully get them on the market. While fancy offices are great, it’s just not what we focus on. We focus on having an adequate place to work — something cost-effective.”

OncoSec’s leaders expect that young biotech experts will see a value in it, too. That’s taking on an importance with the company planning to grow its local employee base.

“One thing I’ve read about millennials is they like working in a community,” O’Connor said. “They don’t like isolated office parks. And these folks are becoming a dominant part of the labor force.”

As a kicker, O’Connor said the company’s new base is striking from an architectural standpoint in a way that most office parks wouldn’t be. He certainly speaks glowingly of it.

“It’s a beautiful building, a late 1800s-era structure,” he said. “I used to pass by and see the large flagpole above it and there always seems to be a breeze blowing the flag. It’s eye-catching. And it’s also located in the middle of a really nice community. So, we’re glad to be here.”

Dan O’Connor and Sara Bonstein pairing up in top leadership roles at OncoSec is an encore performance for them.

The company’s CEO and chief financial officer were in the same exact roles at Advaxis, a Princeton-based cancer immunotherapy company. They were also both in senior roles at ImClone Systems.

“Like any industry, being able to work cohesively together as leaders is critical, and a trust factor is hugely important in that,” she said. “In order to be successful, you have to march to the same beat. We’re able to do that as we reunite here at OncoSec.”