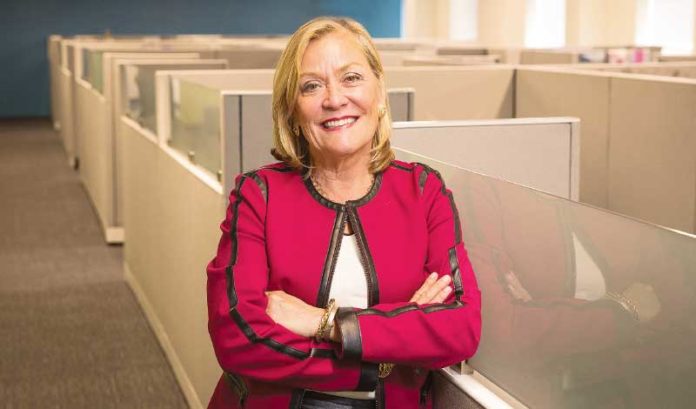 Energy efficiency in New Jersey is ramping up, Kateri Callahan said. And it’s doing so with help from one of the largest women-owned energy service companies in the U.S. — hers.

“Much of our business is driven by the utilities’ requirements to help their customers reduce their energy usage,” she said. “In New Jersey and in other states, there are monies made available for that.”

Callahan, CEO and president of CMC Energy Services — headquartered in Fort Washington, Pennsylvania, with operations in Cranbury — took over the top spot at the company in April after Eileen McGinnis, former chief of policy to former Gov. Christine Todd Whitman and chief of staff for the Environmental Protection Agency, left the position after more than a decade.

“My predecessor oversaw a doubling in the size of the company and then a doubling again,” Callahan said.

“We provide energy efficiency options and education on how to drive down energy bills through methods such as insulating homes or by simply adding shower and faucet aerators,” Callahan said.

CMC Energy Services was founded in 1977 by Doris Iklé, a German immigrant and economist, when there were virtually no women-run energy services companies in existence.

“Our founder wanted to do something to help people facing high energy bills and the impact it had on the environment,” Callahan said. “She founded the company with the mission to help and empower people to reduce their energy usage altogether.”

Now owned by her daughters, including board chair Mimi Iklé Khalsa, the family-owned, women-led company continued to grow under McGinnis’ leadership.

“We have all heard statistics that many second-generation companies do not survive, but during Eileen’s tenure, CMC thrived,” Iklé Khalsa said. “We were a good team, and together we accomplished a great deal.”

McGinnis will continue to serve on the board of directors for CMC Energy Services, as Callahan also had over the past year and a half.

“We were delighted when she accepted our offer to succeed Eileen,” Iklé Khalsa said. “CMC will benefit greatly from Kateri’s national and international reputation and skills in the energy efficiency industry.”

Callahan began working in the energy industry in 1986, initially working to advance wind and clean coal technology with public utility companies, as well as promoting battery hybrid and fuel cell electric vehicles in the automobile industry.

“When I first started, I quite often was not only the only woman, but also the youngest in the room,” Callahan said.

Callahan advanced to become president of the Alliance to Save Energy, a nationwide organization of more than 170 members aimed at enhancing energy productivity and security, in 2004.

In that role, she spearheaded the creation of the Southeast Energy Efficiency Alliance, the European Alliance to Save Energy and the world’s premier energy efficiency conference, EE Global.

“My entire career up until this point has been in policy advocacy and coalition building,” Callahan said. “I thought it would be interesting to move from thought leadership into actually seeing how the policies I spent my career helping to put in place are conditioning and shaping the market.

“I am honored and excited to join CMC at a time when the energy efficiency services industry is evolving so rapidly.”

It’s just not a new one.

Callahan said CMC has provided services in the state for nearly four decades.

“In New Jersey, though, there currently is a discussion regarding who should run statewide energy efficiency programs, and how much of the work, if any, will continue to be completed under the New Jersey Clean Energy program or by the utilities,” Callahan said. “It may cause confusion in the marketplace if these efforts are not coordinated.”

Callahan also shared her concern that what recently happened in Connecticut might also happen in New Jersey.

“If a state has a budget crunch, it may raid the funds made available for energy efficiency to help balance the state budget,” she said. “The uncertainty of legislative, regulatory and budget decisions is one that we always must prepare and adjust for.”

So far, the news in New Jersey is good.

“Legislation was recently passed that requires utilities to meet 2 percent of their demand with energy efficient measures,” Callahan said.

Gov. Phil Murphy signed into law in May the establishment and modification of clean energy and energy efficiency programs in New Jersey, requiring each public utility to implement measures to annually reduce the usage of resources in its service territory.

“States and their public utilities will be spending billions of dollars in the coming years on energy efficiency, which will create great opportunities for us to grow our business,” Callahan said. “In New Jersey, what will come from this legislation will hopefully be a five-year plan that will give us a chance to look at our opportunities to win bids and deliver excellent service.

“We don’t yet know what the size of the pie will be, but we are ready and willing to do the work.”

Kateri Callahan, CEO and president of CMC Energy Services, said she could count on one hand the number of women in the energy industry in the late 1980s.

“That somewhat changed with the advent of clean energy,” she said. “It wasn’t a crowded space, the boys’ network did not exist, and it was a way in for women.

“I also think the notion of providing new ways to use energy more wisely and in ways less harmful to the environment proved attractive to women looking for a mission to help others, and not just a paycheck.”

At CMC Energy Services, the entire leadership team is female, and, in New Jersey, women also make up more than a third of its employee base.

“We have benefited tremendously by having women leadership in energy, but we need more women like me who want to come and spend their careers in this space,” Callahan said.

To that end, Callahan, a member of C3E Ambassadors, a group of senior professionals committed to the recruitment, retention and advancement of women in clean energy, said she plans to continue this mission in her new role at CMC Energy Services.