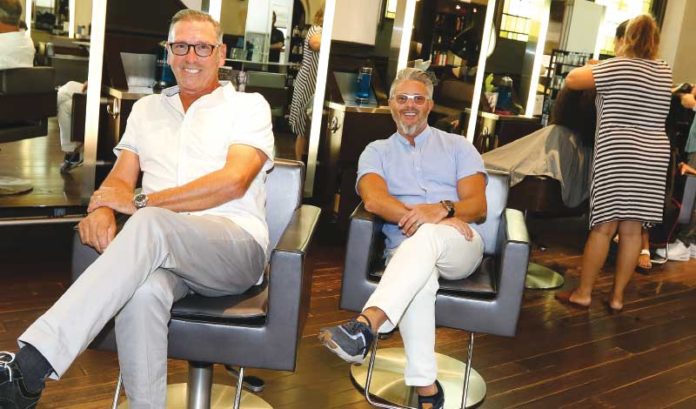 It was anything but a split-second decision to relocate their salon, Richard Cronk and Dominick Sansevero said.

“We bought the building in 2005 when the economy was booming, and it took us more than two years to draw up plans and obtain approvals and permits,” Cronk said. “We had only begun construction in 2007 when the economy collapsed in 2008.

“It went from being a really exciting time to a very scary time in our lives.”

Nearly $1 million over budget and unable to receive further funding from banks, the co-owners believed they ultimately would lose the business they had spent the last decade building.

“But, yet, here we are,” Sansevero said.

Despite relocating in the wake of a recession, Bangz Salon and Wellness Spa, a leading multimillion-dollar salon and spa in Montclair, has increased its revenue by 920 percent since opening nearly 25 years ago.

And today, co-founders Cronk and Sansevero said the business is still attracting more than 50 new clients each week.

“That is when a larger space on Bloomfield Avenue became available and we decided we would merge our two businesses together under one roof,” Sansevero said. “We were there for 15 years. That location was unbelievable for our business.”

Building their brand required no advertising on their part, Cronk said.

“In addition to foot traffic, Bloomfield Avenue has nearly half a million cars drive up and down it each day, and we were right at the corner of a traffic light,” he added. “We held a captive audience all day.”

That is, until Cronk learned a nearby 19th-century Masonic Temple was for sale.

“I was one of the last Masons to be raised in the building before we consolidated with another Masonic Temple in Caldwell,” Cronk said. “So, I offered to buy it.”

For Bangz, expansion has come in more ways than just a bigger location.

While keeping much of the architectural history intact, such as the original brick and ironwork and stained glass, Cronk and Sansevero vertically expanded the space from 4,000 square feet to nearly 10,000 square feet while also using renewable resources such as bamboo floors and energy efficient light bulbs.

And, despite not having the same sort of foot traffic, their business reputation followed when they relocated Bangz to its current location in 2009.

“This space has since doubled our business,” Cronk said.

“We created a curiosity about what was inside the building and an additional ‘wow’ factor when we moved here,” Sansevero said. “We simply needed to continue backing up our reputation with additional stylists, estheticians and therapists.”

Bangz Salon and Wellness Spa was able to nearly double its offered services and staff to 90, including 40 stylists.

“Based on quarterly reviews, we provide our clients with seven different levels of skill and cost, with certain benchmarks,” Sansevero said. “This provides our employees with the incentive to continue learning while growing their new and returning clientele.”

Rated one of the Top 100 Salons in America by Elle magazine, Bangz currently caters to more than 800 clients per week, Cronk said.

However, clients also can choose to book discounted services with apprentices within Bangz Academy, in which early-career employees work with the Bangz Design Team to complete an extensive in-house and off-site training program.

“The backbone of our business is the training we provide to our people,” Sansevero said.

It is rather atypical of the industry, Cronk said.

Cronk says Bangz always has aimed to do business differently.

“The way the industry typically operates is that one salon will steal operators from another,” he said. “But, when Dominick and I went into business together, we decided we did not want to do that.

“So, we developed an educational program for our business in which to train people directly out of school. We don’t typically hire people from other salons because we prefer to grow our own.”

The duration of one’s training can vary, Sansevero said.

“It is up to the individual,” he added. “Some people complete the academy in less than a year while also working in the salon, but for others, it might take two.”

Peter Orcinoli, president of Halo Beauty Group, said one of the only ways to achieve that level of growth is to also expand the number of services offered for existing clientele.

“I’ve been in business for nearly 20 years working with different product manufacturers, and Bangz Salon and Wellness Spa is a known leader and pioneer in the industry,” he said. “Salons and spas, especially those within a 50-mile radius, look up to Bangz for its work and expertise.

“So, I wanted to help the salon continue to grow by bringing a new service to the salon — something in which clients could walk in for a consultation and change their entire look in less than two hours, with no commitment.”

“The bar creates a presence in the salon that now encourages more clients to (inquire),” Orcinoli said. “People get extensions for many different reasons — to fix a bad haircut, to correct color, to add volume, to change the geometric shape of their haircut or to add length without waiting to grow it out.

“For example, nearly every celebrity is wearing hair extensions today. And, for our consumers who are so inspired by both print and social media platforms, the only way to achieve such looks without destroying one’s hair is with extensions.”

The bar certainly has increased sales.

“Stylists have never before carried extensions to be able to create this sort of same-day service on demand — and speed of service in a salon during bookable hours is always a priority,” Orcinoli said.

And seeing is believing.

“The more before-and-after photos we post to social media, the more people who come in for this service over the next month,” Orcinoli said.

Cronk and Sansevero said they are happy to continue expanding the business within, instead of accepting multiple offers to expand elsewhere.

Their employees are, too.

Despite continued growth, Cronk said they never stop working to not only grow their own business but also the power of the Bangz brand.

“Every one of our stylists posts daily to Instagram,” Cronk said.