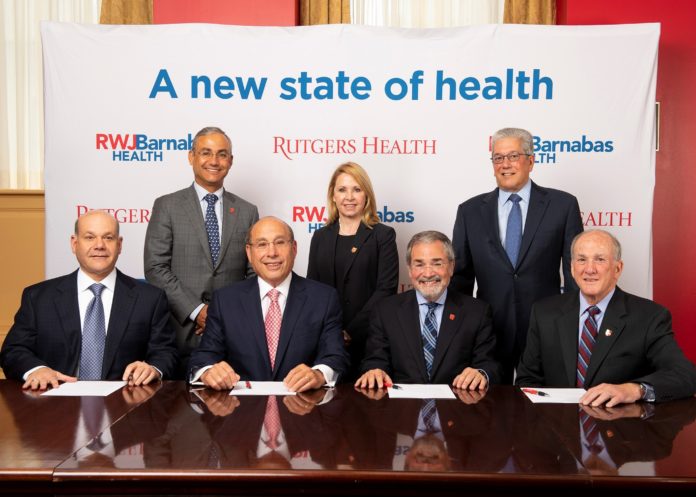 The recently finalized public-private partnership between RWJBarnabas Health and Rutgers University is no surprise. It has been in the works for a year. But, still: Wow.

RWJBarnabas — the largest healthcare system in the state and the state’s largest private employer (33,000 employees, 9,000 physicians and 1,000 residents and interns) — will invest more than $1 billion in medical research and education at Rutgers. The goals are to draw more federal research funding to New Jersey and expand treatment options for New Jersey residents through a system that will integrate the latest research, medical training and clinical care. The partnership — it’s not a merger (more on that in a moment) — will create what Rutgers President Robert Barchi called “one of the most comprehensive” academic and clinical health systems in the country.

RWJBarnabas will make an initial investment of $100 million to attract leading researchers, medical-school faculty and clinicians to Rutgers — a move expected to double federal funding for research at Rutgers. Twenty-two states currently receive more research funds than New Jersey from the National Institutes of Health, according to NJ.com. “Right now, there are fewer clinical trials in New Jersey than in Kentucky,” Rutgers Biomedical and Health Sciences Chancellor Brian Strom said at a briefing after the Rutgers Board of Governors gave final approval to the partnership last week.

Also, some $10 million will be earmarked by RWJBarnabas for financial support of Rutgers medical students who remain in New Jersey.

And these initial investments will be followed by investments of at least $50 million a year over the term of the 20-year agreement.

For people who need medical care in New Jersey, a key aspect of the partnership will be the creation of one of the largest medical groups in the country, with 2,500 professionals from Rutgers Health and RWJBarnabas providing hands-on health care, including expanded access to clinical trials.

New Jersey’s health care industry, while large and mostly vibrant, has long been overshadowed by the giants of academic medicine and research in Philadelphia and New York City. Now, this partnership means the state will be poised to grab a greater share of the nation’s more than $3 trillion-a-year healthcare industry — with New Jersey patients reaping the benefits.

Rutgers and RWJBarnabas officials deserve praise for finalizing what had to be complicated negotiations. No doubt, plenty of egos had to be checked at the door.

Employees of both institutions will maintain their existing status and salaries, and Rutgers and RWJBarnabas will continue to be governed separately. But a joint committee with equal representation from each institution will provide strategic planning and oversight of the new integrated health system.

“Synergy” is a much-overused term in the business community. But it’s more than a buzzword. And partnerships such as this one are a perfect example of the good that can come when institutions work together.