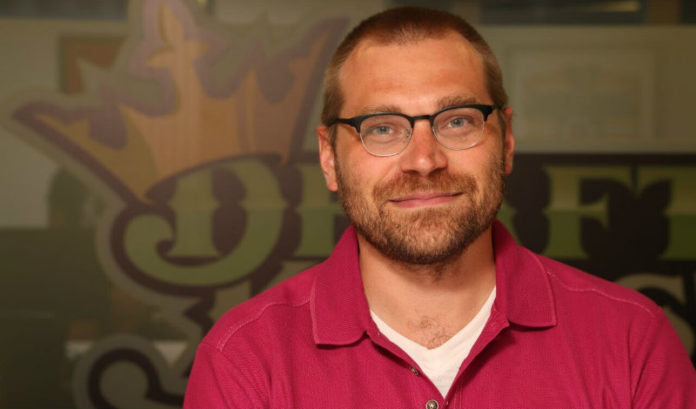 Users will be able to place multiple types of bets, including live in-game bets, on major and niche sports in the U.S. and around the world, the company said in a release.

Users also will be able to toggle between the company’s Fantasy Sports and Sportsbook offerings, DraftKings said.

DraftKings is able to do this through its partnership with Resorts Casino Hotel in Atlantic City. And, while the platform is being launched in New Jersey, DraftKings’ officials said the company is preparing to expand the platform into other states, as sports gambling is approved.

Matt Kalish, a co-founder and the chief revenue officer at Draft Kings, spoke with ROI-NJ about the venture.

ROI-NJ: This seems like a natural progression for the company, since so many feel fantasy sports already is a version of sports gambling.  Talk about how the company got to this point?

Matt Kalish: We’ve been offering daily fantasy sports for six years now. That is our business. And we’ve been adding sports, adding game variety. When the prospects of a legal sportsbook product in the U.S. became more realistic in the middle of last year, this was something that we jumped on it immediately, because it has so much natural overlap with the customers that we already have.

ROI: How many customers do you have — and how much of this move is being made to prevent them from going elsewhere?

MK: We have about 10 million customers in the U.S. A lot of them based in Jersey. So, with a fair share of customers already in the database, (sportsbook) is a product that we’ve heard consistently from our customers. Not only do they want it, but they’re already playing. They’re just doing it on the black market, effectively, like in an unprotected environment.

So, the idea of coming into New Jersey, offering sportsbook, working with the regulators in the Division of Gaming Enforcement to put together a safe-to-play consumer product that has all the protections that people deserve and should have right now is something that was really high on our list.

For the last year or so, we’ve been working on building a DraftKings sportsbook. So, we’re really excited for Day One of the kind of the open market in New Jersey and being the first offering it in the state.

ROI: You talk about rules and regulations in New Jersey. Obviously, New Jersey has had casino gambling here for a generation. Is that a help or a hinderance?

MK: The Division of Gaming Enforcement in Jersey is a really innovative, cutting-edge regulatory division. They’re not afraid to take the lead in the U.S. on mobile sports betting. They drafted the regulations that I think will be the basis that most or all other states will use. There is zero fear on their end about leading there, and they’ve been really great to work with, as well, as an operator.

There are people that we’ve met with day-in and day-out for the last several months and went back and forth about the product we were building. We just wanted to make sure that what we put forward was going to meet their high bar and meet our own. I think the fact that that division has been in place, overseeing Atlantic City for so long, probably put them in a really good position to lead the country on mobile sports betting.

ROI: I think a lot of people are interested to see what sports are going to draw the most attention. Obviously, the NFL is going to be the leader of the pack. Or is it? You might have better insight than others to understand what people want. Is football the major mover people think it is?

MK: Typically, when people first sign up daily in daily fantasy sports, football is the big draw to register a new account. It’s nice that NBA season kicks off about a month, month and a half into the football season, so there’s that a natural crossover for people who want to play every day, not just once a week. They can come on and start playing NBA and Major League Baseball as well, and golf majors in the middle of the summer, kind of keep it fresh in the summer period.

So, it’s a very seasonal business, but there’s always something going on. I think with the DraftKings platform, people can very fluidly jump into new sports. It’s not hard to try a new sport for the first time. It’s very unintimidating. I think it’s something that we expect to be a product that engages people all year long.

ROI: All businesses are going to have a niche. Some feel DraftKings is different than hard-core Las Vegas gamblers. What is your business model? How much is it focused on just converting the fantasy sports user?

MK: Draft Kings has 10 million customers, but it’s by and large extremely casual. The most recent data shows that 40 to 45 percent of our customers don’t play for more than $1 a day. So, it’s very casual.

Our goal is to really have something for everyone. If you want to play every day and take it pretty seriously and make fantasy sports or Draft Kings sportsbook a bigger part of your life, you can do that. But, by and large, it’s extremely casual. And I think people know the most common behavior we see is people play once a week, they’ll pay for a dollar. It’s nothing more than just kind of a very recreational product.