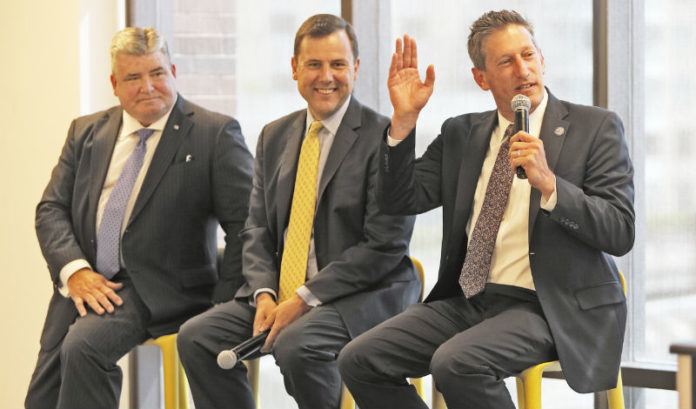 It wasn’t much of a surprise. Andrew Zwicker, the only physicist in the state Legislature, not only is in favor of growing the New Jersey economy through innovation-type programs — he said scientific evidence (or, in this case, economic evidence) proves it is the best way.

“If you look historically at public dollar investment in innovation, you see some really interesting things,” he said. “You can go back into the ’60s and the federal government and the billions that were put into the Apollo project to send astronauts to the moon. For every public dollar spent on Apollo, about $7 came back in economic development.

Zwicker was speaking last week at the business school at New Jersey City University during an invitation-only event of key business leaders from companies listed in the NJCU New Jersey 50 Index, a fund based on the 50 top public companies headquartered in the state. (Click here for more on Index.)

Zwicker, who has taught at the Princeton University Plasma Physics Laboratory for more than 20 years, said it’s easy to make the case.

And that other states — namely Massachusetts and Pennsylvania — have been hurting the New Jersey economy by doing just that in the past decade.

“Massachusetts (has) been investing public dollars into their life sciences and they’re getting about a 4-to-1 return on investment,” he said. “Pennsylvania is doing a similar sort of thing through its Ben Franklin Technical Partners (program). They’re seeing roughly 3-to-1 (return) headed toward 4.

“So, if you had an investment where you say, ‘I can maximize my probability and be somewhere around 3-to-1, 4-to-1,’ and you have very limited amount of capital to do it, it seems to me like it’s an obvious thing that the state needs to do.”

“Innovation to me is not any particular industry,” he said. “In my opinion, it relates to speed and change. It relates to mobility and to risk.

“I think we have to continue down that path, so employers will see that our workforce is going to have that kind of innovative spirit. And the state has to show that we’re going to reward that kind of innovative spirit. If you take some risks with your capital, we want to make sure that you’re going to have a very reasonable expectation for rate of return.”

Kean said investing in innovative ideas doesn’t always have to be big picture.

He pointed out the change to the state brew pubs regulations and the impact that it had.

“It’s had one of the fastest rates of growth, of any industry,” he said. “All we did was, on a bipartisan basis, change the law to allow small brew pubs to grow. It’s like an 880 percent growth in an industry.”

These opportunities, he said, are out there.

“Starting in small downtowns, you have to look block-by-block as well as thematically on innovation because that’s how we’re going to get people going to say, ‘I’m going to be here for another decade and I’m going to make the important investments in education and infrastructure to get this thing done,’” he said.

Zwicker, named chair of the new Science, Innovation and Technology Committee in the Assembly, stressed investing in innovation trickles down to other areas.

New Jersey, Zwicker said, has a lot of possibilities.

“We obviously have been known as the medicine chest to the world for a long time now; life sciences are an obvious place where we should be,” he said. “But right behind us (here at NJCU), is the financial capital of the world. So why isn’t New Jersey pushing hard in fintech, for instance, as an innovative thing?

“We’re also the Garden State. So, where are we when it comes to innovation in agriculture?

“It’s not just simply a bunch of physicists coming up with whatever their latest little invention is. It’s about smart, targeted job growth, using our strengths, using our location, whether that’s New York, whether it’s down by Philadelphia (or) using what was trying to be branded Einstein’s Alley, which was going from New Brunswick down to Princeton, and I believe should go all the way down to Trenton.”

Zwicker said his committee is working on bringing these changes to the state.

And it’s also working on one more thing: Promoting them.

“It is a home of so many different things with this remarkable location that we have.”