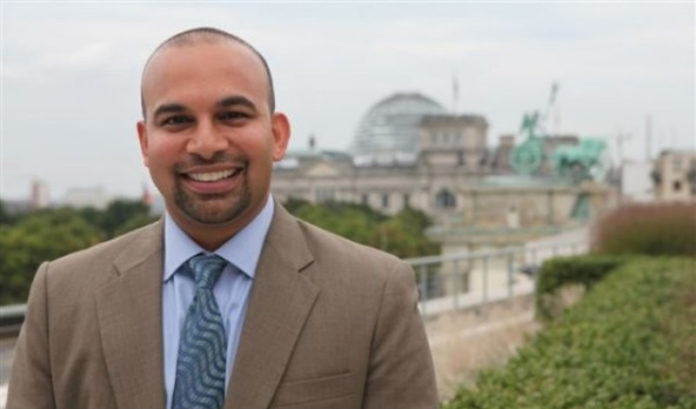 New Jersey has always been able to attract foreign companies — and has done so with very little outreach in recent years. But that is all changing with the creation of the new Office of International Trade and Investment.

The Aug. 1 announcement of the new office, under the umbrella of the state Economic Development Authority, marks the beginning of a concentrated effort to create direct lines of communication between New Jersey’s government and various foreign investors.

The director of the new office, Wesley Mathews, is on loan to New Jersey from the U.S. Department of State, where he has served as a foreign service officer for a decade. He spoke with ROI-NJ about the goals of the new office, and the efforts — including trade missions with Gov. Phil Murphy — he will lead to attract more foreign investment.

ROI-NJ: Tell us why New Jersey needs your office if we’ve been doing fine without the extra effort and outreach?

Wesley Mathews: The responsibility of this office is to attract FDI (foreign direct investment), but it’s also to kind of re-establish a lot of our real relationships with the diplomatic community in the greater New York-New Jersey area. I mean, we are really in a prime zone. My goal is to meet with as many consulates as I can, especially the Top 25 countries that are invested in New Jersey, and strengthen those relationships. Make sure all of those consuls general and ambassadors come to the Garden State and see for themselves the kind of the value profit that is the state. The governor is very willing for all of those representatives to come visit Trenton and have a meeting with him to discuss the opportunity, so that that’s also a big responsibility of this new office. New Jersey is (not) coming from a position of weakness. I mean, that should be important to note: that we have a history of FDI attraction.

ROI: How did we get to be in the position we are currently in?

WM: There was a time in the ’80s and ’90s where there was a division of international trade, in the old Commerce Department, that was focused on exactly what this new office is going to focus on. I just think over the last 15 to 20 years or maybe over the last decade (is) where we lost. We lost our footing on how to go and seek foreign direct investment into New Jersey, while at the same time we see almost every state in the union that has an overseas presence somewhere. If you talked to some of the businesses (here) and you ask them why they decided to stay in New Jersey, it sounds cliche, but it’s not: if you’ve talked to the pharmaceutical manufacturers — there’s several of them that are Indian. I don’t want to name them, but we’ve met with them and I asked them very frankly, ‘Why did you decide to stay here versus moving to a low tax state?’ They can’t get the talent, they can’t get the workforce. It’s not that easy to pick up and move to Texas if you’re a pharmaceutical manufacturer, coupled with the fact that, if you can’t get the workers, there is no point in going. I mean, you look at all of the successful diaspora populations, from the Jewish population, the Italians, you look at the Indians that have been here for decades and decades. The German and other European countries, you look at the Central and South American diaspora populations. Everyone has succeeded, if not thrived, in New Jersey. New Jersey is home to one of the most diverse labor forces in the country, and it’s ideal for foreign-owned businesses.

ROI: Let’s talk about the trade missions to Germany and Israel in the fall. One country is close to the state already, the other is close to the governor. What are you looking to get out of the trips?

WM: My job is relatively easy, because we have a governor who is very willing to lead these trade missions overseas and he has been successful in recruiting businesses to the state. In the fall, the governor has announced or discussed intentions is to lead a trade mission to Germany and Israel. People will focus on different sectors for Germany. Obviously, they have a strong focus and investment in New Jersey in the life science arena, in the pharmaceutical arena as well as — you talk about the economy of tomorrow — offshore wind, which is a priority sector for the administration. Several offshore wind companies are either German or have their headquarters in Germany. So, we’ll devote a large portion of that trade mission to Germany on offshore wind, as well as life science for Israel. We will be looking to partner with some of their entities around innovation, so, I think you could look to see some agreements around that. Also, Israel has strength in cybersecurity. So, we’ll look to see what kind of investment opportunities there are for their cybersecurity companies that have escaped.

ROI: How about the higher business taxes that were just passed in the state, and the uncertainty at the federal level? Doesn’t the timing of it all negatively affect your prospects as you set out on this endeavor now?

WM: I think the governor, with his ‘stronger and fairer economy’ theme, I think he wants all of us to think more broadly about how we could improve the climate for all businesses, as well as communities in New Jersey. So, I think you’ve heard the governor talk about restoring New Jersey as a ‘good value for the money’ state. As a state, we can’t affect federal trade policy except to make the effect or the damages to the state’s known to our legislators. So, the governor has a representative in Washington, D.C., who I am in almost daily touch with, and we take specific cases of domestic companies or foreign companies based in New Jersey that are being harmed by some of these tariffs, particularly the ones in Canada that took effect July 1. We’re kind of in the awkward situation of having foreign governments come to us to tell us how our own businesses are hurt by federal tariffs. I’ve never experienced that in my career. We’re talking to (the Department of) Commerce and talking to the State Department as required or needed.

ROI: Speaking of, the latter is also your employer. Tell us about how you ended up working for the EDA, and how your history and the governor’s history helps the state.

WM: I’m a career foreign service officer and I’m still in the foreign service. I’m actually just on loan from the State Department to the state of New Jersey. In my 10 years being stationed around countries overseas, there was not one New Jersey delegation that came there. I mean, Gov. Murphy was our chief diplomat in Germany and he was there for four years and he welcomed many other states, many other delegations from various states, but never from New Jersey. And he would always say, ‘I’m kind of embarrassed by that.’ New Jersey, because of its location, because of the talented workforce, its pedigree, it gets a fair amount of foreign investments just from those things, just from standing still. He’s been a banker based overseas, he’s been an ambassador based overseas, so he gets it. It’s great that we have a leader that does it. We need to do a better job of, frankly, marketing our state and the assets that make us great. I mean, I’ve been here four months — before that I was overseas for the last decade — you can easily get caught up in criticizing the state for everything that it lacks. I think it’s our job to make sure that foreign investors and foreign firms really understand the value proposition that is New Jersey.