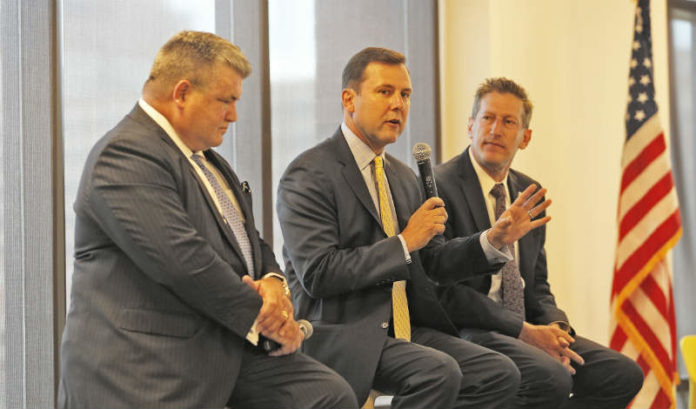 A word of caution for those trying to push through more legalization of cannabis in the state: There doesn’t appear to be any movement in the Legislature.

At least, that was the sense after listening to Republican Sens. Tom Kean Jr. and Steve Oroho, along with Democratic Assemblyman Andrew Zwicker.

The three were on a panel last week at the business school at New Jersey City University during an invitation-only event of key business leaders from companies listed in the NJCU New Jersey 50 Index, a fund based on the 50 top public companies headquartered in the state. (Click here for more on the index.)

Their views seemed to fall along the predictable party lines.

Oroho (R-Sparta) said he is against more legalization. Among other reasons, he said it will bring a lot of things, but not necessarily more revenue for the state.

“I’m of the opinion that quite frankly, it’ll cost us (in social costs),” he said. “The one thing that we always do, is we overestimate how much revenue comes in and we underestimate what the cost will be. We’re very good at that.”

Oroho said expanded legalization of cannabis will send a mixed message during a time the opioid crisis is overtaking the state.

“I worry about it,” he said. “That’s me personally.

“If the Senate and the Legislature agree to something — now, they’re having a hard time getting the votes — that’s something that I personally would not support.

Kean (R-Westfield) pointed a number of reasons for opposition.

He said there would be an inability to detect impairment by driving. A fact, he said, that has led to increase in insurance premiums in Colorado. He said that increased liability will rip through a number of industries.

In addition, Kean said he was worried about the impact on brain development.

“Brain development is not stopping at 18 in people’s lives, it’s up until 25,” he said. “When you look from the cannabis input impact on brain development, I’ve got some serious health concerns.”

Even more, Kean said potential revenue is not a reason to change the law.

“To simply say we can get more cash here is not a reason to pursue a policy,” he said.

He said studies about increased insurance rates are mixed. And there have been studies that show cannabis is no more addicting than anything else.

Zwicker said extra revenue is an added benefit. One that can be counted on.

“I think the one thing you can look at from Colorado, which is clear, is the amount of revenue that they have received from it (since they legalized it),” he said. “Some of the projects (and) short-term projections that we saw during the budget battle that scared us, there’s no doubt those were just made up numbers. But you can look at what Colorado has pulled in and get a rough idea of what to expect.”

He also pointed to the social justice benefits that would come with decriminalization.

“We are a couple of years away from figuring out a DWI, where it’s under the influence of marijuana,” he said. “That is certainly a concern. The studies about auto insurance I’ve seen are mixed. But I think the social justice piece of it from my perspective far outweighs some of these other concerns.”

“There’s a bipartisan bill that would decriminalize very small amounts (of cannabis) … and that wasn’t even allowed a hearing in the state Senate,” he said. “If decriminalization is really the social justice issue, then decriminalize it as a solution as we’re looking at other issues.

“But there is a solution that’s not being allowed to be considered in the Legislature right now to address that social justice concern.”

Read more of ROI-NJ’s coverage of the event:

House passes Apprenticeship Act — bill that could create thousands of...