Home Politics Which layer of government in N.J. needs to be cut? Depends where...
Facebook
Twitter
Linkedin 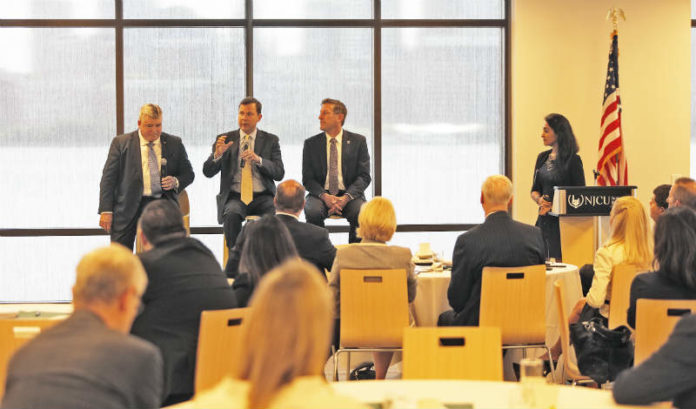 A way to curtail some of the high costs of government in New Jersey may not necessarily be shared services — it could be about eliminating layers of government.

And here’s the catch — according to recent panels of key legislators and mayors — which part of government needs to be eliminated can differ from town to town, county to county.

The elected officials were at the business school at New Jersey City University last week during an invitation-only event of key business leaders from companies listed in the NJCU New Jersey 50 Index, a fund based on the 50 top public companies headquartered in the state. (Click here for more on the index.)

Kean (R-Westfield), the Senate minority leader, said this could be viewed as a North-South issue.

“South of the Driscoll Bridge, they’re basically on a county-based system on a lot of different things,” he said. “And the counties grew up first, so, therefore, the towns have lesser responsibilities. But north of (Interstate) 195, you could argue they are a lot more like Massachusetts or Connecticut, which got rid of county government.

Fulop said county size is a greater determinant than geography.

“If you were to be bold and be aggressive and say, ‘Hey, I’m going to really get rid of a county government in some situations and municipal governments in other situations,’ you would actually see cost being driven down, because they’re overlapping services in the same exact geographic region,” he said.

Everyone agreed simply “sharing services” is not as simple — or cost-effective — as it seems.

“I do believe that there are things that counties and cities can work on in terms of shared services. But I do understand that this is an 800-pound gorilla in the room saying, ‘Who’s willing to share the money that everyone’s after?’”

Fulop said he learned firsthand that “shared services” can actually increase costs, pointing to an effort he made to consolidate garbage collection with Union City, which neighbors Jersey City.

“(We thought) we’ll have scale, we’ll be able to consolidate routes and we’ll be able to drive down costs,” he said. “In that situation, the bids actually increased because there were less vendors in the state of New Jersey that can actually handle that geographic region.

Oroho (R-Sparta) said it doesn’t matter what layer of government is cut unless there is a true effort to cut costs.

“We have to bring down that total cost of government and one of the key things we have to deal with it: It’s easy in government to make promises. It’s hard to make payments. That’s been the problem over a long time: Republicans and Democrats. Both parties have 50 percent of responsibility.”

“We have to come to grips with the fact that we need to have change with respect to our benefit plans, our pension plans. I’ve always said: ‘Government is 25 years behind business.’ You paved the road for us. All we have to do is follow the plan.”

Read more of ROI-NJ’s coverage of the event: