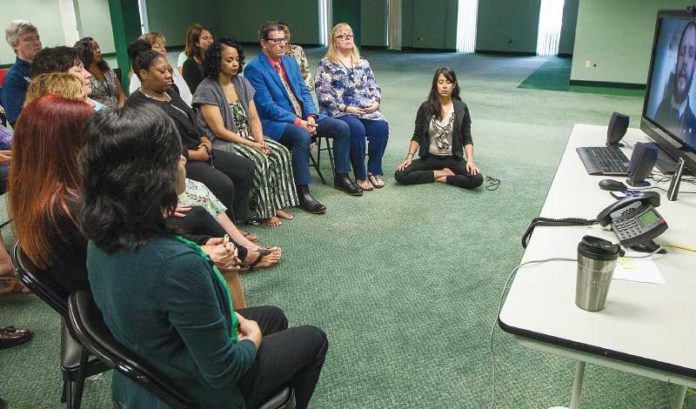 Right now in New Jersey, all eyes are on the innovative, the new.

For National Vision Administrators, a company that has been in business for more than four decades, that doesn’t pair well with the dearth of job candidates for a lot of positions.

“We’re by no means a brand-new startup, and we’re also in a relatively conservative industry,” said David Karlin, the company’s president. “So that (can make it) hard to attract millennials.”

Brushing up against some of the state’s premier North Jersey startup hubs with its Clifton base, the vision benefits firm has had to contemplate — like any firm searching for qualified young talent in this job market — how to stand out.

And all that thinking led to mindfulness.

“To be able to talk about our mindfulness program and tell people every morning and afternoon they’ll have time to stop what they’re doing to go into a room to sit down for a mindfulness practice, millennials in particular are intrigued by that,” Karlin said.

Mindfulness, as Karlin describes it, is a tool for concentration that keeps you focused on the present moment. It’s a concept that developed out of meditation practices commonly associated with Buddhism.

More often not, it’s found more in the workplace than the temple today. It’s being brought there by consultants that employers pay to train staff on these techniques. National Vision Administrators went with Free Form Minds, which is far from the only firm doing this in the region.

Mindfulness is a trendy approach to employee engagement in the human resources world. Karlin’s personal experience with it convinces him it’s more than a fad.

“I’ve been through a lot of these types of programs, and most, if not all, have a big spike, but then they drop off quickly,” he said. “As soon as the interest in the program starts going away, people start to fade out and it starts to disappear. It was important to us that we put together a program that wouldn’t be a flash in the pan, given that we were investing money into it.”

Michael Perry, CEO at Lawrenceville-based Benecard PBF, a company affiliated with Karlin’s, was introduced to the concept six years ago. He has stuck with it ever since rolling it out at his workplace.

He had his fair share of naysayers in the beginning. The obvious question was this: we’re paying these consultants, but are we being mindful of the bottom line?

“It’s something a lot of colleagues asked me,” he said. “It starts with the fact that our employees interact directly with patients. Part of our brand culture is treating patients as individuals, not letting them get lost in the complexities of the health care delivery system. That’s part of who we are.”

Perry believes there’s a lot potential for mindfulness practices in the workplace to align people with that firm-wide philosophy.

“This is a powerful tool in creating empathy in our employees, so they can engage more effectively with patients,” he said. “That’s the value I see in it.”

Companies such as Benecard PBF and National Vision Administrators are carving out spaces in their office layout that are dedicated to daily sessions of meditation and mindfulness coaching, which are often conducted via Skype.

Different departments at the organizations have had different experiences with it. As an example, Karlin said the sales force at his company completely altered the way it did business as a result of these sessions.

“They were able to focus much better — allowing them to do a number of things, such as listen to clients more effectively,” Karlin said. “They were also improving at doing some of the more mundane tasks that they once procrastinated on and then were bogged down with later, which is a problem common to sales teams.”

Outside of anecdotes, there have been some studies potentially pointing to mindfulness decreasing stress and boosting productivity. One of those studies recently appeared in the Harvard Business Review.

“With the science there to back it up, with the major business publication trumpeting it, it seemed like a reasonable way to catalyze efforts in our organization,” Karlin said.

Kevin Kroll, chief operating officer of a sister company, Benecard Services, started this on an individual basis two years ago. He attested to some of the extolled benefits of mindfulness.

“I had a brain aneurysm back in 2010, and one of the post-surgery symptoms to this day is migranes,” he said. “What I’ve come to understand is, migranes can result from stress. So, learning to cope with stress through mindfulness has been beneficial to me.”

Employees in his office are using mindfulness in much the same way, especially the younger staff.

“They’re at a stage where a lot of them are having kids and starting a family,” he said. “So, just like me, it helped them cope with some of the stress of those busy lives. For them, it helps to make things more manageable just to have a break from the day to reset with a mindfulness session.”

It’s in this way that millennials see the value in investing in mindfulness, Karlin said. Even at a storied company like his.

“Having done interviews with a number of millennials, if I can generalize, I’d say they’re much more tuned into this,” he said. “So, here’s something was not planned for retention, but it ended up being that as well as a recruiting tool. That’s just one of the many benefits it’s having for us.”

Reach David Karlin of National Vision Administrators at: david.karlin@benecard.com or 973-574-2400.