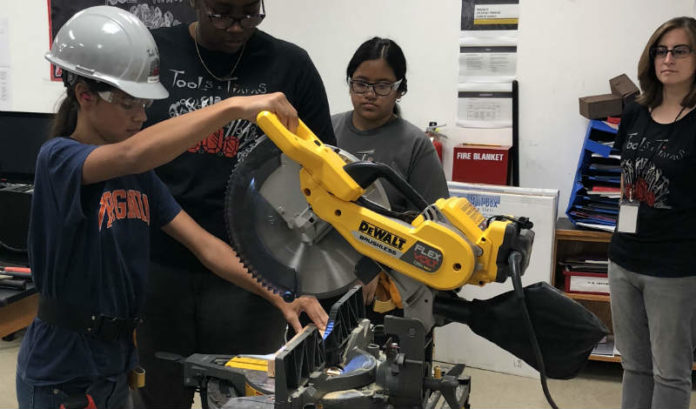 At this unique summer camp, women in the trades teach young girls they can do anything by teaching them construction skills.

Isabella measured and drew the line. And then she measured it again — and cut the pipe.

But, before she could use the soldering gun, Judaline Cassidy reviewed the safety procedures with her one more time.

“Your hands have to be here,” Cassidy said.

It was a stern tone. One of a teacher — one used to show a student safety truly was the first priority.

It was a tone Cassidy and other instructors used during lessons on welding, sheet metal, plumbing, carpentry, wiring, architecture and automotive.

Isabella, 12, nodded. And then she began her hands-on lesson.

Welcome to Tools & Tiaras, the most unique camp in the tri-state area.

“I want this to be like a job site,” Cassidy said. “Safety is everything. They need to learn that.

“When we do things here, the kids will be right next to a trained craftsman. They are going to learn the right way to do it the first time they do it.”

The kids learned a whole lot more than just how to use tools. There was a lesson in self-defense. And there was a talk from two of the few female members of the New York City Fire Department.

There even was a trip to an actual job site.

And each day started with the same chant from campers Cassidy called Princess Warriors.

“Who is awesome?” Cassidy would yell. “I am,” the girls answered.

The responses got louder with each question.

Tools & Tiaras is the brainchild of Cassidy.

She came to the United States from Trinidad and Tobago in 1989.

After struggling to find work that would pay the bills and provide for a good life — she dreamed of being a lawyer, she thought about going to culinary school, she worked as a nanny — she stumbled upon the building trades, choosing plumbing over electrical.

“I had two choices: Get wet or get shocked,” she said. “I chose getting wet.”

More than two decades later — after becoming the first woman to join the Plumbers 371 union on Staten Island, now part of UA Local 1 — she has made it her mission to teach the next generation of girls, especially girls of color, that the trades offer an alternative they may never have considered.

What started with one-day workshops at various locations around New York City culminated in a weeklong summer program at Boys and Girls High School in Brooklyn.

“I started this program because I wanted to inspire little girls to become whatever they want to be,” she said. “I knew, from working in the trades and becoming a plumber, how much I had grown.

“I was intimidated when I started. I was shy. But once I started working with tools, it gave me a sense of confidence. Now, I walk around this world knowing that I’m a superhero because not a lot of women can do this.

Cassidy said it’s never to early to start training — and to stop stereotypes before they start.

“They’ve done surveys and found girls believe they can do anything until age 9,” she said. “And then the images that they see on television and what people tell them changes everything.

“What if they always feel that way and that never changed? What a great world we would have if more women were able to lead and teach and inspire the next generations.”

Jennie Ho couldn’t believe what she was reading.

On a business trip in Asia, Ho — the founder and president of Beiter Technologies in San Francisco — saw a story on Cassidy’s efforts earlier this year and knew she had to reach out.

Half a world away, she had found someone she wasn’t sure existed: a woman fully invested in the construction industry.

“I said, ‘Oh, my God, there’s another woman in the industry that’s doing trades,’” she said. “In the past 10 years, I’ve felt so lonely. I do all these things, fight all these battles by myself. It was so heartwarming when I saw that.

Ho became a board member. And she contributed far more than her time and knowledge. Her company provided all the tools and the toolbelts the girls used during the week.

Ho herself was there every day, having flown to New York City from China the day before the camp started.

“I just wanted to be here,” she said. “I just want to support any woman out there who wanted to do something like this. Looking at all the little girls, they are smiling. When they have the tools in their hands, their eyes just pop.

“It doesn’t matter how much of my time or money I give, because this is something that money can’t buy. It’s so worth it.”

She’s not the only one who felt that way.

Nearly four dozen women volunteered their time during the week.

To donate to the Tools & Tiaras camp, click here.

Sara Ngan is a project manager at FX Collaborative, an architecture firm based in Manhattan.

“This is a natural outgrowth for us,” she said. “Our firm is very much about making sure woman are treated equally.”

Ngan said the ages of the campers really drew her in.

“If you introduce girls early on, they can become familiar with the industry, the tools and the terminology,” she said. “That’s important. If they can see things early on, we can grab them. I think when you are a teenager you are really interested in learning new things. This is where we can pique their interest before you get bogged down with stereotypes.”

Courtney Dantone, a civil engineer who works out of Kiewit’s office in Woodcliff Lake, agreed.

Kiewit, a sponsor of the program, had at least two volunteers every day of the camp.

“We definitely want to support this and see more girls coming through science and education programs,” she said. “It’s something that we’re passionate about.

“A lot of areas have programs where they can learn about science and technology, but not engineering and construction. This is really cool because it’s hands on. It’s not just learning about what classes you can take, but it’s hands on, literally dealing with what we are dealing with every single day.”

Leticia Bradshaw said she grew up watching “This Old House.”

“I watched Bob Vila every week and thought, ‘I want to do that,’” she said.

Then, she faced the reality of the day.

“When I went to high school, we had one woodshop class and that was it,” Bradshaw said. “One for four years.

“And we made one thing, a desk. I’ve been wanting to use a band saw ever since, but where do you go to use those things?

“When I saw this, I just had to sign Tamira up.”

Tamira, who will be in second grade this fall, said she loved the week.

Others at the camp were further along their journey in the industry.

Tanzira, 15, attends the High School for Construction Trades, Engineering and Architecture in the city.

And even though the school has been around for more than a decade, Tanzira said there are few girls in her classes.

That’s what made the week special for her.

“I didn’t know what to expect from this camp, because when I go to my construction and trade high school and it’s male-dominated, you can get let down because you’re the only girl interested in the field,” she said. “But now that I see all these women who are actually in the field, I feel so empowered and strong.

As one of the speakers during graduation, she implored her younger classmates to continue in the industry. Or in anything else they want to do — even if other girls do not.

“Don’t be afraid to do anything that makes you happy — even if it’s a male-dominated field,” she said. “We are amazing when we come together.

“And we can do whatever we set our minds to.”

It has a nine-member board that helps guide it. It is a registered 501(c)(3) nonprofit.

It has a logo and a motto: Where Strong Girls Are Forged.

And it is getting noticed.

A spot on the “Megyn Kelly Today” show brought attention — and donations to Cassidy’s Women You Should Fund page. All of the campers attended for free.

The BBC spent a few days at the camp last week and produced a segment.

“We’ve already heard from people in Poland and Spain who want to bring Tools & Tiaras there,” Cassidy said.

Cassidy wants to expand the program, but she wants to do it right.

And, she notes, she still has a day job — one from which she lost a week’s pay to run the program.

“No trips to Starbucks this week,” she joked.

“We’re still testing it,” she said. “We give workshops once a month at whatever space we can get. We don’t have a dedicated space.

“But we know there’s interest. We’ll post a workshop on our website, and sometimes they are filled within a week.”

Harris, who has worked on union sites for more than two decades, said she hopes Tools & Tiaras is inspiring young girls to follow in her footsteps.

She said the construction trades offer a pathway to a better life that so many females —especially females of color — do not know is out there.

“People are not aware of the salaries that you can make as a construction worker,” she said. “I had a path where I was headed to college, but I couldn’t afford it.

“Women and minorities are the future of unions. But they have to have heart and passion. It’s not easy.”

Cassidy’s desire is to teach the next generation of young girls that they can do anything.

She thinks a pathway through the trades is as good as any.

“I think it’s one of the greatest professions. People go all around the world to visit and pay tons of money to see the pyramids, the towers, the Aztec ruins. They go to all those places to enjoy those things, but they never think about who built them: tradespeople.

“So, what if we make people shift their minds and stop looking down on construction workers and start uplifting them because all the creature comforts we have is provided by trades workers.

“I tell the girls, ‘You know the cloud is a literal place, right?’ We all think our storage and everything is literally in the cloud, but it’s an actual building that’s built by tradespeople. So, you wouldn’t be able to enjoy all of these things that you enjoy if it wasn’t for tradespeople.”

Cassidy hopes more women will join the field. And she hopes Tools & Tiaras will help change that.

“The construction is the only industry where the number of women in it hasn’t changed since 1970,” she said. “It has hovered around 3 to 4 percent.

“What if we do something differently? What if we can bring young girls in and teach them they can do everything a man can do?

“What if we empower girls and they stay empowered?

“That’s what Tools & Tiaras is all about.”