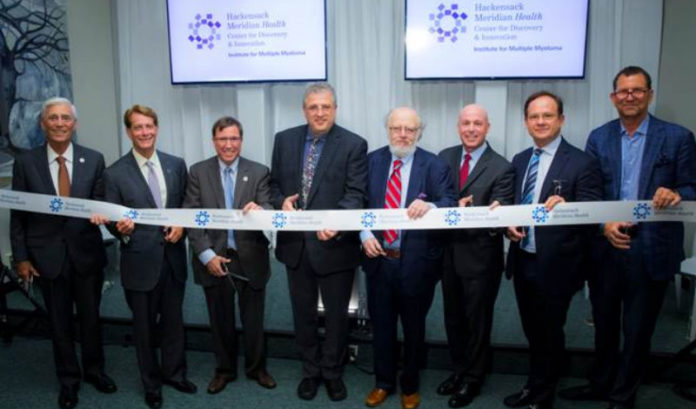 Hackensack Meridian Health announced the opening of its Institute for Multiple Myeloma, in partnership with pharmaceutical company Celgene, at the new Interprofessional Health Sciences Campus in Clifton and Nutley, earlier this week.

The former Roche campus also is the site of the hospital’s new School of Medicine at Seton Hall University.

The institute has been anticipated for some time and represents the health system’s latest move to compete on a national level.

“This new center takes us a quantum leap forward in the fight against multiple myeloma and related illnesses,’’ HMH co-CEO Robert Garrett said. “This helps us achieve something that has been elusive — curing significant numbers of patients.’’

Dr. David Siegel, the founding director of the institute, is chief of the Multiple Myeloma Division at John Theurer Cancer Center at Hackensack University Medical Center and hematologist at the Regional Cancer Care Associates.

“We seek to transform the treatment of patients with multiple myeloma by integrating our extensive clinical expertise and research contributions with ongoing basic and translational research,’’ Siegel said.

Dr. Andrew Pecora, the chief innovation officer at HMH, said myeloma is an important sector for the health system to get into.

Pecora said Siegel is a thought leader on the topic. He feels Siegel’s knowledge, paired with Celgene — which is focused on the sector — is going to create an exciting dynamic for the state.

“You have this environment that just attracts the brightest and best scientists,” Pecora said. “You partner them with the brightest and best doctors with the largest clinical program. And then you have a company, Celgene, (with the) mission to cure myeloma. All those pieces came together, I don’t think it was sort of all thought from end to end.”

The combination, however, is tough to beat, Pecora said.

“The fact that Roche decided to leave the campus, the fact that we were able to get it and put the medical school there, the fact that we have been doing clinical trials with Celgene for decades — all of those things went into the magic moment,” he said. “Here we are.”

“There’s a couple places in the United States — so there’s Cambridge (in Massachusetts), the Research Triangle (in North Carolina), Scripps (in Florida) — there’s not that many of these. Now we have one in New Jersey where you have industry partnered with basic science partnered with clinical, all for the betterment for a specific problem — in this case, multiple myeloma.”

Multiple myeloma is when cancer cells accumulate in the bone marrow, where they crowd out healthy blood cells and make the bone weak. This is especially a problem for older patients, as the aging population increases in the country.

“Myeloma is among the liquid tumors that is increasing in incidents as people are getting older,” Pecora said. “Up until recently, it was a devastating disease where most people died.”

In the past five to seven years, people like Siegel, and companies like Celgene, have been working to reduce the tumors’ effects, he said.

Pecora acknowledges partnering with a company brings its share of criticism, such as potential conflicts of interest.

“Yes, those are real, and you have to take care of them,” he said. “But I love the idea of the entrepreneurial spirit. Patients benefit and New Jersey benefits. The reason for (pursuing) myeloma is, we’ve hit critical mass. You have a company that’s dedicated to the disease, you have one of the biggest clinical programs and one of the world’s leaders on myeloma, and it just all came together.”

When asked about New Jersey’s U.S. Senate race that has brought Celgene’s history of pricing cancer drugs to light — as Republican candidate Robert Hugin, the former Celgene executive chairman and CEO, attempts to unseat Democratic incumbent Sen. Robert Menendez — Pecora said it is not an issue.

“When they do bad things and deserve to be called out, they should, and, when they do great things, they should get that attention as well, as should their shareholders. What I care about is the patients. I don’t have the ability to develop all the new drugs at Hackensack Meridian … that’s what the life sciences industry does. I want to help them with their job, so they can help us with our job.”

For Horizon and partners, pandemic has only strengthened resolve to fix...