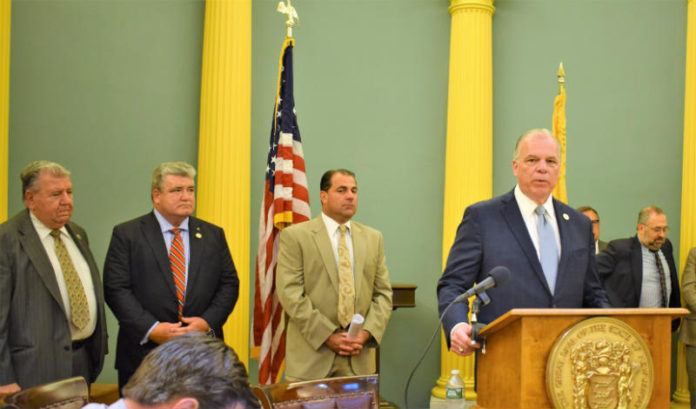 A new bipartisan report analyzing the inefficiencies of state and local government and the hefty property tax burden on residents was released Thursday afternoon by a group of legislators and experts around the state.

“The fiscal future of New Jersey is bleak.”

That was the opening line in the section dedicated to pension and benefit reform.

The Economic and Fiscal Policy Review Committee’s report paints a sobering picture of the state.

In its statement of purpose, the group of 25 legislators and experts said, “New Jersey continues to struggle with inefficiencies at all levels of government.”

The committee was formed by state Senate President Stephen Sweeney (D-West Deptford) in February. It was tasked with reviewing the impact of federal policies on the state’s affordability and economic climate, which could lead to legislative solutions.

Many of the recommendations have been previously discussed in the state over the years, including consolidation of municipal governments and school districts, health and pension reforms and addressing the property tax burden.

But some were a reaction to the recent $10,000 state and local tax deduction cap at the federal level.

For S-corp businesses in the state, the group recommended a change in the way they pay taxes, in an effort to help reduce the burden of property taxes.

According to the group, the state collected $28.8 billion in fiscal year 2017 in property taxes, which is twice the amount of income taxes and three times the amount of sales taxes collected. As a result, enabling subchapter S-corporations, limited liability corporations and partnerships to pay taxes equivalent to their gross income tax obligations would allow them to make the state tax payment deductible on their federal taxes.

“This tax payment practice was in place from 1976 to 1993 and takes advantage of the fact that the federal tax law allows corporations, but not people, to deduct the full cost of their state and local taxes,” the group wrote in the recommendations.

“This change will provide a $450 million a year federal tax cut for the majority of New Jersey small business owners, professionals and their families, at no cost to the state.”

Gov. Phil Murphy issued a statement after the recommendations were issued.

“We thank the Senate president for his working group findings and look forward to reviewing the group’s recommendations,” Murphy said. “My administration stands ready to listen to any and all ideas on how to build a stronger and fairer New Jersey without unfairly burdening the middle class.

“This administration inherited a fiscal mess, taking office after eight years when the conventional wisdom in Trenton was to keep millionaires and billionaires from paying their fair share while slashing benefits for middle-class workers. Our problem isn’t simply how much state government spends — it’s how. Protecting tax breaks for the wealthiest and special interests while asking the middle class to shoulder more and more of the burden isn’t fair and is the wrong approach to getting our fiscal house in order.

“We have a bold, smart, and inclusive economic vision for how New Jersey’s future can work for everyone. This includes reliable and efficient mass transit as both an economic engine and a way to improve the daily lives of hundreds of thousands of commuters, a thriving innovation economy with good-paying jobs in tech and the life sciences, a fast-growing clean energy economy, affordable higher education and a plan to fully fund our public schools.”

New Jersey Chamber of Commerce CEO and President Tom Bracken said in a statement that the group’s recommendations are an important step, but more time is required to digest and analyze the details.

“Many of the long-term and systemic economic problems the workgroup identifies will be tough to solve and will require sacrifices and compromises on all sides,” he said. “We need to fully vet the recommendations with all involved parties, so everyone understands the direct impact and the unintended consequences that could result from them.

“I have had the privilege of working with many of the members of the workgroup on tax reform and on the Transportation Trust Fund and I know the quality of their work and the value of their insight. They all have the best interest of New Jersey in mind and that certainly shows in the work they have done here. We all hope that the bipartisan spirit in which this workgroup was supported will continue as we look to move forward with its recommendations.”

“While these ideas will require further review and appropriate stakeholder input, there is no question New Jersey needs to plan and adopt long-term, sustainable solutions to our fiscal challenges,” she said in a statement.

“We need to see New Jersey’s future through the lens of regional competitiveness and affordability and many of these initial recommendations make a good first step in that direction.

“NJBIA looks forward to working with the Legislature to advance proposals that will begin to set New Jersey on a path of economic vitality and business prosperity.”

Whether or not these make it into legislation that eventually passes into law remains to be seen — or if any are addressed at all.

“We cannot continue to operate without addressing the state’s tax structure and the continuous burden it places on New Jersey’s taxpayers,” she said in a statement.

“The challenge for this group was to help identify solutions so we can mitigate this burden and grow the economy. Their work is done and now ours begins.”

Sen. Steve Oroho (R-Sparta) said there is a new political will to tackle some of these older ideas.

“A lot of these suggestions have been studied before, but now we are going to have the political will,” he said.

Sweeney said that there could be fights over specifics, but if anything changes in the state, that is bound to happen.

Sen. Anthony Bucco (R-Randolph) echoed some of Oroho’s comments, adding the goal is to address, in part, the outmigration of residents and businesses.

“It’s going to take the courage of the legislature to put some of these initiatives through,” he said.

Members of the committee include Sweeney, Oroho, Pintor Marin and Bucco, as well as: