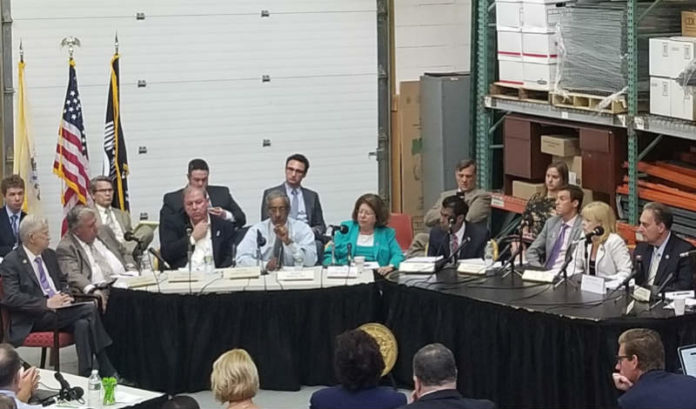 Before President Donald Trump implemented steel, aluminum and other trade tariffs, the biggest issue facing New Jersey’s manufacturing industry was how to grow in a high-cost state.

Tariffs have now piled on yet another potential barrier to growth — which many manufacturers see as just another tax to their business — according to several who testified at a Manufacturing Caucus hearing Tuesday in Metuchen.

They have affected short-term growth plans, and many fear they could affect some long-term plans, as well.

About 30 manufacturers were present at the bipartisan caucus’s hearing Tuesday and spoke about the tariffs, as well as apprenticeships and the effects of a potential $15 minimum wage in the state.

“You can’t make America great again and put New Jersey manufacturers out of business — which is essentially what is happening — and we are supporting companies overseas,” state Sen. Vin Gopal (D-Ocean Twp.), chair of the caucus, said.

Companies have not yet passed on the costs. They are absorbing them — for now.

Marcia Frieze, CEO of Case Medical in South Hackensack, said she cares more about her customers than about the profits. The problem with the tariffs is that they are affecting the supply of raw material.

As the tariffs have ramped up, larger companies, especially in the automotive and aircraft industries, have been buying ahead and hoarding the supply.

“It’s not just price, it’s actually supply, which is even worse,” Frieze said.

The cost increases have ranged from a 10 percent increase to as much as double for raw materials, several manufacturers said Tuesday.

Gary Duboff, president of Saddle Brook-based Arrow Fastener, told legislators that, while he has been hit by the tariffs, his competitors are unaffected because they are importing finished products — which are not yet subject to tariffs.

“It’s costing us profit. It won’t cause us to go out of business,” Duboff told ROI-NJ after the hearing. “Thinking about what the plan should be, if these tariffs don’t go away, is an issue for us. So, we’ve got to come up with some type of alternate plan. If the tariffs never go away, what will we do?”

That ranges from moving equipment out of state, or to another country. A heavy lift for a company of 350.

“Long-term, it’s an issue,” he said. “Short-term, we’re hoping that this is actually going to go away and this trade war will end. This can’t continue forever. But how long it continues, we don’t have an answer to that.”

Jim Minadeo, owner of Frenchtown-based Zero Surge, said his customers were wary about moving forward with capital improvement plans, which included installing his surge protectors, in 2017.

“I noticed in the beginning of ’17 there was a lot of hesitation, because, being a totally new political regime — that wasn’t one of the standard Democrat or Republican (administrations), where everybody can plan ahead — it was this total X-factor. So, I saw a lot of our larger projects get held up for six months, because they didn’t know which way to play because (Trump) was inconsistent,” Minadeo said. “But, then, they said they realize the new model is not having a model, so we’ll just forget about him and work. But, then, these tariffs threw that uncertainty all of a sudden again. At first, I (thought) we aren’t in the steel industry, and then you realize. I thought it would take a lot longer for those tariffs to affect us, but then I was getting emails from suppliers … they all sent out emails saying, ‘Tariffs are coming, we’ll do our best … but costs are going to go up.’”

His biggest customer is Wendy’s, which uses the company to protect all cash registers and menu boards, and he recently began working with Long John Silver’s.

“We’re getting new customers. The problem is, we’re at capacity, sort of, but we have to hire more people, so, which way do you hire?” he said. “If the cost of materials is going up, the costs of products will go up, and maybe the orders will slow down.”

Last year, Minadeo said, his plans included a marketing and sales push. That may have to be set aside if his profits are cut too deep.

John Kennedy, CEO of the New Jersey Manufacturing Extension Program, said the conversation needs to continue with the caucus.

“We’re 49th or 50th in business-friendly. That doesn’t change with the steel issue or the aluminum issue,” he said. “We forget that it’s not that long ago that we destroyed, in this country, the steel and aluminum industries. And we had to deal with that. Manufacturers deal with this stuff constantly. This is just another speed bump we have to take on. The problem is, what are we going to do about it? I say that not just to the caucus, but to the industry. We’re finally starting to get some groundswell.”

Assemblyman Anthony Bucco (R-Randolph) said the caucus can work on legislation, like the one his father, Sen. Anthony Bucco (R-Denville), and he have sponsored, but that the state needs to continue to mission of the caucus — to find out what the industry needs to stay and thrive in the state rather than leave.