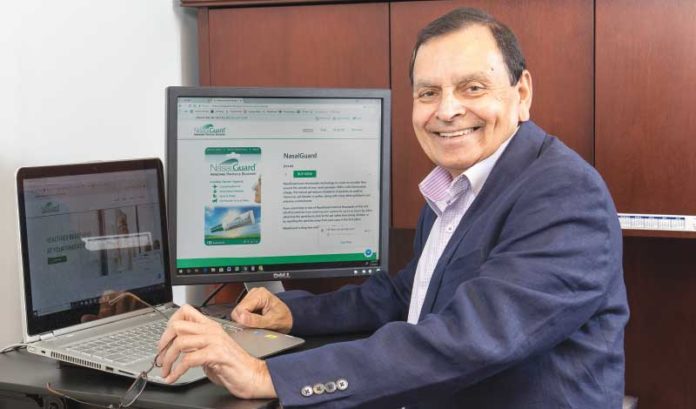 Ashok Wahi said he simply did what any concerned parent would.

“My daughter Aikta used to suffer from cat allergies,” he said. “If she entered a room where a cat had been, her eyes would water, her nose would run and she would be totally miserable.

“Over-the-counter medications would make her drowsy, so, I thought, there must be a way to instead filter out allergens before they are inhaled.”

Wahi therefore created Trutek Corp., a research and development firm in Somerville, to manufacture topical products such as NasalGuard, a unique, electrostatic topical nasal gel that creates a safe, invisible filter for the nose against harmful microscopic airborne particles.

Since its creation in 1995, Trutek has sold more than 12 million tubes of NasalGuard globally, earning more than $10 million in revenue.

And its first customer is now its leader.

She is launching a reformulation of the product to not only continue preventing allergies, but to address poor indoor and outdoor air quality.

“The best part is, it is entirely made in New Jersey,” she said.

No stranger to the family business, Aikta Wahi said she grew up watching her father — who, after studying mechanical engineering, emigrated from India to the United States to study operations research at New York University — work as an engineer by day and on formulations for NasalGuard at night.

He then decided to open his own consulting and engineering practice, he added, designing research and development spaces for scientists and higher education institutions.

It was at that time, however, that his daughter’s allergies began acting up.

Ashok Wahi incorporated Trutek in 1994 before patenting NasalGuard in 1995.

It was not until a decade later, though, that Aikta Wahi would join the company.

After graduating from New York University’s School of Law and entering a career in banking and regulatory compliance, Aikta Wahi said she felt she had reached the end of her time at her employer.

“I was looking for new jobs in which to move up, but, the more I thought about it, the more I realized I did not want to continue down that path,” she said. “I wanted to instead be part of the creation of something, rather than working as a cog in the wheel.”

Her family’s business, she said, had literally been under her nose the entire time.

“I then had the great opportunity to come back and work with my family on an issue I care about,” Aikta Wahi said.

She had good timing.

The company knew it needed to expand its product offerings. Its customers were telling them so, Ashok Wahi said.

“We were being approached by people who did not have allergies but were instead bothered by indoor air quality, as well as those who knew they were going to be in confined and contaminated spaces, such as airplanes, for several hours,” he said. “I knew the feeling, having frequently traveled overseas myself.

“You may not be physically sick when you leave a plane, but you certainly feel as if something has happened to you during the flight, as if you have lost all of your energy.”

Aikta Wahi said she, too, had learned how breathing contaminated air has proven to exacerbate chronic respiratory issues and fatigue.

So, together she, her father, and her sister, Kanika Wahi, a biomedical engineer, would co-invent a new patent in Trutek’s on-site laboratory to address a wider spectrum of airborne contaminants, including particulate matter 2.5 micron in size known to cause cancer and Type 2 Diabetes, Ashok Wahi said.

Today, the FDA-approved, drug-free and water-based NasalGuard can simply be applied around one’s nostrils and upper lip to block the inhalation of harmful airborne contaminants such as virus-sized particles, pollutants, mold and pollen, pet dander and dust mites from entering the nose.

“It is a preventative measure, much like using sunblock before you go to the beach,” Ashok Wahi said.

Each tube, which contains nearly 150 applications, currently is available for purchase on NasalGuard’s website and Amazon for $14.85.

“We also are able to produce this entire product in New Jersey,” Aikta Wahi said. “The tube is made in China, but we make and fill the product here, as well as design our graphics.

“There is a lot of expertise and talent in New Jersey that we are able to utilize.”

Ashok Wahi said he also takes pride in the fact that all of the ingredients are from the U.S. and all of NasalGuard’s manufacturers are in New Jersey.

“This country has given me so much,” he said.

Ashok Wahi said he plans to continue patenting and releasing future topical products after launching the reformulation of NasalGuard, in hopes that the company will become a $30 million business in New Jersey within five years.

But for now, Aikta Wahi said, the company is focused on not only driving awareness of NasalGuard but also the widespread issue of both indoor and outdoor air quality.

“I don’t think people necessarily recognize the degree to which they are constantly breathing contaminated air,” she said. “We hope to better educate people about that.”

More than a dozen wildfires were burning in California during the writing of this article.

With more and more studies linking pollutants and contaminants to serious and chronic diseases, both Trutek and NasalGuard wanted to try to help.

“We addressed the subject at the simplest level: prevention,” Ashok Wahi, founder and president of Trutek Corp. in Somerville, said. “With all of the fires currently happening on the West Coast, we donated 10,000 units of NasalGuard to the Red Cross.

“Then, as families and firefighters started coming back for more product, we donated another 5,000 units — and we will continue to donate more.”

Aikta Wahi, president of NasalGuard, said her father, Ashok Wahi, founder and president of Trutek Corp. in Somerville, does not use Facebook.

“He would therefore not know what a Facebook advertisement should look like, or what people expect to see to want to interact with companies like ours online,” she said. “The product was originally developed in the 1990s, and so much has changed since then in terms of consumer marketing.

“I thought that I would really bring something new to the table in that sense when I joined the company.”

“We think there are a lot of interesting ways in which we might partner with companies with this product,” she said. “But, right now, the cool thing about digital marketing and social media is that we can see in real time who is responding to our messaging.”

That will help further the company’s goal of better understanding who their consumers are and who they still need to reach, Ashok Wahi said.

“Through our direct-to-consumer sales, we learn as much from customer input as we can, so we can take that education and continue to partner with larger entities,” he said. “That will hopefully then enable us to get into retail stores such as Walgreens, CVS, Walmart, Target and more.”